BEIJING, Nov. 1 (Xinhua) -- The Chinese economy has maintained a steady upward momentum as a pro-growth policy package was implemented on the ground to seek the best possible full-year performance.

The latest purchasing managers' index for the manufacturing sector showed factories were confident in the warming trend in the near term, according to the National Bureau of Statistics (NBS).

Despite a slightly retreating headline index, the sub-index for production and business expectations stood at 52.6, well above the boom-and-bust line. The readings for industries like agricultural and sideline food processing, as well as electrical and mechanical equipment manufacturing, topped 58.

This optimism, despite lingering economic headwinds, could be seen in the form of roaring machines and busy shipping routes across the country.

Wuhan Associated Marine Transport Inc., the ship owner, expects the transport demand to increase further with the arrival of the peak shipping season during the rest of the year.

With the approach of winter sparking the need for heating equipment, export-oriented home appliance makers concentrated in coastal regions, including Zhejiang and Guangdong, are working at full capacity to meet surging orders from overseas.

China introduced a policy package for stabilizing the economy and added follow-up measures to cope with shocks from greater-than-expected factors since April this year.

Thanks to such timely and decisive moves, the economy reversed the feeble performance seen early in the second quarter and has started to gather steam.

During the remainder of the year, government support for economic recovery is expected to continue.

A State Council executive meeting last week urged full policy delivery to consolidate the upward trend. Policies such as tax refunds and deferrals, fee cuts, and pro-job subsidies will be thoroughly executed, and efforts will be made to ensure stable energy supply and smooth logistics services.

Also worth expecting from the fourth quarter is improved consumption as annual online shopping sprees this month and in December normally contribute to a peak season for retailers and producers.

While the "Double 11," which falls on Nov. 11, is right around the corner, local governments have also introduced measures to spur consumption and support businesses. This will give the market a new round of opportunities for further recovery.

Looking ahead, NBS spokesperson Fu Linghui expects that fully unleashed policy potential and stronger market vitality, stimulated by reforms, will help consolidate the foundation of recovery and keep the economy operating within a proper range.

"We strive for the best results possible," he said. 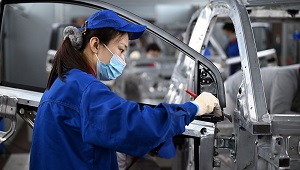