Hearts Pulled Together by Culture

Chen Hong, a young fellow from Anhui Province kicked off his motor ride from early June to Xinjiang. His dream was to cover both sides of the Tianshan Mountains, despite the scorching heat and strong wind.

When our reporters met him in Hotan, Chen had traveled more than 9,000 kilometers. With great excitement, he showed us the photos he took along the way: the Gobi desert, snowcapped mountain peaks, and grasslands, the home-stays, bazaars and night markets, and ancient towns, garrisons and stone paintings. “It’s such a great joy to travel to Xinjiang for the beautiful scenery, the delicious food, and the splendid culture”, Chen said.

Tourism was a booming business in Xinjiang this past summer. The beauty of Xinjiang has attracted countless tourists this year. Many netizens exclaim how many of their friends are traveling in Xinjiang in the Wechat Moments they post. 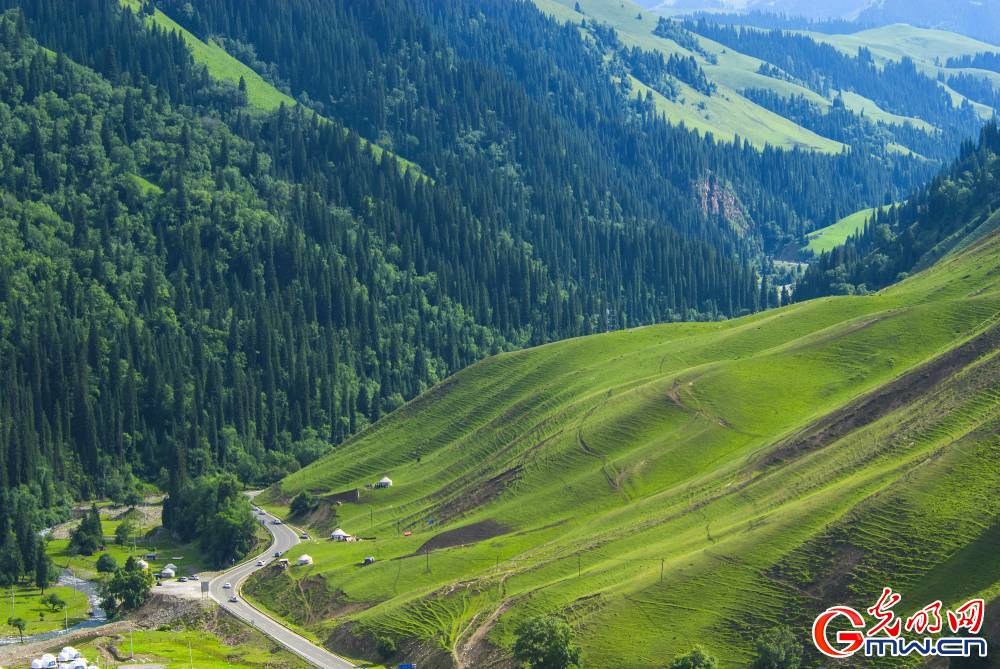 Songs and dances only represent a tiny part of the attraction because in Xinjiang, “people who can talk can sing, and people who can walk can dance”. Indeed, Xinjiang is a land overflowing with a rich culture.

As night falls, tourists from all over the country mingle with the locals in the Night Market of Hotan. The New Jade Dancing Troupe, which was established 72 years ago, entertains its audiences with well-rehearsed programs. The song “The Party’s Policy’s Wonderful”, has pushed the vibe to its climax thanks to the Uygur way of presentation that combines monologue, singing and dancing.

As the lyric goes, “What’s wonderful? What’s Wonderful? The policy of the CPC Central Committee is wonderful! Mehmet feels joyful today as we follow the direction pointed by the 19th CPC National Congress. The entire Hotan is singing as the ancient city opens a new chapter…”

Tusunjiang Abduala, deputy head of the troupe, said “Our troupe was named by Premier Zhou Enlai. We all cherish this great honor. Over the years, we have produced and performed many song and dance shows reflecting the progress of ethnic unity, which are very popular among the locals. The ‘Party’s Policy’s Wonderful’has been shown on the stage for 16 years, and it’s constantly updated to reflect the development of the times, using the form of song and dance to spread the policies of the Party such as free schooling and healthcare, poverty eradication and rural revitalization. It’s a show that people fall in love instantaneously and that’s why it’s popular both at home and abroad, and it even went to the stage of the Spring Festival Gala”.

As the ancient desert city glows with neon lights, cultural tourism has become a barometer of regional development. In the night market of Hotan, we’ve seen a new Xinjiang growing with the charm of culture.

Culture is the silent, soft power that nourishes a place. As Chinese philosophy believes, “humanity is cultivated by culture”.

Xinjiang has shown an unprecedented momentum of cultural development in recent years. The movies “The Wings of Songs”, “Why are the flowers so red”, and songs such as “You Came to Tianshan in July”, “Your Words are Our Favorites”, and the large-scale show “Lift your Headscarf - Xinjiang is a Good Place” are like spring water that nourishes the minds of people of all ethnic groups living on both sides of the Tianshan Mountains. 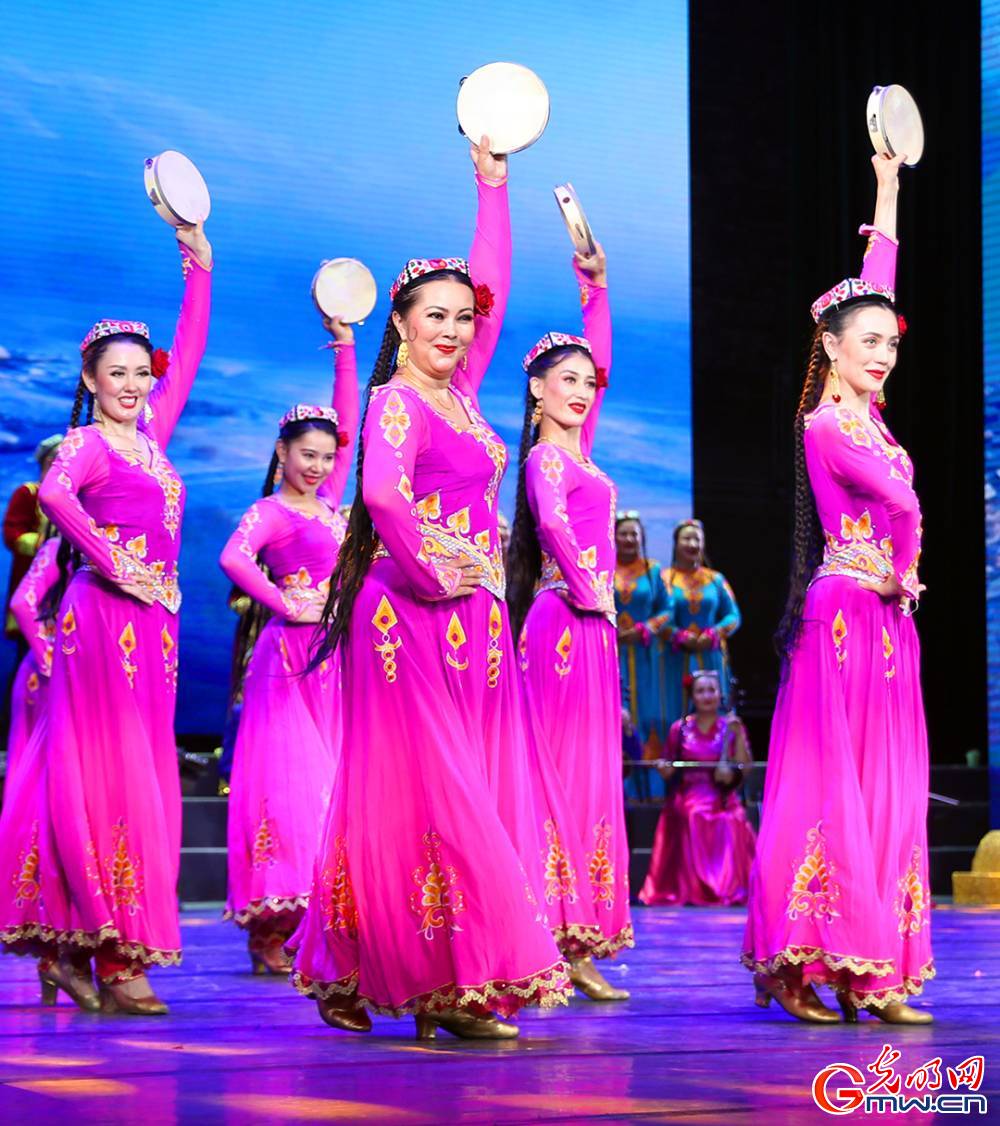 Jointly produced by Beijing and Xinjiang, the dance drama “Five Stars Rising from the East” tells the story of a Han Dynasty brocade piece unearthed from Xinjiang that carries the line “Five Stars Rise in the East Favoring China”. The show was a spectacular hit in Xinjiang as it explains the theme that people of various ethnic groups “cling together just like pomegranate seeds”.

“The strategy of ‘Nourishing Xinjiang with Culture’ is of great significance as it’s an integral part of the Party’s governance approach in Xinjiang in the new era proposed by General Secretary Xi”, according to Zhang Chunlin, deputy party secretary and head of publicity of the CPC Xinjiang Autonomous Region Committee. “We must cultivate people’s minds and pull people together with the profound culture of the country, and consolidate the cultural identity of the Chinese nation”.

On the vast land of Xinjiang, there are countless legendary stories behind its numerous monuments and cultural relics.

The Jirentai Valley ruins in Nilek County, one of the “Top 10 New Archaeological Discoveries in China” in 2018, is a settlement site from the Bronze Age with great academic value for the study of the chronological staging, genealogy, settlement pattern, social conditions and cultural exchanges between China and the West in the prehistoric period of Xinjiang.

The Shichengzi ruins in Qitai County, one of the “Top 10 New Archaeological Discoveries in China” in 2019, is the former site of “Shule City” where Geng Gong was stationed in 75 A.D. The remnant walls, corner towers, moats and gates showcase the military and political measures introduced in Han Dynasty to govern the northwestern part of the country.

The Kyaikudok Beacon Site in Yuli County, one of the “Top 10 New Archaeological Discoveries in China” in 2021, is a grassroots military administration site along the ancient “Loulan Road” in Tang Dynasty. It proves that as early as Tang Dynasty, the northwestern region had already been under effective jurisdiction of the central government. ............ 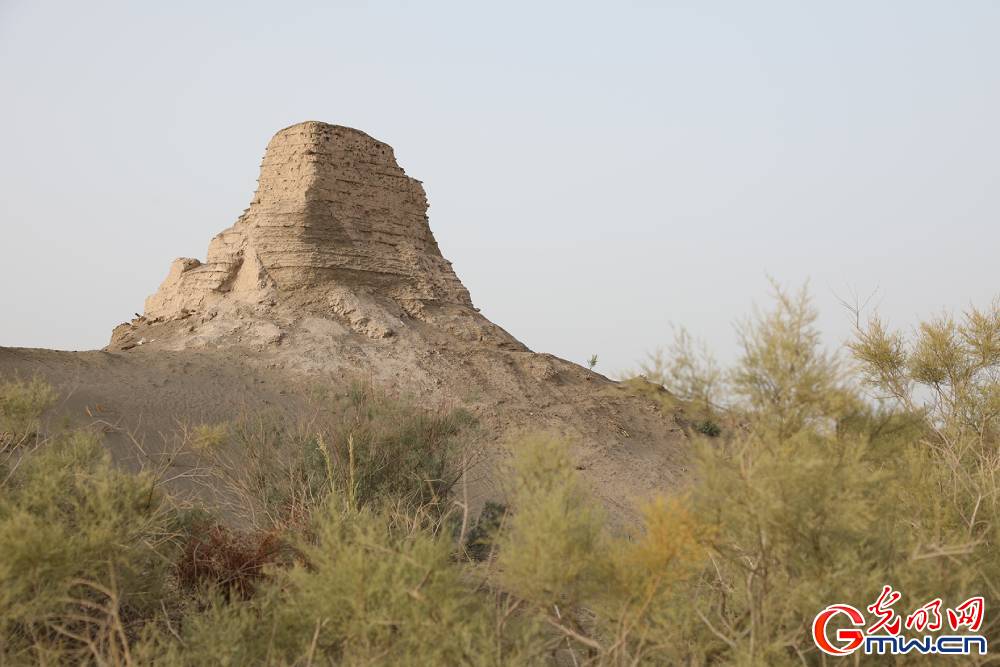 “Over the years, archaeological discoveries are introduced to all ethnic groups in Xinjiang in a tangible, perceptible and effective way, deepening people’s awareness that Xinjiang has been an inseparable part of China’s territory since ancient times and enhancing the collective identity of the Chinese nation,” said Li Wenying, director of the Xinjiang Institute of Cultural Relics and Archaeology.

At the height of summer, the Nalati grassland in the Ili River Valley is an eyeful of green. On the flat pasture are large flocks of sheep, horses, as well as herdsmen, yurts, streams, bushes and endless rape flowers that attract a steady stream of visitors. 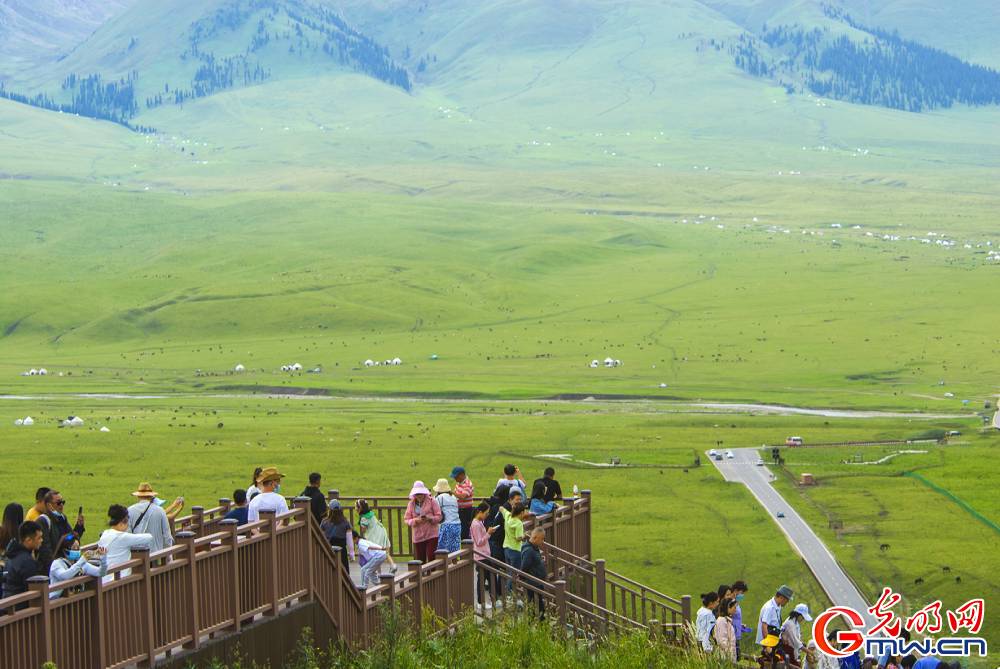 The melodious and high-pitched song “The Big River” permeates the river valley and grassland, carrying the singer’s love for his hometown to places far away.

Captivated by the beautiful grassland and the positive changes in his hometown, Wan Haitao, a musician in Chengdu, came back to his hometown. Three years ago, he put together a Nalati band of 13 members. Now the band has become very popular in the region. They write and present new songs using electric bass, drum set, as well as traditional instruments dongbula and sebuzik. They also sing classic songs such as “In That Faraway Place”, “Beijing’s Gold Mountain” and “Kangding Love Song” to show the beauty of the grassland and the charm of ethnic culture.

“Although the grassland is not as prosperous as the city, everyone is willing to sing at our hometown,” Wan, the Band leader, said. “We hope to touch more people with our music and enrich the culture of Xinjiang.”

Tourists would interact with the band when it plays music, and behind the joyful crowd one can see the magnificent Tianshan Mountains from afar. It is in this jubilant scene that people can’t help but think, isn’t culture like the water melted from mountains that moistens the land of Xinjiang? 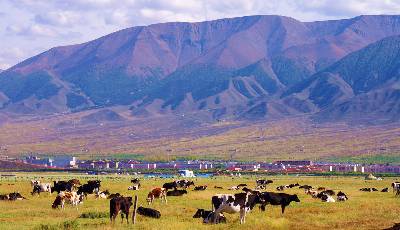