The Belt and Road Initiative (BRI) is opening up the world. The BRI aims to promote connectivity of the Asian, European and African continents and their adjacent seas, and set up connectivity networks. Since then, transportation of goods from China to Europe and vice versa has changed dramatically. Central Asia, which had great historical importance but has not been economically developed the way it might have been, is now experiencing robust development as these rail and road lines go through them. 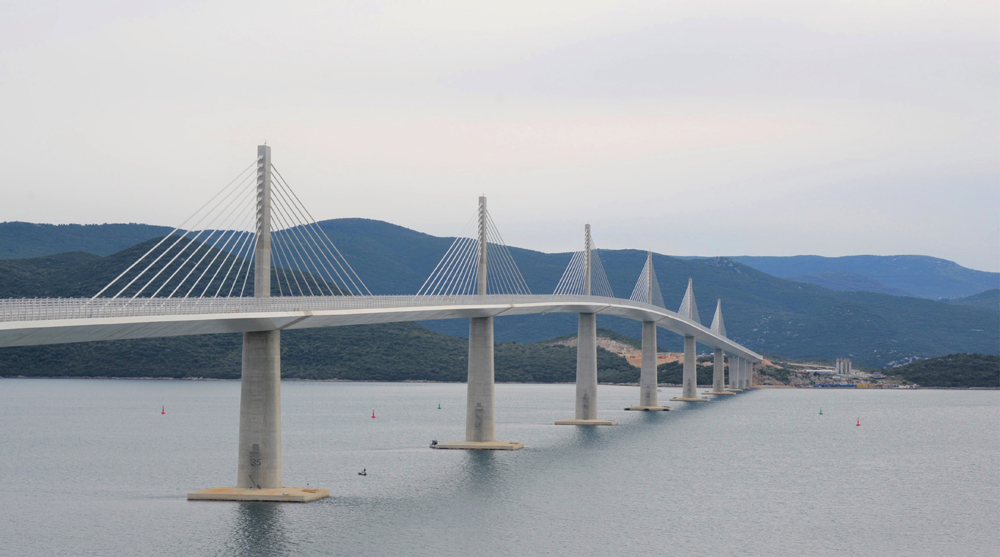 Photo taken in July, 2022 shows the China-built Pelješac Bridge in Komarna, Croatia, as it officially opened for transport. The bridge is the largest infrastructure project undertaken by China in Croatia. (Photo provided by "Forging Ahead in the New Era" Exhibition)

The three continents of Asia, Europe, and Africa account for over 85% of the world's population. If one could open up the transportation, telecommunications, and energy links between those three continents, the world will stride fast forward, particularly for the developing nations. And that's what the BRI is doing. It is putting in place the infrastructure to enable Africa, Asia, Europe, and also South America to come up to the levels of the advanced world.

Why is China doing this? Some say China wants to become an "empire" to dominate the world. However, by looking at Chinese history and Chinese thinking, one would find that the Chinese probably think the Americans are mad to want to be in control of the world. It would incur a lot of costs, a lot of military expenditure, and a lot of decisions to focus on military control of other areas that Chinese people don't want to waste their time doing. China wants to help the world become peaceful. It wants to help the world become more developed. China will give other countries every assistance to move them away from poverty. Photo taken on July 29, 2021 shows a view of the China-built Turgusun hydropower station on the Turgusun River near the city of Altai, Kazakhstan. This is the first key China-Kazakhstan cooperation of hydropower project under the Belt and Road Initiative. (Photo provided by "Forging Ahead in the New Era" Exhibition)

Hence, what is the motivation for the BRI? The main purpose is to build a more developed, and safer world. As for the community of a shared future, — the important word is "shared". According to what President Xi and the national leadership's statements on common prosperity, sharing is the right way to have a peaceful society. A society might reach relative levels of prosperity through people's hard work, innovation, and other things. But if it is not built on the principle of sharing, then it becomes a divided society, which is not effective.

China's approach to prosperity and progress is evidently different from the West's. In the West, people talk about achieving progress by incentivizing people with becoming rich. Whereas China's main goal is to provide a better standard of living for everyone, which it hopes to actualize through the BRI. The BRI is an embodiment of China's ideal of creating a community of a shared future, and it is going to make the biggest change in world history up to now.