Space station completion to be a milestone in Chinese space exploration

China’s space station is near completion, as the second and final lab module, Mengtian, has been launched into space and docked with the space station combination.

The Tianhe core module will be the management and control center and the main living space for the crew, and will support some scientific and technological experiments. The core module has two berth ports connecting to the two lab capsules, and three docking ports for the crew spacecraft, cargo and other craft. It also has an exit for astronauts to conduct extravehicular activities (EVA).

The first lab capsule, named Wentian, will function both as a backup of the core module and as a powerful scientific experiment platform, mainly focusing on the research of life science and biotechnology.

The in-orbit construction of Tiangong officially kicked off in April 2021, when Tianhe core module was launched into space.

More than a year later, the first lab module, Wentian, was launched in July 2022. After initially docking on the front port of Tianhe, Wentian conducted in-orbit transposition in September 2022 and moved to its permanent docking port on the left side of Tianhe’s, forming an L-shaped combination with the core module to await the arrival of Mengtian. Mengtian was launched on October 31, 2022 and successfully docked with Tianhe’s front port. On November 3, Mengtian conducted transposition and moved to its permanent docking on the right side of Tianhe.

As Mengtian completes transposition, the basic structure of Tiangong is completed, forming a T-shaped combination with the Tianhe core module at the center and the two lab modules on each side.

The building of Tiangong marks a milestone in China’s three-decade effort to advance its manned space program. It will complete the final goal of China’s “three-step” human space program initiated 30 years ago.

Once complete, the space station will be China’s main platform for space science research, supporting large-scale scientific, technological and application experiments. It will operate in the low-Earth orbit at an altitude from 340 km to 450 km for more than 10 years, and will be able to accommodate three astronauts in normal circumstances and up to six during a crew replacement. China’s space station is the first project of its kind that is open to all UN member states. As the International Space Station will possibly retire after 2024, China’s space station will likely become the only operational space station in Earth’s orbit.

The space station is expected to contribute to the peaceful development and utilization of space resources through international cooperation, and to enrich technologies and experience for China’s future explorations in deeper space. Through cooperation, China aims to build its space station into a scientific research platform shared by the world and benefiting all humankind.

- The lab module docked with the node cabin of the Tianhe core module and formed a linear shape at 3:13 a.m. Monday (Beijing Time), after it entered the planned orbit and completed state setting. The whole process took approximately 13 hours

- Wentian lab module moved to the permanent docking port with the assistance of a transposition mechanical arm, forming an L-shaped combination with the core module to await the arrival of lab module Mengtian, which is scheduled to be launched in October

- Transposition lasted around one hour, and was completed at 12:44 p.m.

- The whole process of rendezvous and docking took approximately 13 hours

Nov. 3, 2022: Transposition of Mengtian and completion of the T-shaped structure of the space station

- Mengtian successfully completed in-orbit transposition at 9:32 a.m. (Beijing Time). Mengtian first completed its state setting and then separated from the space station combination. It next conducted transposition and docked at the side port of the core module’s node cabin.

- This transposition marked the formation of the space station’s basic T-shaped configuration, representing a key step toward the completion of China’s space station 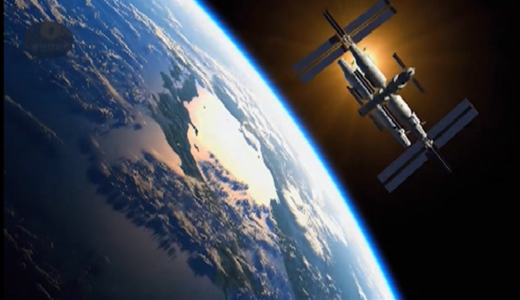