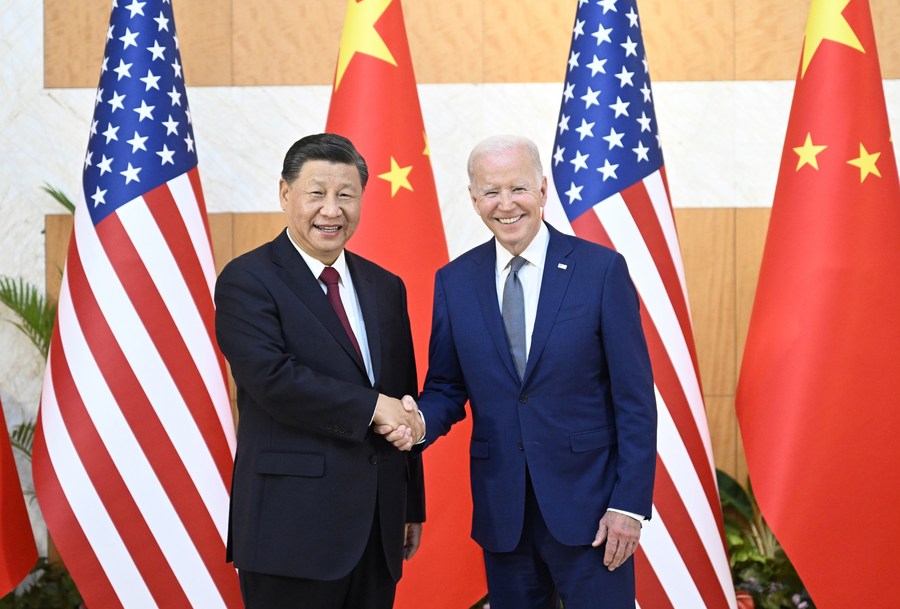 BALI, Indonesia, Nov. 14 (Xinhua) -- Chinese President Xi Jinping and his U.S. counterpart, Joe Biden, had a candid and in-depth exchange of views here on Monday on issues of strategic importance in China-U.S. relations and on major global and regional issues.

The current state of China-U.S. relations is not in the fundamental interests of the two countries and peoples, and is not what the international community expects, Xi said.

China and the United States need to have a sense of responsibility for history, for the world and for the people, explore the right way to get along with each other in the new era, put the relationship on the right course, and bring it back to the track of healthy and stable growth to the benefit of the two countries and the world as a whole, he added.

Expounding on the 20th National Congress of the Communist Party of China (CPC) and its key outcomes, Xi said that the domestic and foreign policies of the CPC and the Chinese government are open and transparent, with clearly stated and transparent strategic intentions and great continuity and stability.

China is advancing the rejuvenation of the Chinese nation on all fronts through a Chinese path to modernization, basing its efforts on the goal of meeting people's aspirations for a better life, unswervingly pursuing reform and opening-up, and promoting the building of an open global economy, Xi said.

China remains firm in pursuing an independent foreign policy of peace, always decides its position and attitude based on the merits of issues, and advocates resolving disputes peacefully through dialogue and consultation, Xi said.

Pointing out that the world is at a major inflection point in history, Xi said that countries need to both tackle unprecedented challenges and seize unprecedented opportunities, adding that this is the larger context in which the two sides should view and handle China-U.S. relations.

China-U.S. relations should not be a zero-sum game where one side out-competes or thrives at the expense of the other, Xi said. The successes of China and the United States are opportunities, not challenges, for each other. The world is big enough for the two countries to develop themselves and prosper together, he added.

The two sides should form a correct perception of each other's domestic and foreign policies and strategic intentions, Xi said, noting that China-U.S. interactions should be defined by dialogue and win-win cooperation, not confrontation and zero-sum competition.

China does not seek to change the existing international order or interfere in the internal affairs of the United States, and has no intention to challenge or displace the United States, Xi said, calling on the two sides to respect each other, coexist in peace, pursue win-win cooperation, and work together to ensure that China-U.S. relations move forward on the right course without losing direction or speed, still less having a collision.

Observing the basic norms of international relations and the three China-U.S. joint communiques is vitally important for the two sides to manage differences and disagreements and prevent confrontation and conflict, Xi said, noting that it is indeed the most important guardrail and safety net for China-U.S. relations. 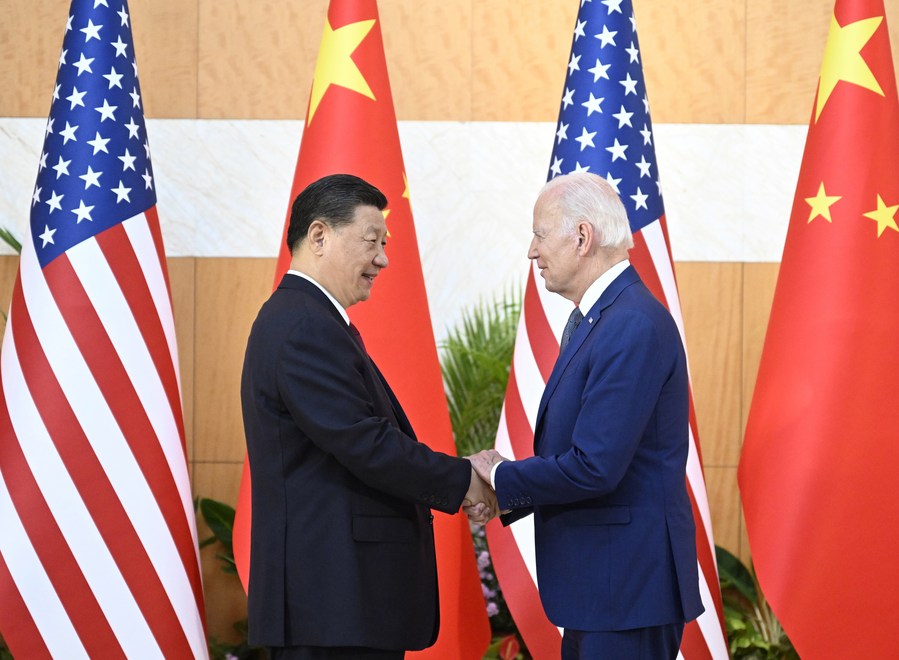 Resolving the Taiwan question is a matter for the Chinese and China's internal affair, Xi said, adding that it is the common aspiration of the Chinese people and nation to realize national reunification and safeguard territorial integrity.

Anyone that seeks to split Taiwan from China will be violating the fundamental interests of the Chinese nation, Xi said, adding that the Chinese people will absolutely not let that happen.

China hopes to see, and are all along committed to, peace and stability across the Taiwan Strait, but cross-Strait peace and stability and "Taiwan independence" are as irreconcilable as water and fire, Xi said, expressing hope that the U.S. side will match its words with action and abide by the one-China policy and the three joint communiques.

Noting that Biden has said on many occasions that the United States does not support "Taiwan independence" and has no intention to use Taiwan as a tool to seek advantages in competition with China or to contain China, Xi said that China hopes that the U.S. side will act on this assurance to real effect.

Xi noted that freedom, democracy and human rights are the common pursuit of humanity and also the unwavering pursuit of the CPC.

The whole-process people's democracy practiced in China is based on the country's reality, history and culture, and reflects people's will, he said, adding, "We take great pride in it."

No country has a perfect democratic system, and there is always a need for development and improvement, Xi said, adding that the specific differences between the two sides can be worked out through discussion, but only on the precondition of equality.

The so-called "democracy versus authoritarianism" narrative is not the defining feature of today's world, still less does it represent the trend of the times, Xi said.

The two countries take different paths with the United States practicing capitalism while China practicing socialism, Xi said, noting that such difference is nothing new and will continue to exist.

Leadership of the CPC and China's socialist system have the support of 1.4 billion people, and they are the fundamental guarantee for China's development and stability, Xi said. 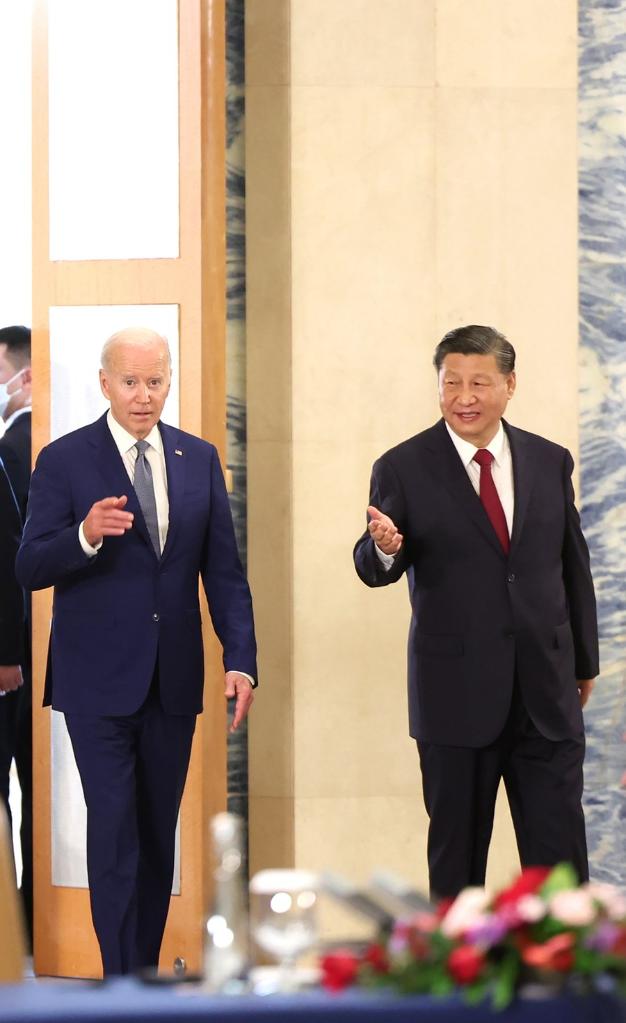 For China and the United States to get along, it is vital to recognize and respect such difference, he said. Neither side should try to remold the other in one's own image, or seek to change or even subvert the other's system, he added, stressing that instead of talking in one way and acting in another, the United States needs to honor its commitments with concrete action.

Underscoring that China and the United States are two major countries with different histories, cultures, social systems and development paths, Xi said that there have been and will continue to be differences between the two countries.

Such differences should not become an obstacle to growing China-U.S. relations. There is always competition in the world, but competition should be about learning from each other to become one's better self and make progress together, not about taking others down in a zero-sum game, he said.

The Chinese nation has the proud tradition of standing up for itself, Xi said, adding that suppression and containment will only strengthen the will and boost the morale of the Chinese people.

Starting a trade war or a technology war, building walls and barriers, and pushing for decoupling and severing supply chains run counter to the principles of market economy and undermine international trade rules, Xi said, adding that such attempts serve no one's interests.

The Chinese side opposes politicizing and weaponizing economic and trade ties as well as exchanges in science and technology, he added.

Under the current circumstances, China and the United States share more, not less, common interests, and it is in both sides' mutual and fundamental interest to prevent conflict and confrontation and achieve peaceful coexistence, he said, adding that the two economies are deeply integrated, and both face new tasks in development.

It is in both sides' mutual interest to benefit from each other's development, Xi said, adding that it is also in their interest to promote post-pandemic global recovery, tackle climate change and resolve regional issues through China-U.S. coordination and cooperation.

The two sides need to respect each other, pursue mutual benefit, focus on the larger picture, and nurture a sound atmosphere and stable relations for cooperation, Xi said.

For his part, Biden noted that he has known President Xi for many years and maintained regular communication, but nothing could substitute for the kind of face-to-face meeting today.

He congratulated President Xi on his election as general secretary of the CPC Central Committee, saying that as two major countries, the United States and China have a responsibility to keep a constructive relationship.

The U.S. side is committed to keeping the channels of communication open between the two presidents and at all levels of government, so as to allow candid conversations on issues where the two sides disagree, and to strengthen necessary cooperation and play a key role in addressing climate change, food security and other important global challenges, which is vitally important to the two countries and peoples, and also very important to the whole world, he said.

Noting that how the U.S.-China relationship develops is of crucial importance to the future of the world, he said the United States and China have a shared responsibility to show the world that they can manage their differences, and avoid and prevent misunderstandings and misperceptions or fierce competition from veering into confrontation or conflict.

The U.S. side shares the view that it is necessary to work out the principles guiding U.S.-China relations, Biden said, adding that the two teams may continue discussions on the basis of the common understandings already in place, and strive for early agreement.

The U.S. government is committed to the one-China policy. It does not seek to use the Taiwan question as a tool to contain China, and hopes to see peace and stability across the Taiwan Strait, he added. 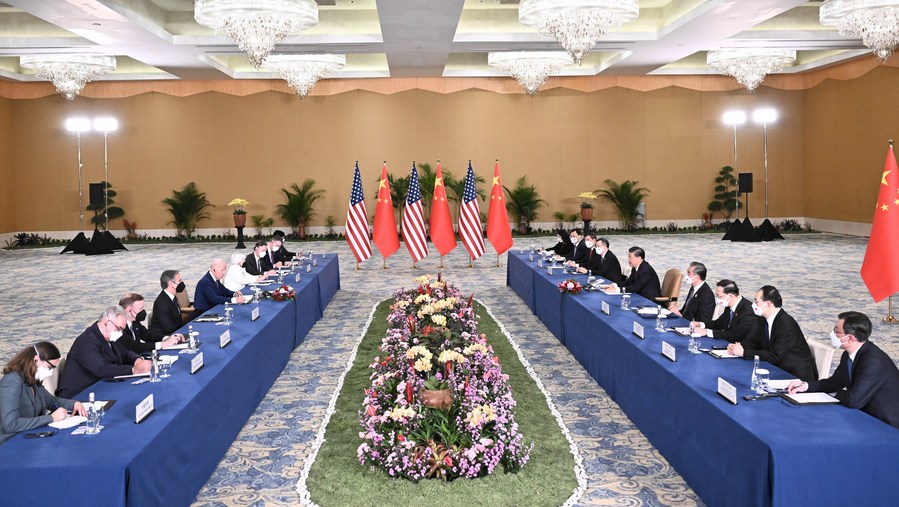 The two presidents agreed that their respective diplomatic teams should maintain strategic communication and conduct regular consultations; their financial teams will continue dialogue and coordination on macroeconomic policies, economic ties and trade; and the two countries will jointly work for the success of the 27th Conference of the Parties to the United Nations Framework Convention on Climate Change.

They also reached common understandings on conducting dialogue and cooperation in public health, agriculture and food security, and agreed to make good use of the China-U.S. joint working group to promote the resolution of more issues. They also agreed that people-to-people exchange is very important, and pledged to encourage the expansion of such exchange in all sectors.

The two presidents also exchanged views on the Ukraine crisis. Xi pointed out that China is highly concerned about the current situation in Ukraine. He noted the four points about what must be done he had proposed soon after the outbreak of the crisis and the four things the international community must do together he had suggested recently.

Xi said facing a global, composite crisis like the one in Ukraine, it is important to give serious thought to three points. First, conflicts and wars produce no winner; second, there is no simple solution to a complex issue; and third, confrontation between major countries must be avoided.

Xi said China has all along stood on the side of peace and will continue to encourage peace talks. China supports and looks forward to a resumption of peace talks between Russia and Ukraine, and hopes that the United States, NATO and the European Union will conduct comprehensive dialogues with Russia.

Both presidents viewed their meeting as in-depth, candid and constructive. They instructed their teams to promptly follow up and implement the important common understandings reached between them, and take concrete actions to put China-U.S. relations back on the track of steady development. 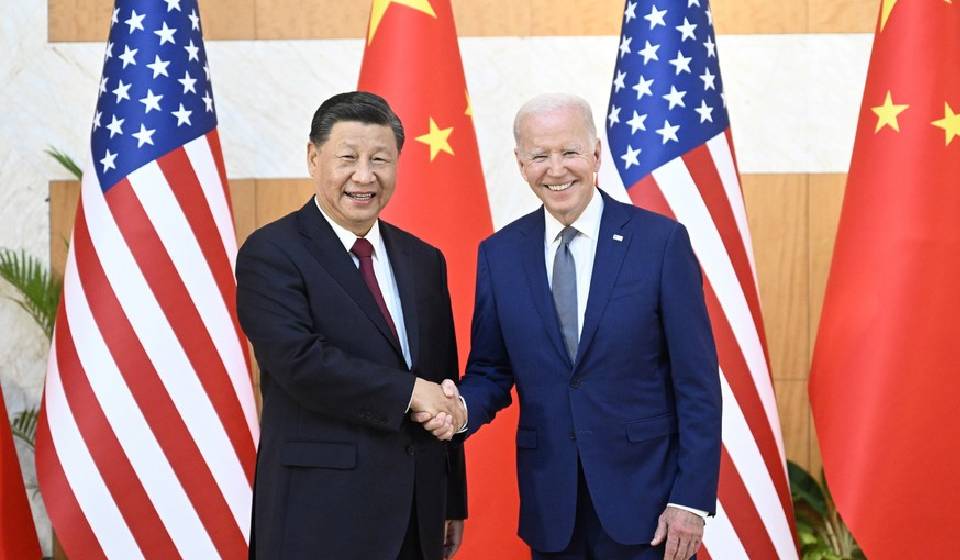