Feature: Where does Tunisia's milk go? 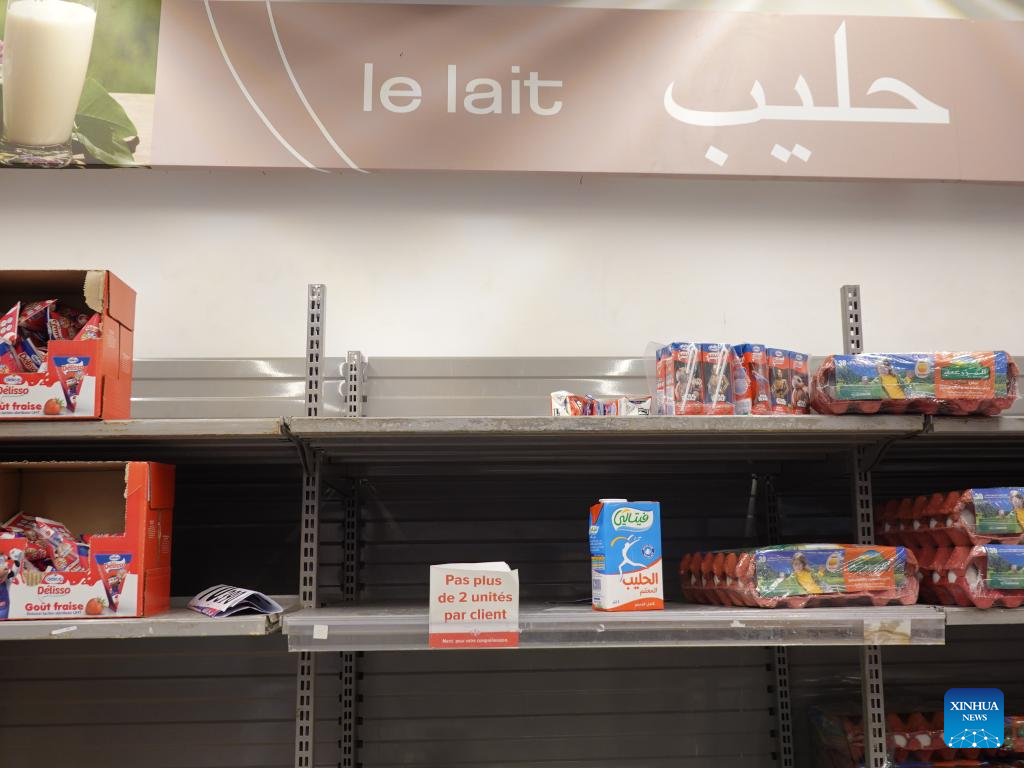 Photo taken on Nov. 15, 2022 shows a shelf with a label of purchase restriction on milk at a supermarket in Tunis, Tunisia. The first item on the shopping list for Tunisians must be milk, but to their disappointment, the store shelves used to be full of bottles of milk are now always empty. Tunisia is experiencing a severe shortage of dairy products. Officials warned that if the situation continues, the country's strategic milk reserve could be dried up within dozens of days. (Xinhua/Xu Supei)

TUNIS, Nov. 15 (Xinhua) -- The first item on the shopping list for Tunisians must be milk, but to their disappointment, the store shelves used to be full of bottles of milk are now always empty.

Tunisia is experiencing a severe shortage of dairy products. Officials warned that if the situation continues, the country's strategic milk reserve could be dried up within dozens of days.

"The ongoing milk shortage dated back to the second half of last year," recalled Mohammed Sannen, a 56-year-old man who owns a large food store in the Ariana province in northern Tunisia.

"Before the crisis, I received 100 packets of milk each week, with one packet containing six bottles. But now I receive between 40 and 50 packets," Sannen told Xinhua.

In early November, the Tunisian Union of Agriculture and Fisheries (UTAP) held a meeting with the milk shortage on the top of agenda.

Midani Dhaoui, president of the National Union of Farmers of Tunisia, affirmed that the national strategic milk reserve has decreased from 50 million liters to 13 million liters.

He added that 500,000 liters of the milk reserve are still being poured into the market per day.

The available milk stock will not exceed the month of consumption at best, Faouzi Zayani, a member of the UTAP, said in a statement sent to the private radio station Mosaique FM.

"Tunisians must review their consumption habits. From the age of 18, you do not need to drink milk anymore," he added.

Analysts said that Tunisian dairy farmers are getting harder to make ends meet under the surging fodder prices and the unchanged state-controlled milk price. Many farmers chose to sell the livestock or send them to the slaughterhouse.

"Fodder prices have increased to reach 1.4 million Tunisian dinars (435,600 U.S. dollars) per ton, while the milk price has not changed since 2021," said Dhaoui.

Meanwhile, quite a few Tunisian dairy farmers are selling their cows to neighboring Algeria. The Algerian news website TSA reported that Tunisia's livestock is being increasingly smuggled to Algeria.

"In Algeria, a cow can sell for 15 times more expensive than on in Tunisia. Smugglers rush to buy them at a low price and then smuggle them out of Tunisia," the TSA added.

Besides, panic buying and hoarding among consumers and shopkeepers also aggravate the shortage.

On Nov. 9, the UTAP urged the government to announce an immediate increase in the producer's price of milk, and the increase should not be less than 0.6 dinar per liter.

Apart from milk, Tunisia is witnessing a significant drop in the market supply of a number of essential commodities, such as cooking oil, egg, sugar, and bottled water.

In addition to shortages of some food products, the country also witnessed a fuel shortage over the first half of October. Long queues were seen at gas stations across the capital Tunis, with many people even lining up at night for refilling of fuel.

In October, Tunisia's inflation rose for 13 consecutive months to 9.2 percent, the highest in three decades. Experts warned that under the current situation, any increase would threaten livelihood of low-income households.

How about increasing the government's subsidies to compensate for the loss of cow breeders?

On Oct. 15, the International Monetary Fund (IMF) announced that it had reached a staff-level agreement with Tunisia on providing a loan of 1.9 billion U.S. dollars. Under the loan, the IMF supports Tunisia's economic reform program, including cutting subsidies and reducing the public wage bill.

The final agreement is subject to the approval of the IMF's Executive Board, which is scheduled to discuss Tunisia's request in December.

Aymen Bessalah, a nonresident fellow at the Tahrir Institute for Middle East Policy, said that even with the IMF deal, economic recovery in Tunisia will still require deep and inclusive reforms to boost the economy without sacrificing vulnerable households.