* The first China-Arab States Summit is a strategic choice for China and Arab countries under the current situation. Leaders of the two sides will chart the course for future cooperation, upgrade bilateral ties, and further consolidate their consensus on major issues such as global governance, development and security, and dialogue among civilizations.

* With Chinese President Xi Jinping's promotion and the joint efforts from both sides, China and Arab countries have grasped the trend of history and made continuous progress in building a China-Arab community with a shared future.

It is widely believed that Xi's trip will give a further boost to China's cooperation with the Arab world, promote peace and prosperity in the region, and chart a path to jointly building a China-Arab community with a shared future for the new era.

The world is once again at a critical juncture. A slew of pressing global challenges such as a sluggish global economy, rising bloc politics, widening wealth gaps, as well as escalating food and security crises are testing humanity's resolve and wisdom.

Against this backdrop, China and Arab countries, more than ever, need to join forces to strengthen cooperation and overcome various international challenges.

China is willing to work with Arab countries to enhance mutual support and expand cooperation in a joint effort to build a China-Arab community with a shared future for the new era, so as to create a bright future for China-Arab relations and make contributions to world peace and development, Xi said in a congratulatory message to the 31st Arab League (AL) Summit on Nov. 1.

The first China-Arab States Summit is a strategic choice for China and Arab countries under the current situation. Leaders of the two sides will chart the course for future cooperation, upgrade bilateral ties, and further consolidate their consensus on major issues such as global governance, development and security, and dialogue among civilizations.

Taking the China-GCC summit as an opportunity, the two sides are expected to continue their friendly tradition, draw up a blueprint for future cooperation and promote common development. 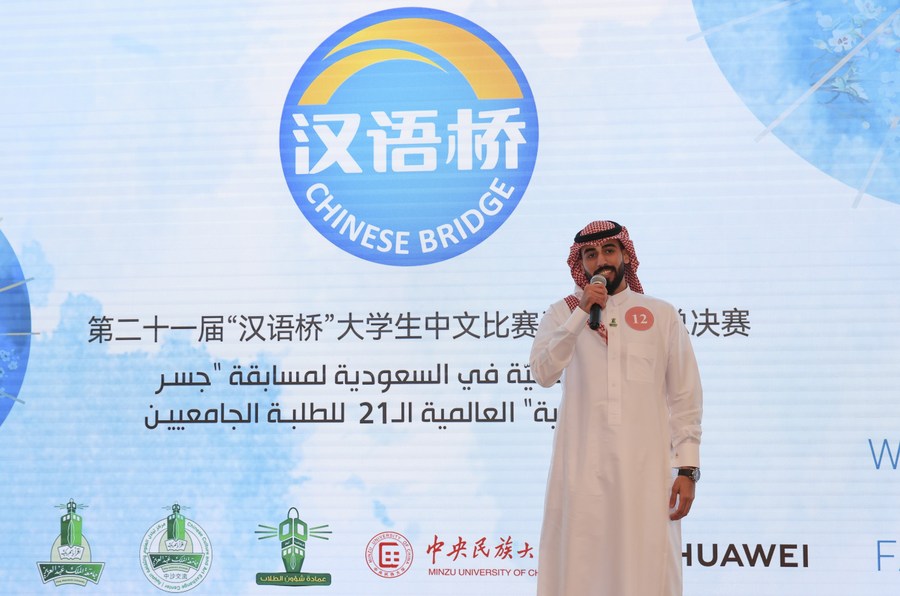 In the past few years, China-Arab relations in the new era have shown great vitality and seen constant progress, which has also bolstered the building of a China-Arab community with a shared future.

Two years later, Xi visited the AL headquarters, elaborating on China's Middle East policy in the new era in a comprehensive and systematic way and mapping out the blueprint for the future development of China-Arab relations, which vigorously improved the overall cooperation between China and Arab countries.

In 2018, Xi announced that China and the Arab countries agreed to establish a "Sino-Arab future-oriented strategic partnership of comprehensive cooperation and common development" at the 8th ministerial meeting of the China-Arab States Cooperation Forum. That outlined a path for building a China-Arab community with a shared future.

In July 2020, China and Arab states reached positive consensus on including "jointly building a China-Arab community with a shared future in the new era" in the Amman Declaration, which was adopted during the 9th ministerial meeting of the China-Arab States Cooperation Forum.

With Xi's promotion and the joint efforts from both sides, China and Arab countries have grasped the trend of history and made continuous progress in building a China-Arab community with a shared future.

At present, China and Arab countries enjoy close high-level exchanges, enhanced political mutual trust, fruitful economic and trade cooperation, strong solidarity against COVID-19 and closer cultural and people-to-people exchanges. They have strengthened coordination in international and regional affairs, setting a benchmark for solidarity and cooperation among developing countries and a model for South-South cooperation.

The first China-Arab States Summit will open up broader prospects for the China-Arab strategic partnership, and lead China and Arab countries to make great strides in building a China-Arab community with shared future.

Noting that relations between the Gulf countries and China are getting increasingly closer, Mohanad Al-Azzawi, director of Saqr Center for Strategic Studies in the United Arab Emirates (UAE), said he hopes Xi's visit and the China-GCC summit will comprehensively deepen their relations, adding that increasing cooperation and exchanges between the two sides have built a "safety valve" for the region's economic and political stability.

Former Egyptian Prime Minister Sherif Ismail said that Arab countries and China are both representatives of the world's ancient and great civilizations, which have long been linked by the ancient Silk Road.

To date, the two sides have maintained close exchanges, and the first China-Arab States Summit will be a milestone in the strategic partnership between Arab countries and China, he noted.

In Qatar's capital Doha, the gleaming Lusail Stadium looks like a "golden bowl" in the desert. The 80,000-seat main venue for the FIFA World Cup, designed and constructed by Chinese companies, has not only become a witness to the grand international football event, but also a new landmark in Qatar, and is printed on the country's 10-riyal banknote.

With great vitality, the Belt and Road cooperation between China and Arab countries continuously adds momentum to the development of the Middle East. 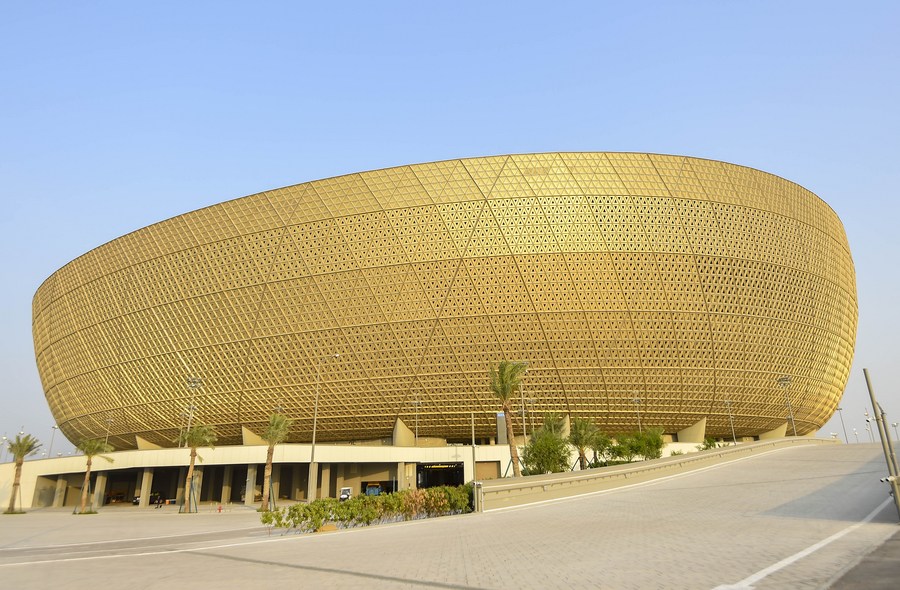 This photo taken on Aug. 11, 2022 shows the exterior view of Lusail Stadium, the main venue for the 2022 FIFA World Cup in Doha, Qatar. (Photo by Nikku/Xinhua)

Located at the junction of Asia, Africa and Europe, Arab countries are widely known for their unique geographical locations, rich energy reserves and splendid civilizations. However, challenges to peace and development still persist as a result of drawn-out wars, conflicts and other factors.

In the face of such problems, China's Middle East policy has always been in line with the strong desire of the people in the region for peace and development.

China does not seek self-serving interests in the Middle East, does not engage in geopolitical contests, and does not create spheres of influence. Instead, it upholds a spirit of equal and friendly partnership and respects the independent choices of countries in the region, injecting positive energy into the peaceful development of the Middle East through sincere cooperation.

In this regard, Xi has proposed building a common, comprehensive, cooperative and sustainable security architecture in the Middle East, providing important inspiration for solving the security dilemma in the region.

China's proposal to promote the Belt and Road cooperation with Arab countries has received broad support, as it meets the Arab countries' needs for better development.

Over the past eight years, remarkable progress has been made through practical cooperation between the two sides, benefiting people's livelihood and promoting regional development and prosperity.

So far, China has signed Belt and Road cooperation documents with 20 Arab countries and the AL. The two sides have implemented more than 200 large-scale cooperation projects in various fields including energy and infrastructure. Such cooperation has benefited nearly 2 billion people.

Take the China-Arab States BDS/GNSS Center, the first overseas center for China's indigenous BeiDou Navigation Satellite System (BDS) as an example. The center, which was officially inaugurated in Tunisia in April 2018, can provide solutions for Arab countries in the fields of agriculture, transportation, disaster reduction and public safety.

Other projects like the China-Egypt TEDA Suez Economic and Trade Cooperation Zone and the Attarat oil shale power plant project in Jordan, can also reflect the fruitful Belt and Road cooperation between China and Arab countries.

Ali Obaid Al Dhaheri, ambassador of the UAE to China, said the Belt and Road cooperation, dedicated to common prosperity and mutual understanding, has made remarkable achievements. The ambassador added that cooperation between China and Arab countries is entering a new "golden age." 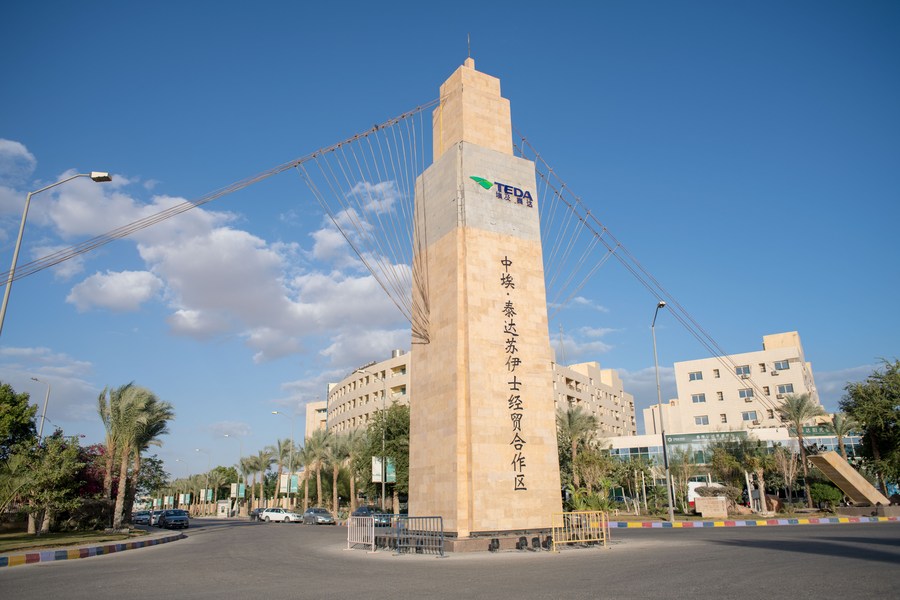 This photo taken on Jan. 14, 2021 shows a view of the entrance of China-Egypt TEDA Suez Economic and Trade Cooperation Zone in Ain Sokhna, Egypt. (Xinhua/Wu Huiwo)

BUILDING A BETTER FUTURE TOGETHER

During his state visit to Saudi Arabia in January 2016, Xi pointed out that China and Saudi Arabia are major countries with profound historical and cultural accumulations and now bear the task of promoting economic development and improving people's livelihood. China will, together with Saudi Arabia, learn from each other and realize common development and prosperity.

Under the guidance of two heads of state, political mutual trust between the two countries has been strengthened and their cooperation in various fields has yielded rich fruits. Both sides agreed to make China-Saudi Arabia relations a priority in their foreign policies and support each other on issues concerning their respective core interests. 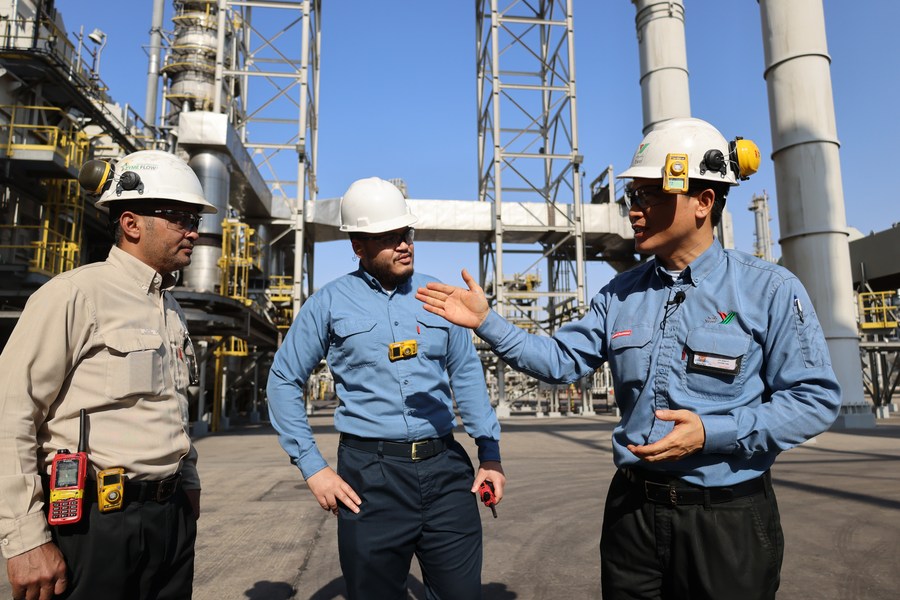 With the BRI's deep synergy with Saudi Arabia's Vision 2030, bilateral cooperation in the fields of energy, science and technology and infrastructure has been continuously deepened, and their cultural and people-to-people exchanges have become increasingly close.

Abdulaziz Alshaabani, an expert on China from Saudi Arabia, said he hopes that through Xi's state visit, Saudi Arabia and China will make bilateral ties a model for the development of bilateral relations in the international community.

The China-Saudi Arabia partnership is the epitome of China-Arab friendly cooperation. Together, China and Arab countries have practiced true multilateralism, continuously expanded practical cooperation, strengthened coordination in international and regional affairs, and demonstrated their responsibilities, further enriching and invigorating the China-Arab strategic partnership.

For its part, China has always been committed to its foreign policy goals of upholding world peace and promoting common development, and it is dedicated to promoting a human community with a shared future. 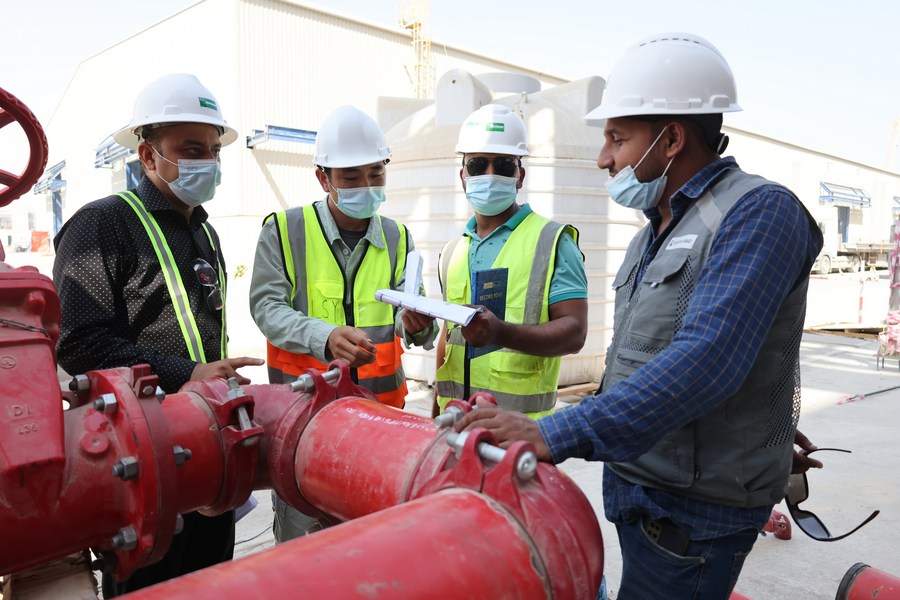 No matter how the international situation changes, China will, as it has done, view its relations with Arab countries from a strategic and long-term perspective, and take them as important partners in pursuing peaceful development, strengthening unity and cooperation among developing countries and building a human community with a shared future.