SHIJIAZHUANG, Dec. 6 (Xinhua) -- Niu Tong is still proud of his decision three years ago when he started his peach planting business in Fuping County in north China's Hebei Province after graduating from a university in Australia.

Niu, 28, is a Beijinger. He now works as the general manager of Hebei Guangcun Biotechnology Limited Company.

Fuping County is in the deep areas of the Taihang Mountains. The mountain farm area of the county is 3.26 million mu (217,333 hectares), accounting for 87 percent of the total area, while the per capita cultivated land area is only 0.96 mu. It was once a poverty-stricken county.

In 2018, Niu's father contracted more than 5,000 mu of mountainous fields in Fuping. He took Niu there and told him these fields used to be barren.

In 2019, Niu graduated with a master's degree in Australia and decided to participate in poverty relief work in Fuping to help his father.

Niu Tong was determined to establish intelligent agricultural production management systems taking advantage of his knowledge of computers, big data, and the Internet of Things.

He used cloud-platform technology to connect multi-terminal sensing equipment and monitoring equipment to realize the uploading and collecting of the agricultural production data. The meteorological sensors can show the temperature, humidity, wind power, and soil indicators in orchards in real-time. The integrated irrigation technology enables the watering and fertilizing to be completed through mobile phone operation.

"The HD monitoring system in the park, which can magnify things 20 times, allows me to sit in my office to see every tree in the park," Niu said.

"In the past, relying on labor, the amount of water, and fertilizer for the orchards were inevitably inaccurate. Nowadays, thanks to the smart agriculture system, many numerical values are accurately controlled by digital technology, which improves the quality of our yellow peach," Niu said.

To build the Internet of Things system, he invited his three classmates in Australia to join him. Niu told his companions that farming is hard and they must endure loneliness to succeed.

Then, the four young overseas returnees started their business in the mountainous village.

In addition to building a modern orchard, Niu also led his team to combine traditional fruit sales with the internet and new retail outlets to find a way out for fruit sales in mountainous areas. In Niu's view, using modern agriculture to reduce production costs is only the first step, and selling fruits well is a more significant step.

In the past, farmers did not know about e-commerce. Niu established sales teams in Fuping and Beijing and registered trademarks, created brands, established online stores, opened offline channels, and opened stores to sell Fuping fruit to all parts of the country.

The yellow peaches from Niu's orchards sold well in Hema Fresh, a fresh produce supermarket in Beijing. Nearly 50,000 kg of the peaches sold out in one month.

Niu's orchards have also helped more than 500 households in Fuping, with an average annual income increase of more than 25,000 yuan (3,584.4 U.S. dollars) for each.

Niu said his happiest moment is educating people about Fuping County and the fruits in mountainous areas through his efforts, hoping that more aspiring young people can become "new farmers" and contribute their strength to rural revitalization. 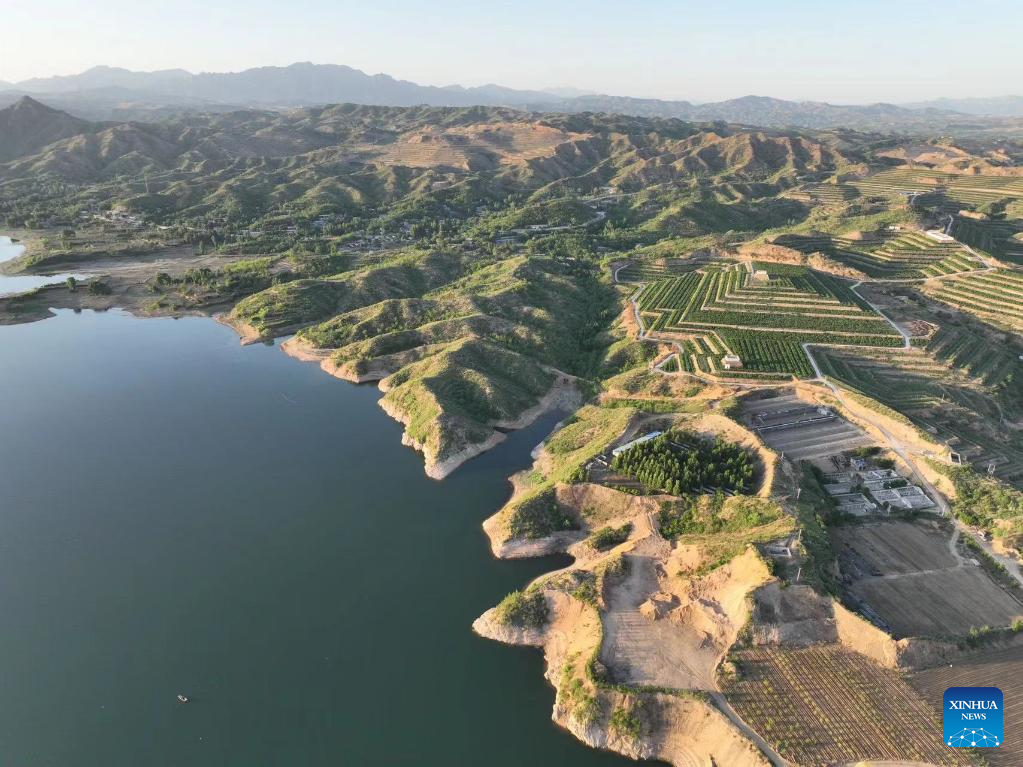 Niu Tong (R) and his partner Wu Zenian check the growth of fruit trees through high-definition monitoring in the orchards in Fuping County, north China's Hebei Province, on Aug. 2, 2022. (Xinhua)