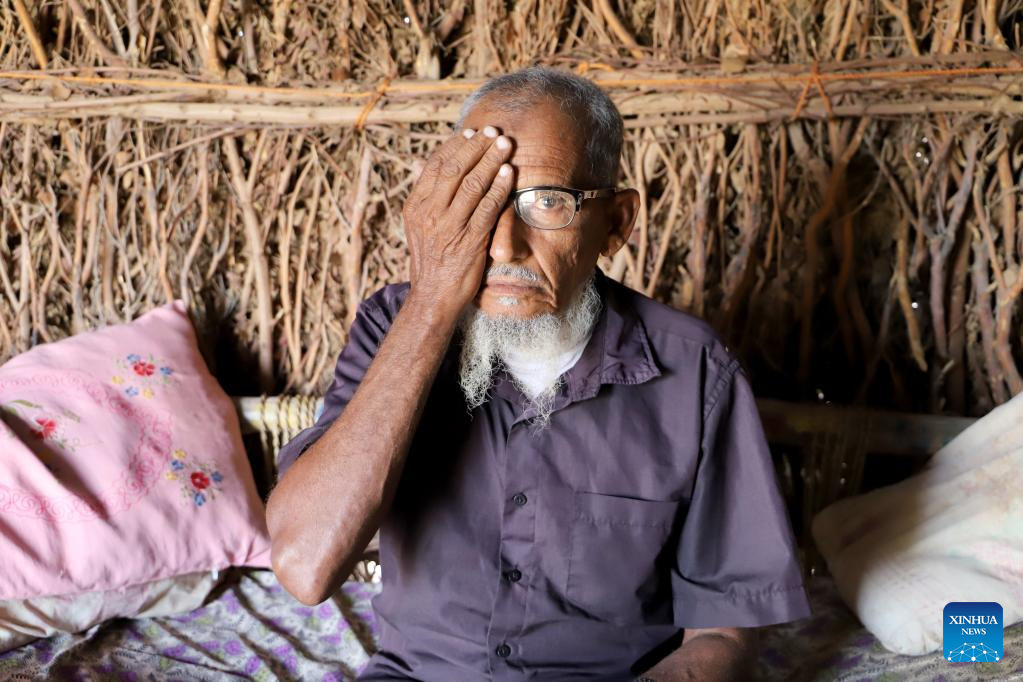 HAJJAH, Yemen, Jan. 10 (Xinhua) -- For Islam Fouad, an eye doctor at a public hospital in northern Yemen, the most difficult part of his job is to tell his patients that they have to find treatment elsewhere while knowing most of them will never be able to afford it.

At the Al-Jadah Health Center in Midi District, Hajjah Province, eye patients from over 20 nearby villages come over for help but only a few could receive treatment.

"While the number of eye patients is increasing day by day, the center lacks the equipment and specialist physicians to treat eye diseases because of the blockade imposed upon us," the doctor told Xinhua after just advising a mother to take her four-year-old boy to other cities for treatment.

The mother, Aisha Ali Hadari, said her child, Abdullah, lost his eyesight two weeks after his head was hit by a small stone while playing with his brothers.

"The doctor told me to take him to specialized hospitals for diagnosis and treatment in other cities or provinces due to the lack of medical equipment here," Hadari told Xinhua.

"The roads have been cut, and we cannot go to other provinces. And even if we can, I don't know if we can afford such a trip," the mother said, adding she was afraid that the delay of treatment may cause Abdullah to lose eyesight permanently.

The health center is one of the few public clinics that are still operating in the northern coastal district as most of the health facilities here were destroyed during the battles between the Houthi group and the government forces.

After the governmental forces recaptured the district in 2018, the Houthi forces imposed a siege on the district, cutting off the roads that lead to other provinces and cities.

"According to the center's records, there were over 860 eye patients registered but did not receive treatment in 2022, most of whom were children and the elderly, including approximately 700 cases of cataracts, 100 cases of pterygium, and nearly 20 cases of glaucoma and other eye disease cases," the doctor said.

The public hospitals are severely ill-funded across the war-ravaged country, and most Yemenis who live in abject poverty can never afford the medical bills at private clinics, he added.

The civil war in Yemen erupted in late 2014 when the Iran-backed Houthi militia stormed several northern provinces and forced the Saudi-backed Yemeni government out of the capital Sanaa.

The war has killed tens of thousands of people, displaced 4 million, and pushed the country to the brink of starvation.

Mahdi Ati, 72, who suffers from pterygium, has chosen to stay at home because he has no money to travel for treatment.

"The clinics in Saudi Arabia would charge me 8,000 Saudi riyals (about 2,133 U.S. dollars) for curing my eyes. I couldn't even afford my clothes, where can I get so much money?" the old man said.