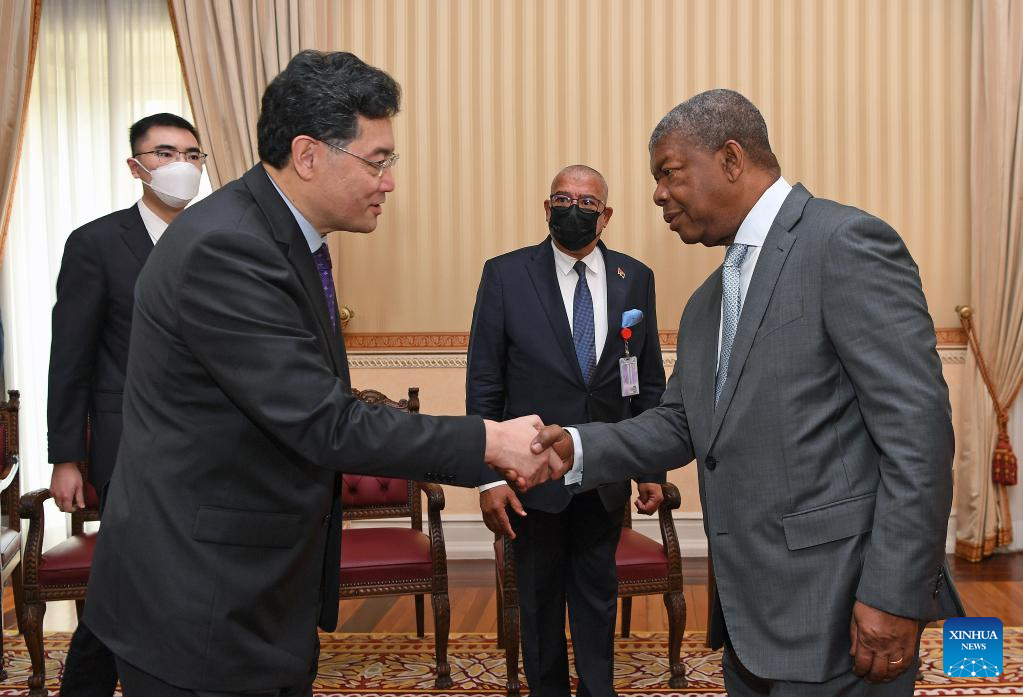 Lourenco asked Qin to convey his best wishes to Chinese President Xi Jinping and thanked Xi for his personal commitment to and support for developing Angola-China relations.

Angola and China have always been united and trusted each other, with sound momentum in bilateral cooperation, he said.

The Angolan president said that the airports, hydropower stations, roads, ports, and many other landmark projects built with China's support have progressed smoothly in the country and played an indispensable role in Angola's post-war reconstruction and socio-economic development.

He said Angola and China have similar visions for development and that Angola firmly adheres to the one-China policy and will continue to work with China to uphold the principle of non-interference in other countries' internal affairs and safeguard international fairness and justice.

For his part, Qin Gang conveyed President Xi Jinping's cordial greetings to Lourenco, saying that since the establishment of diplomatic relations between the two countries 40 years ago, China and Angola have always maintained sincere friendship and forged ahead together.

Thanks to the commitment and strategic guidance of the two countries' heads of state, the political mutual trust and traditional friendship between China and Angola have been deepening steadily, and their practical cooperation has yielded fruitful results, Qin said, noting that on Thursday, the two heads of state exchanged congratulatory messages on the 40th anniversary of the establishment of diplomatic ties, charting the course for further developing bilateral relations.

The Chinese foreign minister said that China appreciates Angola's adherence to the one-China policy and its support for China's just proposals, adding that China will as always support Angola in opposing external interference, independently choosing its own development, and safeguarding its sovereignty, security and development interests.

China stands ready to jointly implement the important consensus reached by the two heads of state, upgrade and elevate practical cooperation so as to bring more benefits to the people of both countries, Qin said.

He said that China appreciates Angola's active mediation efforts in dealing with regional hot issues, and supports a bigger role for Luanda in international and regional affairs.

China will strengthen its coordination with Angola on multilateral affairs, jointly defend genuine multilateralism, safeguard the legitimate rights and interests of developing countries, and work together to build a community with a shared future for mankind.