Employees of a grain company dry corn at a facility in Heihe, Heilongjiang province. [Photo/Xinhua]

The Chinese Academy of Agricultural Sciences signed agreements with 19 global partners to share their germplasm knowledge last year as part of a broader effort to bolster international collaboration in agricultural science and technology, CAAS President Wu Kongming said on Monday.

Wu said at the academy's annual work conference in Beijing that it had reached deals with the partners to advance exchanges in the field of G2P, or genome to phenome studies, which helps researchers predict and improve traits of important food strains.

A total of 121 international cooperation projects were finalized last year on that front, a 50 percent increase year-on-year, and 16 of them were listed among the country's key intergovernmental research and development programs, he said.

The increase in the sharing of the genetics of food species is part of a national effort to seek breakthroughs in germplasm to improve China's food security. Germplasm are genetic resources such as plant seeds or animal tissue that can be used to aid in the breeding of crops or livestock.

"CAAS has worked to ramp up scientific and technological cooperation more openly and actively over the past year," Wu said.

Last year also saw the creation of the CAAS-Food and Agriculture Organization Innovation Platform, which Wu said was one of the major moves made by the Chinese government to implement the Global Development Initiative proposed in 2021.

The Global Agricultural Science and Technology Innovation Alliance championed by the academy, which is still undergoing a deliberation process by the China Association for Science and Technology, has received applications from 34 domestic and 21 foreign institutions looking to participate, Wu said.

Last year, CAAS also laid the groundwork for establishing the China-Africa Agricultural Science and Technology Innovation Alliance and advanced the construction of joint laboratories in Kazakhstan, Romania and Uruguay, all participants in the Belt and Road Initiative.

China has in recent years promoted the sharing of agricultural technologies to bolster world food security.

He added that some of China's quality species, such as hybrid rice, should be introduced to other countries to strengthen the world's food security.

As many as 116 CAAS researchers hold positions in international organizations or agencies, and 358 researchers serve as editors at influential global academic journals.

CAAS has championed China's drive to bolster breakthroughs in agricultural science and technology as the nation grapples with limited arable land and water resources and an aging farming population.

Data provided by CAAS showed that the number of academic papers written by its researchers jumped 30 percent over the last decade, while patents increased 92 percent over that period.

Wu said the contribution rate of science and technology to agricultural production grew from 54.5 percent in 2012 to 61.5 in 2021, and the mechanization rate in crop planting and harvesting rose from 57 percent to 72 over the same period.

"The overall strength of Chinese agricultural science and technology has reached a world-class level, and the number of highly cited agricultural papers and patent applications by China is the highest in the world," he said.

At the annual central rural work conference in December, central authorities called for efforts to vigorously accelerate and promote the modernization of agriculture and rural areas. 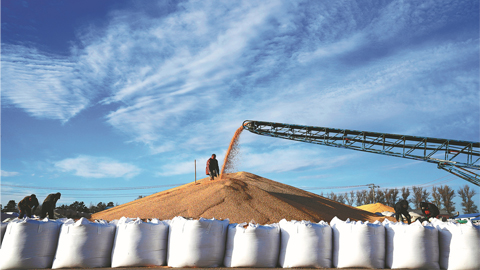