Xi will pay state visits to Russia and Germany from July 3 to 6, and attend the 12th G20 summit in Hamburg on July 7 and 8. Xi and Russian President Vladimir Putinwill hold talks, and meet with the press. The two leaders will map out the direction and goals for the development of bilateral ties, further deepen political mutual trust, and promote cooperation, Assistant Minister of Foreign Affairs Li Huilai said at a press conference.more>>
Follow Guangming Online for exclusive content and more: As one of two major platforms in the world, the Belt and Road Initiative proposed by China is expected to facilitate G20 summit in propelling the world economic development.

Commentary: Multilateralism and free trade should be safeguarded at G20 summit

Amid rising anti-globalization and protectionist sentiments, leaders attending the 12th G20 summit here should seize the chance to safeguard multilateralism and free trade while tackling global economic imbalances in an efficient and fair way. 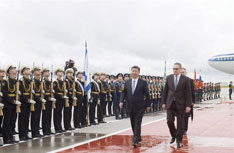