China Focus: What to expect at "two sessions" as China begins new journey

China's top legislature and political advisory body will start annual sessions this week, returning to their traditional March schedule after last year's events were postponed to May due to the COVID-19 epidemic. As the year 2021 marks the start of the 14th Five-Year Plan period (2021-2025), the world will watch how China, with the elimination of absolute poverty just declared, charts its course toward fully building a modern socialist country.more>>
Follow Guangming Online for exclusive content and more: 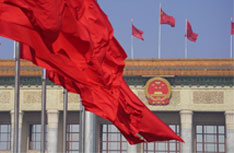 Why the world keeps close eye on China's "two sessions"

China's latest medium and long-term economic and social development plan, approved at the country's top legislature on Thursday, unfurls a roadmap of China's development for the next five years and beyond.

China's top legislative body on Thursday approved a development blueprint for the next five to 15 years to guide the country's march toward modernization, a dream pursued by many generations of Chinese.