My name is Nicholas Rosellini, and I am United Nations resident coordinator. And the United Nations Development Program resident representative in the People's Republic of China. If you look at the 40 years experience in terms of the reform and opening up. I mean one number that always stands out is the fact that during this time of successful economic and social development. China has successfully lifted 800 million people out of poverty and I think that's really outstanding. I don't think it's something with any sort of precedent in history. I think what is also important is it's not just about the economic gains during the 40 years. It is also about the social gains and human development gains. I think we have also seen the human development index go up very significantly during the same 40 years. China is a high human development country. So what impresses me is both the economic gains during the period but also the gains in terms of educational attainment, health attainment and human development overall cina is playing an active role on the world stage, and it is contributing in terms of global governance within the United Nations. In addition, it's also contributing its own forms of engagements.  For example the “Belt and Road” initiative，which brings countries together along the old trade routes and it s intended to encourage investments and trade in many countries around the world. First time I came to Beijing was in 2001. Beijing, as capital of China, is the first major city in China transforming to a low-carbon city. When Beijing competed for the Olympic Games, the concept of "Green Olympics" was put forward. I know that In the 1980s, as a very popular means of local transport, ceaseless streams of bicycles used to be an everyday sight in the streets of Beijing. However, the number of cars increased drastically in 90s and into the early 2000s, most of the main streets in Beijing were given away to vehicles. And bike ways were narrowed down. I hear that Beijing citizens have responded positively to "one more day with blue sky in Beijing, one less day driving each month", choosing environment-friendly public transport. We all need to stand together as a global community to tackle this problem. So what we need are not the industrial solutions in the past letting off environmental pollution,but forward-looking strategies for industrialization which will minimize the usage of carbon and minimize emissions. So we need low-carbon development pathways. I believe Beijing will become a low-carbon, ecological and livable city in the near future. 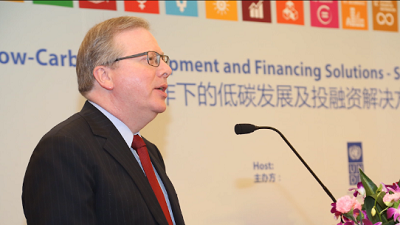