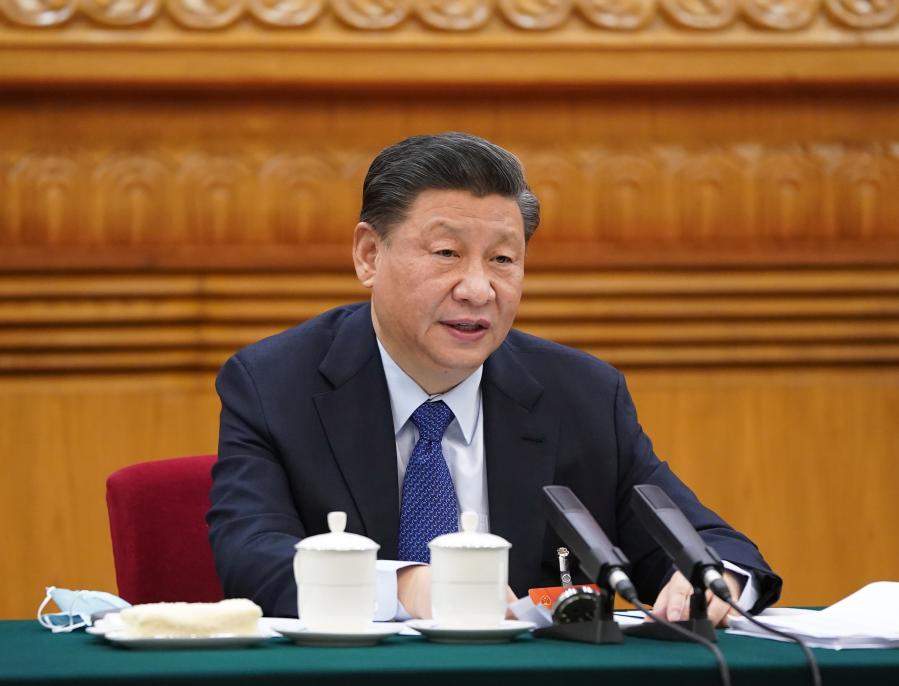 Chinese President Xi Jinping, also general secretary of the Communist Party of China Central Committee and chairman of the Central Military Commission, takes part in a deliberation with lawmakers from Qinghai Province, at the fourth session of the 13th National People's Congress in Beijing, capital of China, March 7, 2021. (Xinhua/Li Xueren)

BEIJING, March 7 (Xinhua) -- President Xi Jinping on Sunday stressed efforts to unswervingly pursue high-quality development and improve the people's well-being when joining a deliberation during the annual session of the National People's Congress, the top legislature.

Joining discussions with fellow lawmakers from northwest China's Qinghai Province, Xi, also general secretary of the Communist Party of China (CPC) Central Committee and chairman of the Central Military Commission, noted that high-quality development is the general requirement for all aspects of economic and social development.

He urged efforts to integrate high-quality development with action in meeting people's aspiration for a better life.

Xi expressed his full acknowledgment of Qinghai's work over the past year and its development during the 13th Five-Year Plan (2016-2020) period, urging the province to fully and faithfully implement the new development philosophy, stick to the people-centered approach and continue to deepen reform and opening up.

Efforts should also be made to strive for new achievements in the protection of the Qinghai-Tibet Plateau ecology and sustainable development, Xi said.

Based on its advantages and resources, Qinghai should implement the innovation-driven development strategy and accelerate the building of a world-class industrial base on salt lake, he said.

The province should also work to build itself into a highland of clean energies, a destination of international eco-tourism and a source of green and organic farm and livestock products, said Xi, stressing efforts on fostering a green, low-carbon and circular economic system.

Qinghai should strike a balance between developing tourism industry and protecting the environment in a bid to make lucid waters and lush mountains always the advantage and pride of Qinghai, Xi said.

He stressed efforts to strengthen areas of weakness in people's well-being, unfailingly meet the basic living needs of the people and improve the availability and equality of basic public services.

Stressing full implementation of the Party's ethnic and religious policies, Xi called for efforts to promote common prosperity and unity among people of all ethnic groups.

Highlighting a Party-wide campaign on CPC history learning and education, Xi said an important task of the campaign is to reinforce all Party members' ideals and convictions and to ensure that they remain true to their original aspiration and mission.

The campaign should help guide the people to unswervingly follow the Party's lead in fully building a modern socialist country, he said.