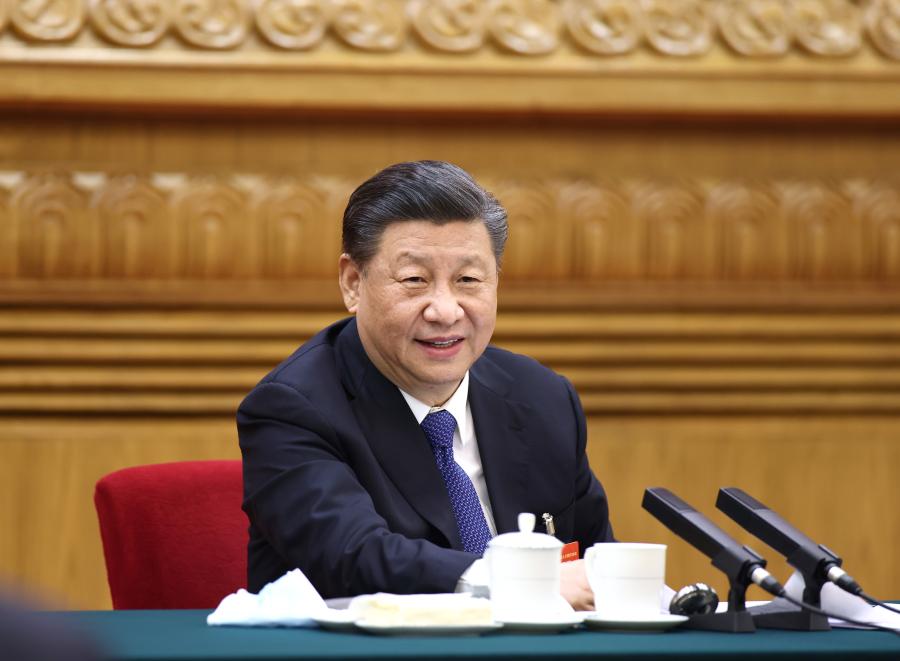 Chinese President Xi Jinping, also general secretary of the Communist Party of China Central Committee and chairman of the Central Military Commission, takes part in a deliberation with his fellow deputies from the delegation of Inner Mongolia Autonomous Region, at the fourth session of the 13th National People's Congress (NPC) in Beijing, capital of China, March 5, 2021. (Xinhua/Ju Peng)

BEIJING, March 5 (Xinhua) -- Chinese President Xi Jinping on Friday stressed full and faithful comprehension and implementation of the new development philosophy when joining a deliberation during the annual session of the National People's Congress, the top legislature.

Joining discussions with fellow lawmakers from north China's Inner Mongolia Autonomous Region, Xi, also general secretary of the Communist Party of China (CPC) Central Committee and chairman of the Central Military Commission, called on the region to serve and integrate into the country's new development paradigm.

Urging Inner Mongolia to cherish and uphold its fine tradition of ethnic unity, Xi stressed cementing the sense of community for the Chinese nation.

Xi, an NPC deputy himself, exchanged views with other deputies on a wide range of topics including modern agriculture and rural vitalization.

Xi called for efforts to build Inner Mongolia into a national base for key energy and strategic resources, a production base for agriculture and animal husbandry, and a gateway for northward opening up.

Xi said Inner Mongolia should find its role in the country's establishment of the new development paradigm of "dual circulation," in which the domestic and overseas markets reinforce each other, with the domestic market as the mainstay.

He urged efforts to promote the smart and green development of related sectors toward the higher end.

Xi called on the region to continuously enhance sci-tech capabilities, deepen reform and opening up, improve its business environment and actively participate in the joint building of the Belt and Road.

Congratulating Inner Mongolia on accomplishing the poverty elimination target as scheduled, Xi said there are still arduous tasks ahead in the pursuit of common prosperity, adding that resolute efforts must be made to prevent any large-scale relapse into poverty.

Xi also underlined the development of distinctive industries with competitive edges and appropriately scaled agricultural and animal husbandry operations as part of efforts to increase the incomes of farmers and herdsmen.

Efforts should be made to step up green transformation of key industries and areas, foster cleaner production and accelerate green and low-carbon development, he said.

He also called for promoting standard spoken and written Chinese language and the use of state-compiled textbooks.

Efforts should be made to facilitate more comprehensive understanding of the Party's policies concerning ethnic groups, especially among young people, Xi said.

Xi highlighted a Party-wide campaign on CPC history learning and education, urging Inner Mongolia to make good use of its rich revolutionary legacy in the campaign.

Party members of the region should continuously improve themselves both in their thinking and work on major issues such as ethnic unity, he said. Enditem