Photo taken on Sept. 28, 2019 shows a portrait of Yuan Longping after receiving the Medal of the Republic. (Xinhua/Li He)

Having spent over five decades in hybrid rice research, Yuan, an academician with the Chinese Academy of Engineering, has helped China work a great wonder -- feeding nearly one-fifth of the world's population with less than 9 percent of the world's total land.

BEIJING, May 23 (Xinhua) -- World leaders, representatives of international organizations and experts have been mourning the death on Saturday of Chinese scientist Yuan Longping, whose lifelong research in high-yield rice varieties help feed people around the world.

"Today, we mourn the passing of a true food hero. Chinese scientist Yuan Longping saved millions of people from hunger by developing the first hybrid rice strains," the UN Department of Economic and Social Affairs tweeted.

"He passed away today at 91 (due to illness) but his legacy and his mission to end hunger lives on," it said.

Having spent over five decades in hybrid rice research, Yuan, an academician with the Chinese Academy of Engineering, has helped China work a great wonder -- feeding nearly one-fifth of the world's population with less than 9 percent of the world's total land.

Qu Dongyu, Director-General of the UN Food and Agriculture Organization, on Saturday expressed his sadness over Yuan's passing.

"Deeply saddened by the death of Prof. Yuan Longping, my dear Master. He devoted his life to the research of hybrid rice, helping billions achieve food security," wrote Qu on his Twitter account.

"You were my Inspiration. May you rest in peace," Qu added.

Born in Beijing in 1930, Yuan succeeded in cultivating the world's first high-yield hybrid rice strain in 1973, which was later grown on a large scale in China and other countries to substantially raise output.

"We have learned with great sadness the passing of the Chinese academician, father of hybrid rice, professor Yuan Longping," said Fanomezantsoa Lucien Ranarivelo, minister of Agriculture, Livestock and Fisheries of Madagascar, in a condolence message on behalf of the ministry and in his own name published Saturday on Facebook.

In Madagascar, the output of rice was raised from 3 tons to 10 tons per hectare, thanks to Yuan's fruitful research and a hybrid rice R&D center in the town of Malagasy co-built with China National Hybrid Rice R&D Center, an institution he founded.

Nowadays, sponsored by the center's training program, Madagascan technicians can travel to the Chinese central city of Changsha, where Yuan's team headquartered, and receive tailored advices.

Otilia Tomo, director of Mozambique Agricultural Research Institute, said that during a visit to China in 2019, she was impressed by varieties of saline-alkali tolerant or higher-yield rice that Yuan's team presented.

Mozambique was also challenged by the task of increasing yields, said Tomo, adding that in 2020, three varieties which her team brought from China and tested in Mozambique have delivered "satisfactory results."

The results are single-season and preliminary, noted Tomo, "but I can say they are promising," and her institute will carry on the studies to fight hunger, she said in an interview with Xinhua. 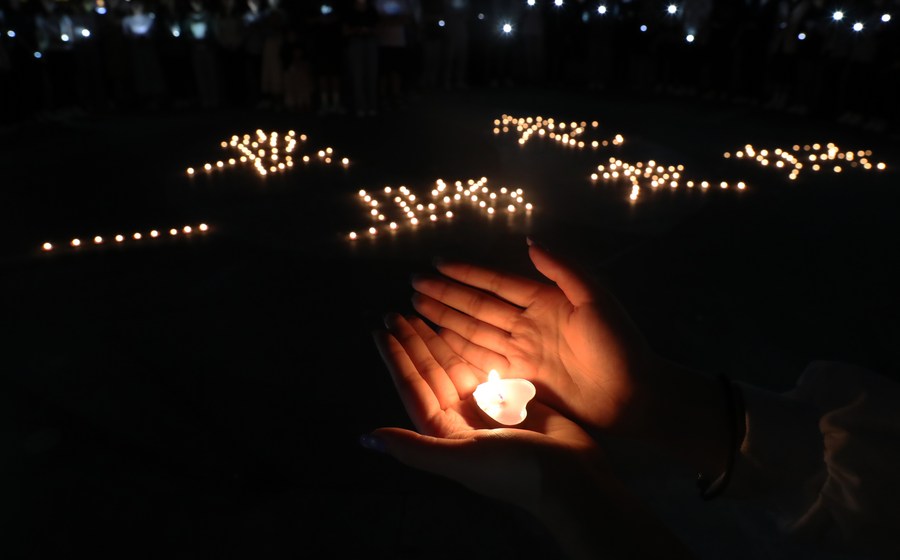 Students light candles to mourn the passing away of Yuan Longping at University of South China in Hengyang, central China's Hunan Province, May 22, 2021. (Photo by Cao Zhengping/Xinhua)

Yuan's passing is not only sad news to the Chinese people, but also a great loss to humanity, said Shahzad Ali Malik, CEO of Guard Agriculture Research and Services Co., Ltd in Pakistan.

Speaking of his first meeting with Yuan in 1998, Malik said the scientist had told him "businessmen usually wish for a speedier benefit through their investment, yet seed-breeding is not an industry with quick profit, there may even be no profit."

The talks showcase Yuan's high hopes of serious interest in rice-breeding from a potential partner, he noted.

Later on, the two sides have undergone two decades of cooperation in developing hybrid strains, and Pakistan's rice planting has ushered in an era of great economic and social benefits, helping many in the rural area to shake off poverty, according to Malik.

Ivo Mello, a renowned rice expert in Brazil, was also saddened by the news of Yuan's passing. "His legacy will be remembered for generations," said Mello, technical director of the Rice Institute of Rio Grande do Sul, Brazil's leading rice-producing state.

Ramping up research input to develop higher-yield hybrid rice strains is a matter of great importance to countries with a huge population, such as China and India, and more broadly, to the eradiation of global hunger, said Mello, whose institute has for years been promoting the growing of hybrid rice in Brazil.

By early 1970s, most biologists and agronomists around the world believed that a sustainable way of cross-breeding robust and high-yield rice varieties was a mission impossible, yet Yuan, with his research, proved the opposite and has since become a science hero of his motherland, wrote the German public broadcast ARD program "Tagesschau" in an obituary on Saturday.