Tracing the virus to its origin: The science-based facts 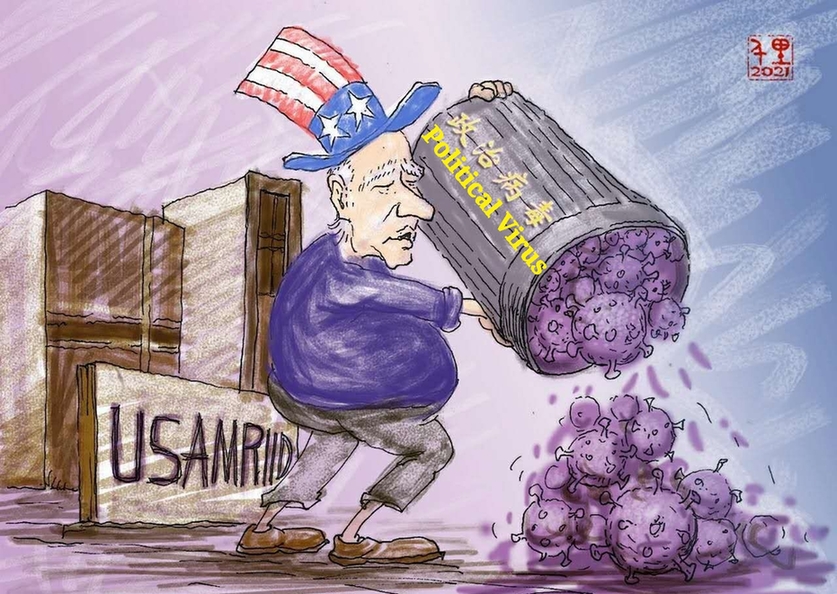 Tracing the origin of the virus on a global scale is important in helping mankind understand the zoonotic source of the coronavirus and how it transmitted to humans. It is also of great significance in protecting mankind from the next global pandemic caused by a similar virus. China undoubtedly has set an example for the world in this critical aspect.

In as early as last July, China and the WHO conducted some basic work of origin tracing, an international research team was set up consisting of 17 experts from China, and 17 from other countries as well as the WHO, the Global Outbreak Alert and Response Network (GOARN) and the World Organization for Animal Health (OIE).

The WHO team has reached the explicit conclusion that it’s “extremely unlikely” that the virus originated from a lab leak in Wuhan. However, the US is encouraging the G7 to initiate a second stage investigation over the origin of the virus, and President Biden has ordered his Central Intelligence Agency (yes, the organization that “lies, cheats and steals”) to report to him in 90 days about the source of the virus. I will have to ask the following questions:

Is the intelligence community more professional than international experts?

Will it be able to produce a tangible report within 90 days?

Why would the US and the west turn a blind eye to the report of the WHO team?

Science thrown away in the garbage

To answer these questions, we have to first go back to the report of the WHO team that came out after 28 days of research in Wuhan.

It is a lengthy report with very explicit conclusions:

● Direct zoonotic spillover is considered to be a possible-to-likely pathway;

● Introduction through an intermediate host is “likely to very likely”;

● Introduction through a laboratory incident is “extremely unlikely”.

It doesn’t take any reading comprehension skills for people to understand what these conclusions mean. Of course, one cannot rule out the possibility that those working in a “lying, cheating and stealing” agency and their employers may find it difficult to understand. But no worries, Peter Ben Embarek, the lead investigator on the WHO team offered some additional explanation at the press conference wrapping up their visit to Wuhan:

“A laboratory incident hypothesis is extremely unlikely to explain the introduction of the virus into the human population and therefore is not a hypothesis that would suggest future studies into our future work into understanding the origin of the virus.”

Following the logic of science, the origin tracing next step should take place on a global scale based on the investigatory findings in China. After all, more clues have emerged today pointing to cases much earlier than the Wuhan outbreak. It’s therefore natural to shift the attention to these new clues.

For instance, the National Institutes of Health (NIH), an agency of the U.S. Department of Health and Human Services, issued a research report indicating that antibodies to Covid have been detected in blood samples collected from multiple locations in the United States, showing that the coronavirus may have already started to spread in the US in as early as December 2019.

Also, the research team of the National Cancer Institute in Milan believed that the novel coronavirus may have begun to spread in Italy in September 2019, and based on the positive samples detected in the domestic sewage of Milan, Turin and other places by the Italian National Institute of Health in 2019, the Milan research team believes this well explains why there were many patients at that time in Milan.

Here is another one – according to the Pasteur Institute in France, the result of genetic sequencing of Covid-19 patients in the country indicates that coronavirus strains may have already spread in France prior to 2020, as its genetic traits are very different from those infected by imported cases from China.

It’s a worrying revelation that the virus broke out from multiple locations at various times, scientists are getting anxious but they are more confident that these revelations point to a much clearer direction in origin tracing.

Science will once again light up the road ahead of us.

But out of nowhere, the logic of science is interrupted – the latest order from the US government is for its intelligence agency to “come up with a clear-cut conclusion within 90 days”.

Bringing the intelligence community into scientific research is no different than rushing onto an orchestra stage and taking away the baton from the conductor’s hand. I have to say it’s a different story if you could conduct better. The question here is, do you really qualify for the job?

When it comes to a profession, learn from the professionals. I won’t disregard science as the White House did, so I paid a visit to Su Jingjing, an associate professor at Peking University’s School of Health Humanities.

Professor Su has long been researching in medicine history and international public health cooperation. Let’s take a listen what she has to say about the origin tracing of the coronavirus.

Professor Su lashed out at the absurdity of the US, “scientists must follow the spirit of science and scientific methods in tracing the source of the virus. Now Biden asks the intelligence community to produce a report within 90 days. It’s not possible, nor credible”.

“The tracing for influenza virus and HIV has lasted for decades, and there is still no globally recognized conclusion. If the intelligence community, which is by no means a scientific institution, is able to produce a result within 90 days, then the final conclusion must be a pre-designed one.”   “I have noticed a phenomenon that many of the so-called ‘evidences’ repeatedly hyped by the US and the West have been debunked long ago. There are clarifications and the media reports are all out there. But unfortunately, they have been selectively ignored. Someone is clearly attempting to ‘fabricate a truth by repeating the lie a thousand times’”.

“There are two groups of people that are so into investigating the ‘lab leak in Wuhan’”, said Professor Su. “The first group is of course those who buy such conspiracy theory, most of them are pseudo-scientists and one representative is Jamie Metzl, a member of the Atlantic Council of the United States. He took the lead in co-signing several open letters, arguing not to rule out the possibility of lab leak. Some media describes him as a WHO advisor and a genetic engineer. As a matter of fact, he is only a consultant to a WHO ethics committee. On his website he claims to be a geopolitical scientist and healthcare futurist. Truth is, he has never published even one paper on biomedicine. He did however, published numerous articles on geopolitics”.

Professor Su continued, “the other group is represented by Redfield, the director of the US Centers for Disease Control and Prevention, and Barrick, an American virologist. They did not agree with the lab-leak theory last year. On the contrary, they even openly denounced such theory last year but they quickly changed their views this year. Strange enough, neither of them provided any evidence to support their change of views.”

“Even more strange is, I noticed that as Barrick used to work with Professor Shi Zhengli from Wuhan’s P4 laboratory on a joint research program, some foreign media tried to hype Barrick’s “change of view” to confirm that the virus was leaked from the Wuhan P4 laboratory.”

The fact is, according to reports, the coronavirus that Barrick and Shi Zhengli studied together was not the virus that caused the Covid-19 pandemic. Moreover, Shi Zhengli only provided some virus sequence data and plasmids. The process of “hybridizing” the virus was not an experiment in Wuhan. It was carried out in the laboratory of the University of North Carolina where Barrick works.

“The university even published news that it was its own researchers, not those from the Wuhan laboratory, that found the possibility of human-to-human transmission of the virus. If it was a leak, it should be the leak from Barrick’s laboratory that makes more sense”.

Now we seem to have the answers to the questions I asked at the beginning:

Is the intelligence community more professional than international experts? NO!

Will it produce a tangible and credible report within 90 days? NO!

Why some people in the US and the west are turning a blind eye to the tracing work of the WHO? Because they have preset conclusions and presumptions of guilt.

Among scientists in the worlds, there are tons of those who share similar views with Professor Su from China’s Peking University. But their voice is seldomly heard on western media. (Strange! Why is so?)

After the Biden administration requested “further investigation over the source of the virus”, the World Health Organization’s top emergency experts said that virus tracing had been “politically infected.”

Maksutov, Director of the Russian National Research Center for Viruses and Biotechnology, believes that among experts there is consensus on the natural origin of the novel coronavirus. The virus is 20% different from the previous coronavirus, therefore it is not a man-made virus.

Vincent Racaniello, a professor of microbiology and immunology at Columbia University in the United States, spoke bluntly: “We must investigate the viruses in wild nature. The story of the so-called lab-leak is over! The reason why the United States is repeatedly hyping the source of the virus is that they want to politicize the issue. They have paid no regard to science”.

As I write now, thousands of Covid-19 variants are emerging at different parts of the world.

It’s time to wake up. It’s not a war of one country against another. It’s the fight of humanity against a novel coronavirus. As we waste our time indulging ourselves in selfishness and stupidity, the virus is getting stronger with its mutations.

As we trace the origin of this deadly virus, we need to let science talk and let politics stay off the track, because this is the only way out. Any act that obstructs science and wastes time and resources on gaining political interest and seeking manipulation will only serve as an accomplice of the virus.

Contributed by Datou and Wenhua from Official WeChat account of Poquanle