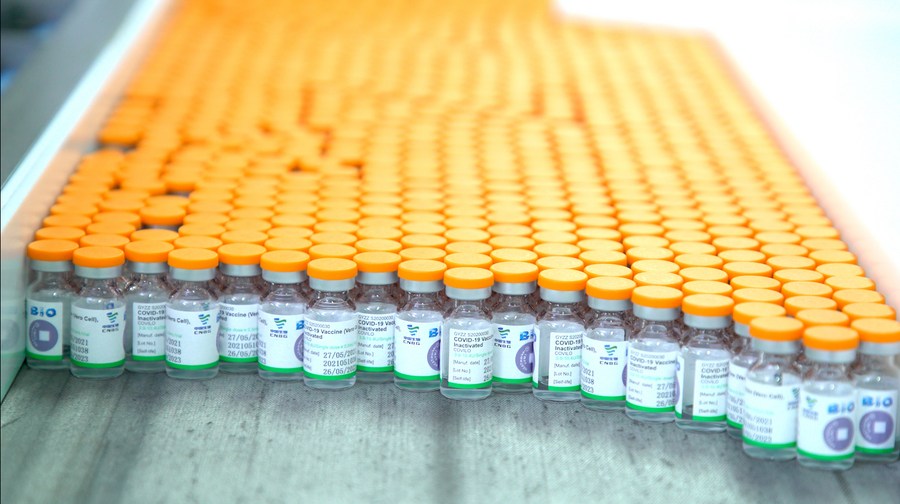 The Chinese Sinopharm and Sinovac vaccines have been approved earlier this year by the World Health Organization (WHO) for emergency use.

China is the world's largest vaccine supplier, having supplied more than 480 million doses of COVID-19 vaccines to the international community, provided vaccine assistance to nearly 100 countries, and exported vaccines to more than 50 countries.

With Chinese vaccines being administered worldwide, they have been found, according to multiple studies, highly effective in preventing infection, hospitalization, severe illness and death from the virus.

Here are some figures &facts: 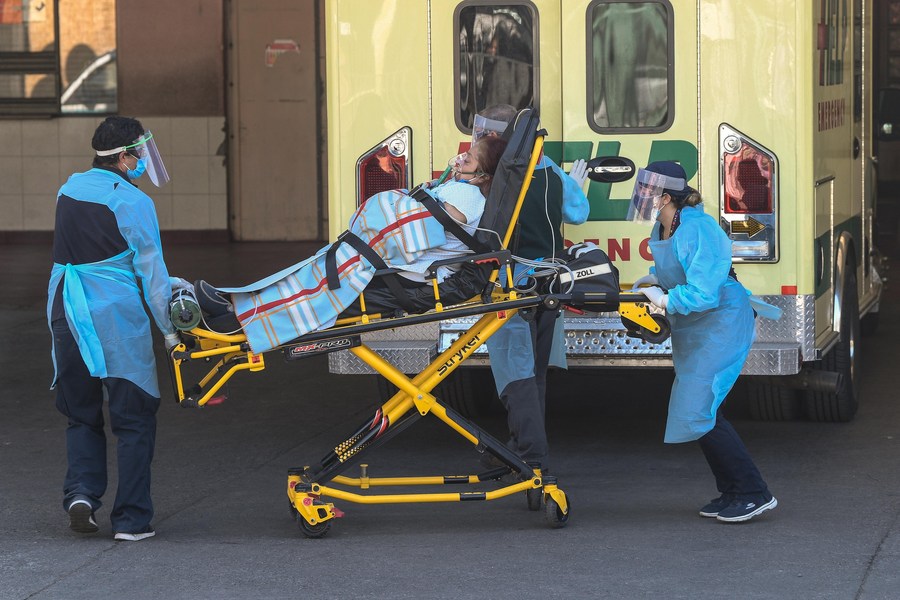 SANTIAGO -- China's CoronaVac COVID-19 vaccine effectively prevented COVID-19 in Chile, with the adjusted vaccine effectiveness reaching 90.3 percent for the prevention of severe disease, according to a study recently published in the New England Journal of Medicine.

A nationwide mass vaccination campaign was conducted from Feb. 2 to May 1, and a cohort including approximately 10.2 million people aged 16 years and above was used, according to the study titled Effectiveness of an Inactivated SARS-CoV-2 Vaccine in Chile published.

CoronaVac uses an inactivated whole virus, compelling a recipient's immune system to attack the harmless form of the virus by producing antibodies to fight it off, thus leading to immunity. 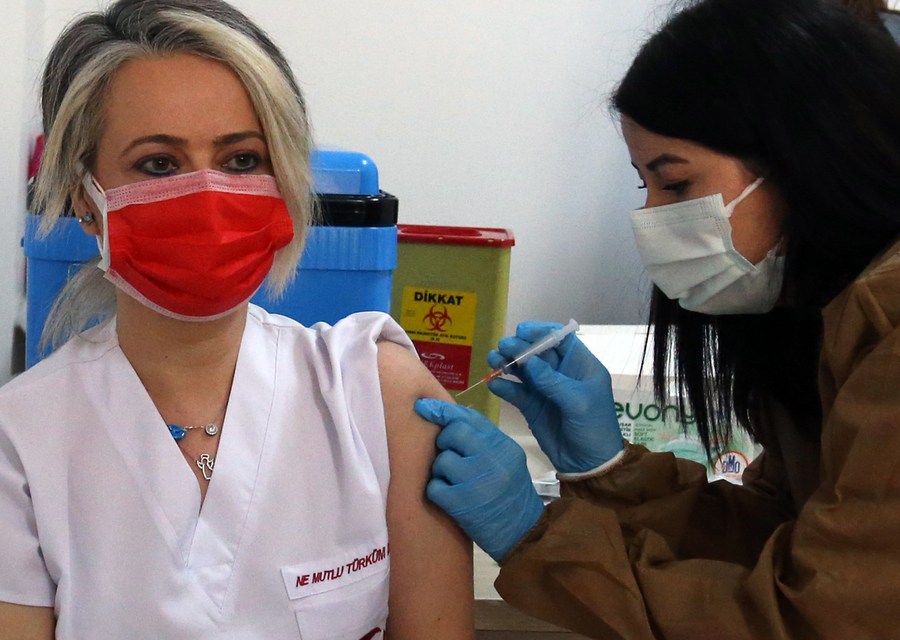 LONDON -- Interim analysis of Phase 3 clinical trial of the CoronaVac vaccine in more than 10,000 participants in Turkey suggests the efficacy of two doses of the vaccine is 83.5 percent against symptomatic cases of COVID-19, according to a study published in The Lancet, a weekly peer-reviewed general medical journal.

The randomized controlled clinical trial was conducted in Turkey using the CoronaVac COVID-19 vaccine, developed by Chinese pharmaceutical company Sinovac Biotech. The trial involved over 10,000 participants aged 18 to 59 years. They were randomly assigned to receive two doses of the vaccine (given 14 days apart) or a placebo.

The preliminary findings indicated that CoronaVac induced a robust antibody response, and no severe adverse events or deaths were reported among the participants. Most adverse events were mild and occurred within seven days of an injection, according to the study.

However, more research is needed to confirm vaccine efficacy in the long term, in a more diverse group of participants, and against emerging variants of concern, said the study.

CoronaVac uses an inactivated whole virus, compelling a recipient's immune system to attack the harmless form of the virus by producing antibodies to fight it off, leading to immunity.

The vaccine can be stored and transported at 2 to 8 degrees Celsius and has been in Phase 3 trials since mid-2020 in Brazil, Indonesia, Chile, and Turkey, according to The Lancet.

"One of the advantages of CoronaVac is that it does not need to be frozen, making it easier to transport and distribute. This could be particularly important for global distribution, as some countries may struggle to store large amounts of vaccine at very low temperatures," said Murat Akova, lead author of the study and a professor at Hacettepe University School of Medicine in Ankara. MONTEVIDEO -- The COVID-19 mortality rate among Uruguayans aged 18 to 69 who were vaccinated with Sinovac vaccine fell by more than 95 percent, according to the latest Vaccine Effectiveness report from the Public Health Ministry.

Two weeks after receiving the second dose of the CoronaVac vaccine, developed by Chinese drugmaker Sinovac, mortality fell by 95.3 percent among the vaccinated population aged 18 to 49, and by 95.2 percent among those aged 50 to 69, showed the report.

Meanwhile, CoronaVac reduced hospitalization in intensive care units by 94.4 percent among those under the age of 49 and by 92.2 percent among people aged 50 to 69.

The ministry study monitors the "vaccine effectiveness and safety for SARS-CoV-2" by an interdisciplinary team. 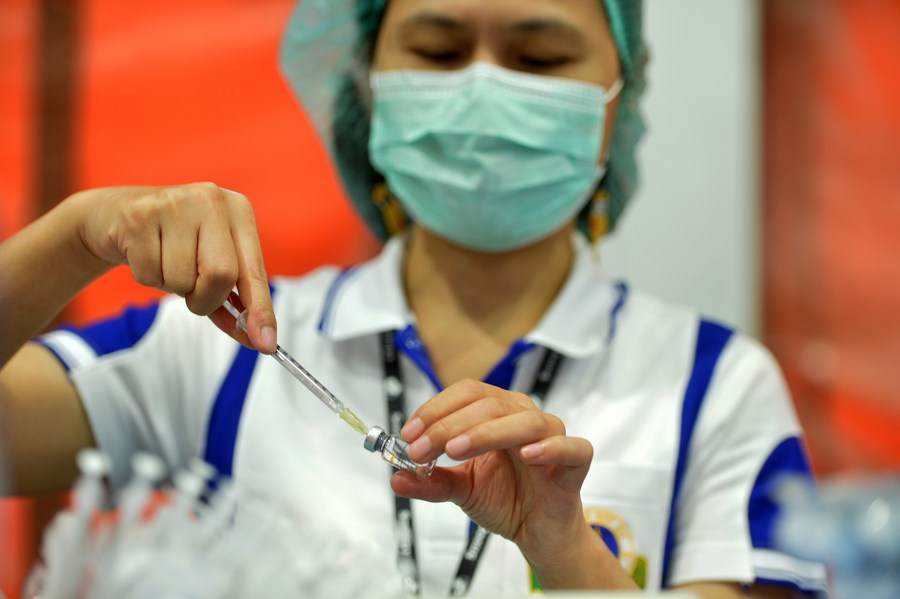 A nurse prepares a dose of the COVID-19 vaccine developed by Chinese pharmaceutical company Sinovac in Bangkok, Thailand, May 12, 2021. (Xinhua/Rachen Sageamsak)

BANGKOK -- A new vaccination study conducted by Thailand's Chulalongkorn University has found that China's Sinovac vaccine has extremely high efficacy in boosting immune responses against COVID-19, according to media reports.

The study run by the Center of Excellence in Clinical Virology of the Faculty of Medicine at the university showed that 99.49 percent of the recipients had developed antibody responses four weeks after their second shots, the Bangkok Post said, quoting the study results.

Three weeks after the first shot, around 66 percent of the recipients had developed immune responses, the report added.

The number of antibodies against the coronavirus was measured with Roche Elecsys Electrochemiluminescence Immunoassay, a qualitative detection of total antibodies developed against the virus in people's blood samples before and after the vaccination period, said the research group. 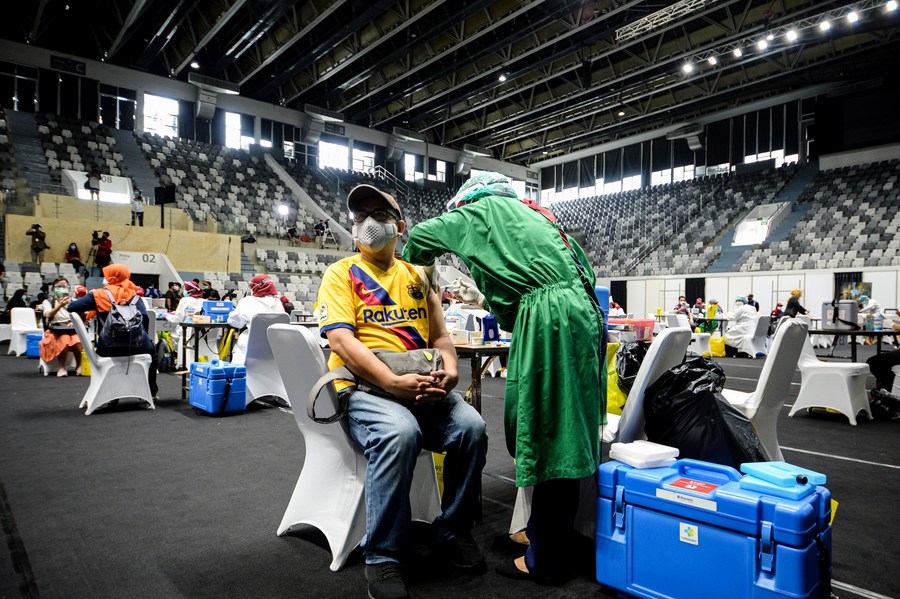 JAKARTA -- China's Sinovac vaccine against COVID-19 has appeared to be highly efficacious, as an overwhelming majority of vaccinated health workers were found protected from death and hospitalization, according to a Bloomberg report.

Pandji Dhewantara, an official of the country's health ministry, told a press conference that among the 128,290 health workers vaccinated with Sinovac vaccines and tracked from January to March, 98 percent of them were protected from death and 96 percent from hospitalization as soon as seven days after the second dose.

Dhewantara also said that 94 percent of the workers had been protected against symptomatic infection.

The Indonesian study compared vaccinated people against the non-vaccinated to derive the estimated effectiveness, said the report. The median age of the participants is 31 years old.

In an interview with Bloomberg, Indonesian Health Minister Budi Gunadi Sadikin said that another group of 25,374 people tracked showed the same effectiveness data for hospitalization and infection with the aforementioned group. Protection against death was 100 percent in the smaller group.

"We see a very, very drastic drop," in hospitalizations and deaths among medical workers, Sadikin was quoted as saying. 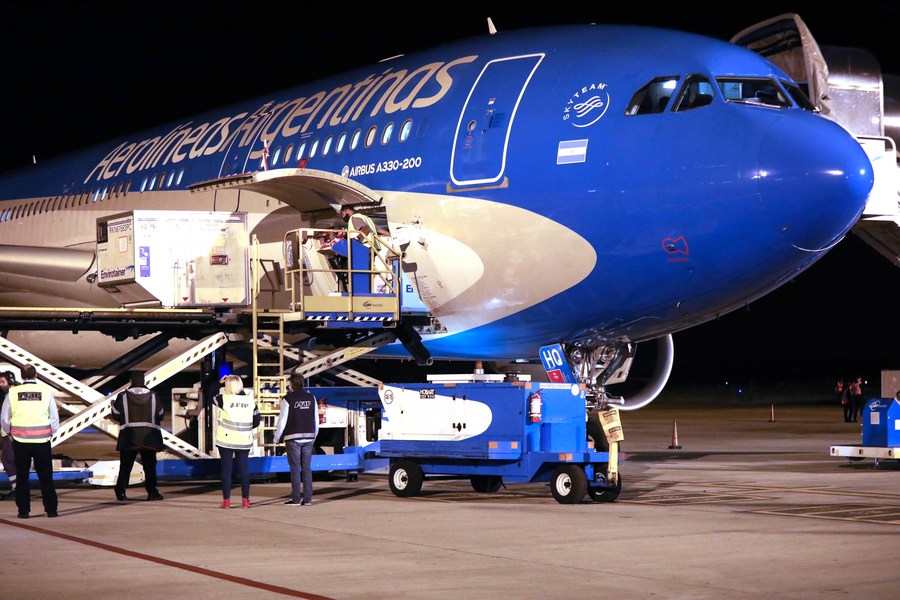 BUENOS AIRES -- The COVID-19 vaccine developed by Chinese pharmaceutical company Sinopharm is 84 percent effective in preventing death from the disease, showed a report by the Argentine Ministry of Health.

The document, titled "Study of the National Vaccination Campaign's Effectiveness in Reducing Mortality from COVID-19 in People aged 60 and over," was prepared by the ministry with cases from the country's 24 provinces during the period from Jan. 1 to June 22.

The study found that the Sinopharm vaccine has an efficacy of "84 percent after the application of its two doses," state news agency Telam reported.

The effectiveness against COVID-19 mortality in the Sinopharm vaccine reached 61.6 percent with the application of the first dose in the 147,908 cases analyzed, and increased to 84 percent after the second dose was applied to the same number of people.

In February, the country authorized the emergency use of the Sinopharm vaccine after Health Minister Carla Vizzotti signed a resolution, an official measure which highlighted the "safety, immunogenicity and efficacy" of the vaccine.

In an interview with Xinhua, Argentine infectious diseases expert Martin Hojman said that the Sinopharm vaccine is "effective" and its arrival in the South American country is "excellent news."

"It has two doses. It is an inactivated vaccine that has proven efficacy and no adverse effects, it is a safe vaccine," said Hojman, a member of the Argentine Society of Infectious Diseases.