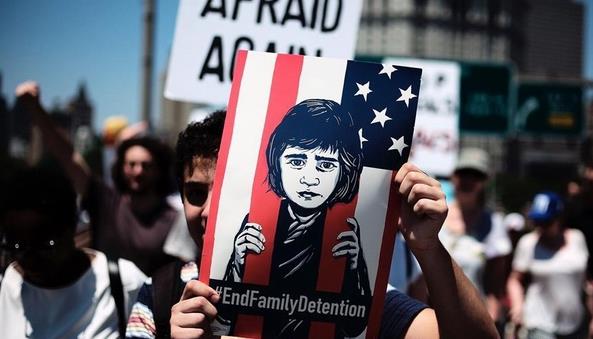 According to foreign media, the Biden administration has decided to stop phasing out the eviction order, claiming that the abolishment of the order will “aggravate the over-crowding of Department of Homeland Security and pose great risks to public health.” This decision has been criticized by the media in the United States as it seriously breaches the government’s previous commitment. The Biden administration’s capriciousness on immigration policy has once again revealed the fact that various issues on human rights are emerging domestically and the status quo is deteriorating. It has also exposed the utilitarianism, hypocrisy and "double standard" of the “US-style human rights”.

Immigration has constantly been a major concern of the US political arena and the general public. Since the 1980s, the US has been plagued by illegal immigration. However, due to complexities in political, economic and racial issues, the two parties have huge differences on this issue, making it difficult to push forward any comprehensive reform on immigration legislation. The Trump administration signed hundreds of executive orders on immigration and implemented a "zero tolerance" policy for illegal immigrants, allowing border law-enforcement officers to deport immigrants who expected to take refuge in the US. The policy was so harsh that it caused intense domestic doubt and discontent, especially among ethnic minorities.

After taking office, eager to honor campaign promises, the Biden administration implemented new immigration policies and, urged by multiple non-governmental organizations, announced to stop the eviction order before July this year. However, it announced to cancel the plan because of changes in domestic pandemic situation and the influx of migrants at the southern border.

The Biden administration’s capriciousness on terminating the eviction order discloses the utilitarianism of “US-style human rights”. Behind the eagerness to “rectify” the immigration policy of the Trump administration, the Biden administration is actually aimed at responding to pressure from immigration interest groups and consolidating the seats of traditional ethnic minorities in the Democratic Party, not at “restoring the justice, humanity and order of the immigration system" as it claims. According to statistics, 30 million eligible African American voters overwhelmingly supported Biden in the 2020 US presidential election. Biden had the support of 87 percent of African Americans, as well as 65 percent of Hispanics and 61 percent of Asian Americans in exit polls. During the Trump presidency, domestic racial issues continually intensified. On one hand, common inequality in politics and economy and stern immigration policies have caused discontent among minority voters. On the other hand, the George Floyd incident has shocked the nation during the pandemic. But in order to cater to white Republican voters, especially racists among southern white voters, Trump never clearly condemned white racists, which triggered strong dissatisfaction in American society. One of the significant reasons why Biden won the election was he regarded the racial matters as a core issue only second to economy.

Soon after taking office, Biden submitted an immigration reform bill to Congress called US Citizenship Act of 2021, suspended several deportations to "enforce immigration equally and effectively", and terminated financial appropriation for the construction of the border wall. This shift in immigration policies seems to be a periodical retreat from the longstanding values confrontation, political wrestling and social disintegration in American society. However, in essence, the Biden administration's previous commitment to halt the eviction order and the Trump administration's enactment, both meant to maintain the interests of their political forces, go in the same way. It is just aimed at attracting voters under the guise of emphasizing the "tolerance" and "justice" of immigration policies and attaching importance to human right issues.

The Biden administration’s sudden change back to continuous enforcement of the eviction order reveals the hypocrisy of “US-style human rights”. The administration once made a promise to cease deportation, in accordance with the Democratic Party's opinion on enforcing immigration policy flexibly. But adjusting immigration policy for votes has backfired in the real world. Since the beginning of 2021, the immigration frenzy and border crisis at the US-Mexico border has become a reality. The Biden administration has once again announced to deport immigrants continually for so-called "pretexts on public health" and the decree will remain indefinitely in effect.

The US, as the world's most zealous human rights preacher, often judges human rights issues and conditions in other countries, but turns a blind eye to humanitarian crises at its own borders. According to US media, 21 people died in US immigration detention centers in 2020 alone. Of the 266,000 immigrant children detained by the US in recent years, more than 25,000 have been held in detention for more than 100 days and nearly 1,000 in refugee shelters for more than a year. Nearly 19,000 were unaccompanied and underage among the illegal immigrants intercepted by the US this March, hitting a record high within a single month since relevant data was released in 2009.Over-crowded and poorly-equipped detention centers at the US-Mexico border exposed a large number of children to health risks and also greatly increased the risk of being infected with the COVID-19.

The hypocrisy of the “US-style human rights” has been fully revealed with the Biden administration’s capriciousness on immigration policy. As the number of illegal immigrants at the US-Mexico border reaches a record high in 20 years, the Democratic and Republican parties have been shifting responsibilities to each other. Alejandro Mayorkas, head of the US Department of Homeland Security, accused that the former government “destroyed” the immigration system, which the new administration has to rebuild from scratch. The Republicans, including Trump, have lashed out at the White House for immigration policies. They argued that the Biden administration has not taken measures to halt illegal immigration and not prepared for the expansion of detention centers with the surge in illegal immigration. With the accelerating spread of the Delta variant of COVID-19 and increasing pressure on pandemic prevention, the Biden administration, breaking its previous commitment, continued to enforce the eviction order instead of organizing immigrants to be tested and quarantined to disrupt the spread of the novel coronavirus.

In the country that has always praised itself as the "beacon of human rights," human rights issues are ubiquitous, including racial and gender discrimination, wealth gaps, gun violence and so on. The pandemic has further aggravated human rights problems accumulated in the US, exposing alarming phenomena and records of abuses leading to the collapse of the “beacon”. Some American experts have said that “It is a fact that rapid deportation has ruined the human rights and the last thing the Biden administration should do is to force the children, parents and other refugees to accept this rapid deportation process.” However, the administration still decided to halt the eviction order. The humanitarian crisis at the US-Mexico border is the result of the US' long-term double standard featuring stern discipline for others and lenient treatment for itself on human rights.