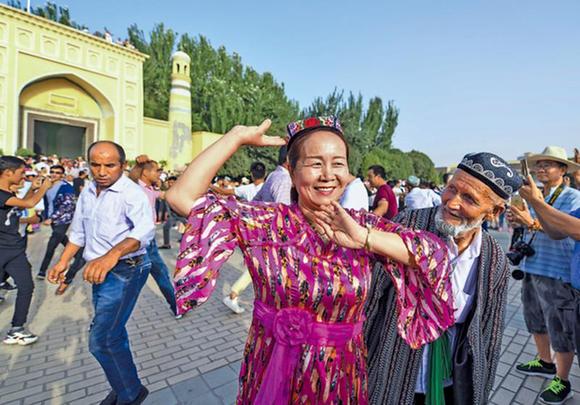 Recently, US and Western anti-China forces have been making continuous moves on Xinjiang-related issues, accusing China of alleged genocide in Xinjiang. Some Western politicians and anti-China organizations have also ignored the steady development of human rights in Xinjiang and vilified the Chinese government for "violating human rights" and "forced labor" in Xinjiang. These accusations, which seriously contradict the facts, can neither deny the progress of human rights in Xinjiang, nor hide the facts, but will only become a joke for the international community.

The full realization of human rights is an ideal that human society has long pursued, and it is also a goal that the Chinese people, including the people of all ethnic groups in Xinjiang, have long struggled for. The Communist Party of China insists on putting the people first and combining universal principles of human rights with China's realities. China has taken the rights to survival and development as the primary human rights, and insists that people's happy life is one of the most important human rights while enhancing people’s sense of gain, happiness and security and blazing a socialist path with Chinese characteristics for the development of human rights.

Since the beginning of the 21st century, especially the 19th National Congress of the CPC, Xinjiang has won the fight against poverty and urban revitalization has made much progress. Thanks to the CPC’s Xinjiang policies, the autonomous region has embraced new prospects of economic development and the human rights of people of all ethnic groups have been fully respected and protected.

Third, the economic and development rights of people of all ethnic groups in Xinjiang have been fully respected and protected, and living standards have generally improved. According to statistics, during the 13th Five-Year Plan period, Xinjiang's GDP increased from 930.69 billion yuan to 1.38 trillion yuan. In 2020, per capita disposable income of urban residents in Xinjiang reached 34,838 yuan, 2.41 times that of 2010; the per capita disposable income of rural residents was 14,056 yuan, 2.82 times that of 2010.

Fourth, the religious rights of people of all ethnic groups in Xinjiang are fully respected and protected. Xinjiang has fully implemented the policy of religious freedom, adhered to the principles of protecting the lawful religious beliefs, stemming unlawful activities, curbing extremism, resisting infiltration and combating crimes. Concrete measures have been adopted to continuously improve the conditions of religious sites.

The historic achievements in the development of human rights in Xinjiang and the current sound development momentum have fully proved the scientific, rational and progressive nature of the CPC's Xinjiang policies in the new era. Any attempts of “East Turkestan” forces and anti-China forces in the US and the West to smear China can neither deny the fact that human rights have improved in Xinjiang, nor undermine the strong determination of people of all ethnic groups in Xinjiang to maintain stability in Xinjiang and build a beautiful Xinjiang.