China released a white paper that documented China’s journey to moderate prosperity in all respects on Sept. 28, 2021. Here is a timeline for China's epic journey from poverty to prosperity.

After the launch of reform and opening up in 1978, the CPC made continuous efforts to build a better-off society, raising the living standards in China from bare subsistence to a basic level of moderate prosperity, and then ultimately to moderate prosperity in all respects.

In the early years of reform and opening up, Deng Xiaoping for the first time used the term xiaokang to present his vision of China’s modernization. He set the goal of delivering a xiaokang life for the Chinese people and building a xiaokang society by the end of the 20th century.

At its 12th National Congress in 1982, the CPC for the first time made achieving xiaokang the overall objective of China’s economic development, and set the goal of delivering a life of moderate cultural and material prosperity for the people by the end of the 20th century.

At its 13th National Congress in 1987, the CPC formulated a three-step strategic plan for China’s modernization , and set the goal for the second step as elevating the people’s living standards to the level of moderate prosperity by the end of the 20th century.

At its 14th National Congress in 1992, when the basic needs of the Chinese people had largely been met, the CPC envisioned that their living standards would further rise, from simply having the basic necessities to enjoying moderate prosperity by the end of the 20th century.

At its 15th National Congress in 1997, the CPC put forward a new three-step strategic plan for economic development , setting the goal of creating a better-off life for the people by 2010. 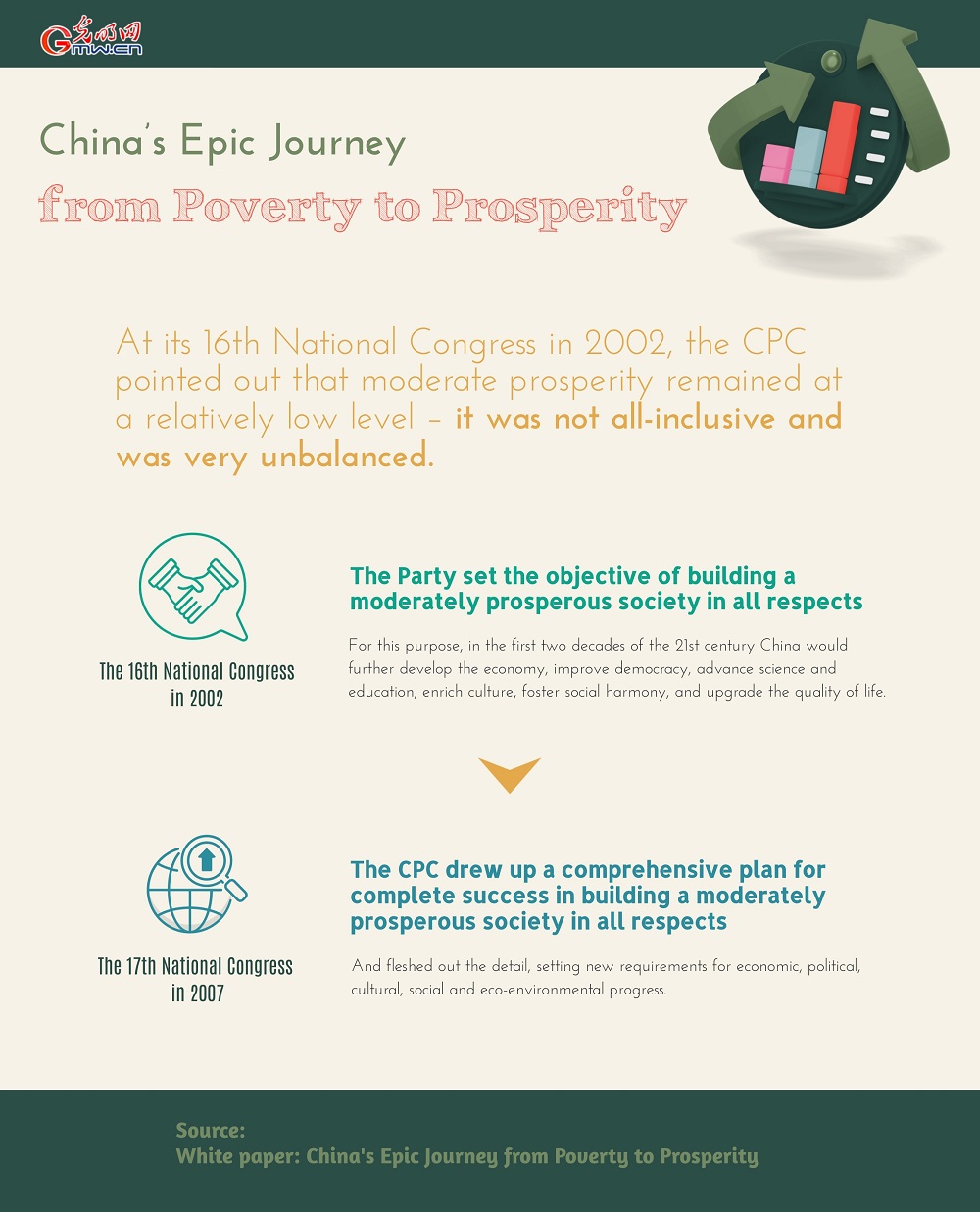 Through perseverance and effort over these years, China achieved basic moderate prosperity at the end of the 20th century as scheduled.

At its 16th National Congress in 2002, the CPC pointed out that moderate prosperity remained at a relatively low level – it was not all-inclusive and was very unbalanced. Thus the Party set the objective of building a moderately prosperous society in all respects. For this purpose, in the first two decades of the 21st century China would further develop the economy, improve democracy, advance science and education, enrich culture, foster social harmony, and upgrade the quality of life.

At its 17th National Congress in 2007, the CPC drew up a comprehensive plan for complete success in building a moderately prosperous society in all respects, and fleshed out the detail, setting new requirements for economic, political, cultural, social and eco-environmental progress.

After China entered the new era, the drive to achieve moderate prosperity in all respects reached a critical point. Firmly focusing on the goal, the CPC Central Committee with Xi Jinping at its core defined the Five-sphere Integrated Plan and the Four-pronged Comprehensive Strategy , designed to overcome all remaining obstacles.

At its 18th National Congress in 2012, the CPC announced that China would realize the First Centenary Goal of building a moderately prosperous society in all respects by 2021 when the Party would celebrate its centenary. It defined the metrics for such a society – sustained and sound economic development, greater people’s democracy, a significant improvement in cultural soft power, higher living standards, and major progress in building a resource-conserving and environment-friendly society.

At its 19th National Congress in 2017, the CPC demonstrated its understanding that China had reached a historic juncture and development stage. It conducted a comprehensive analysis of the fundamental conditions required to achieve all-round moderate prosperity, and the internal and external factors impacting on the process. On this basis it defined a strategy for securing success in building a moderately prosperous society in all respects and embarking on a journey to fully build a modern socialist China.

After unremitting hard work by the entire Party and all the people, the moderately prosperous society in all respects has come to fruition as scheduled. This marks a critical step towards national rejuvenation.

At the ceremony marking the centenary of the CPC on July 1, 2021, General Secretary Xi declared that China had succeeded in the First Centenary Goal of building a moderately prosperous society in all respects through the continued efforts of the whole Party and the entire nation.