-- Democracy is a common value of humanity and an ideal that has always been cherished by the Communist Party of China (CPC) and the Chinese people.

-- This year marks the centenary of the CPC. Since its founding in 1921, the Party has taken wellbeing for the Chinese people and the rejuvenation of the Chinese nation as its abiding goals, and has made continuous efforts to ensure the people's status as masters of the country. China is a country with a feudal history dating back several thousand years that descended into a semi-feudal and semi-colonial society after the Opium War of 1840. Over the past hundred years, the Party has led the people in realizing people's democracy in China. The Chinese people now truly hold in their hands their own future and that of society and the country. 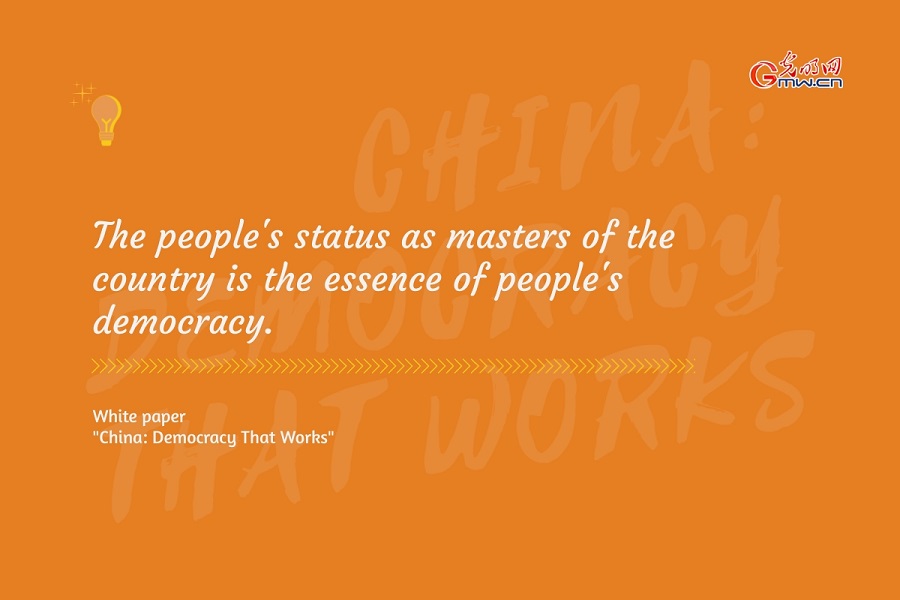 -- The people's status as masters of the country is the essence of people's democracy. Since the 18th CPC National Congress in 2012, with a deeper understanding of China's path to democracy and the political system, the Party has developed whole-process people's democracy as a key concept and striven to translate it and relevant democratic values into effective institutions and concrete actions. 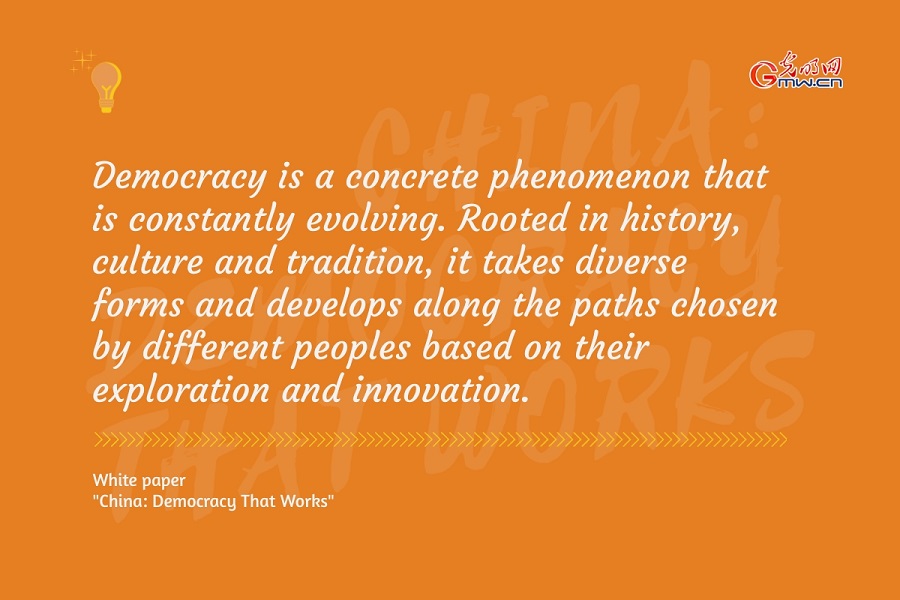 -- Democracy is a concrete phenomenon that is constantly evolving. Rooted in history, culture and tradition, it takes diverse forms and develops along the paths chosen by different peoples based on their exploration and innovation.

-- The best way to evaluate whether a country's political system is democratic and efficient is to observe whether the succession of its leaders is orderly and in line with the law, whether all the people can manage state and social affairs and economic and cultural undertakings in conformity with legal provisions, whether the public can express their requirements without hindrance, whether all sectors can efficiently participate in the country's political affairs, whether national decision-making can be conducted in a rational and democratic way, whether people of high caliber in all fields can be part of the national leadership and administrative systems through fair competition, whether the governing party is in charge of state affairs in accordance with the Constitution and the law, and whether the exercise of power can be kept under effective restraint and supervision. 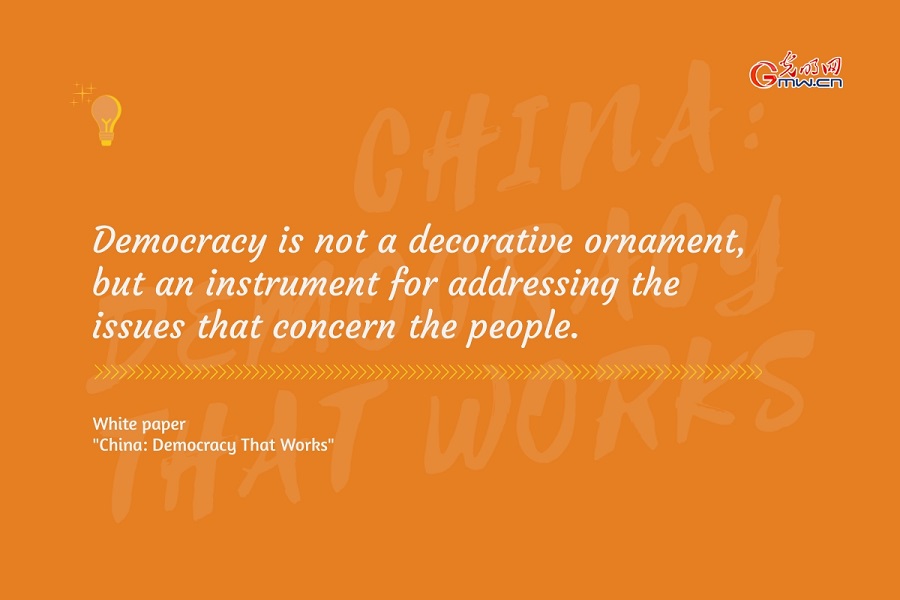 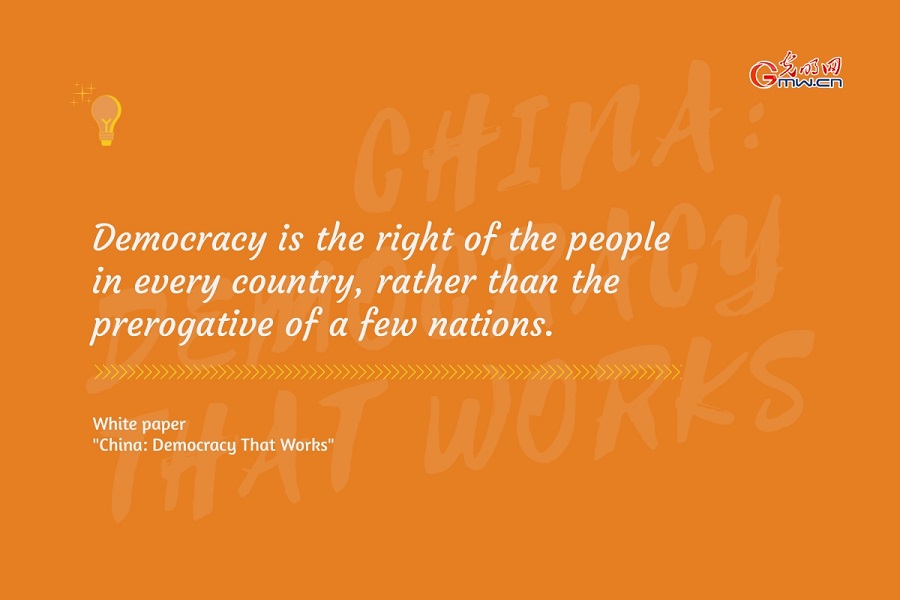 -- Democracy is the right of the people in every country, rather than the prerogative of a few nations. Whether a country is democratic should be judged by its people, not dictated by a handful of outsiders. Whether a country is democratic should be acknowledged by the international community, not arbitrarily decided by a few self-appointed judges. There is no fixed model of democracy; it manifests itself in many forms. Assessing the myriad political systems in the world against a single yardstick and examining diverse political structures in monochrome are in themselves undemocratic. 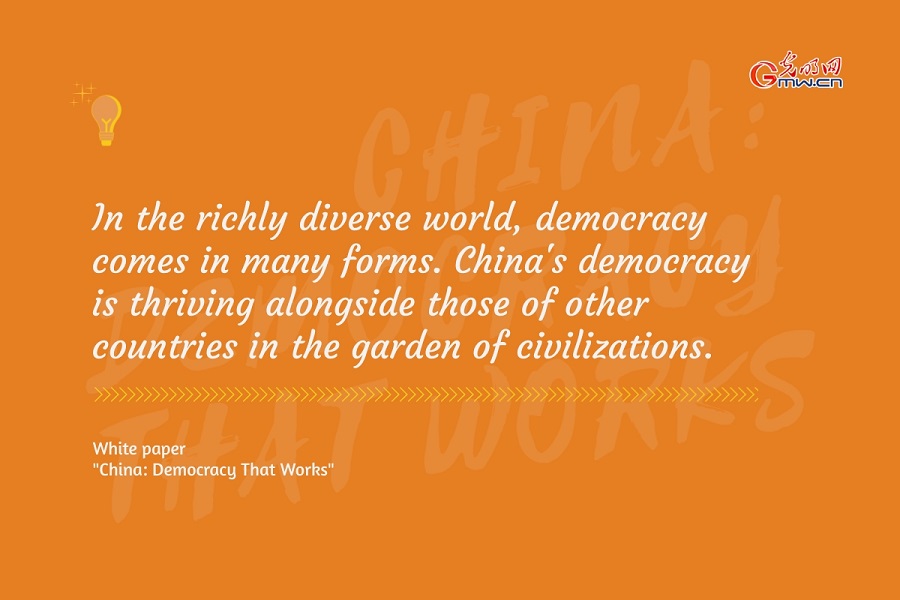 -- In the richly diverse world, democracy comes in many forms. China's democracy is thriving alongside those of other countries in the garden of civilizations. China stands ready to contribute its experience and strength to global political progress through cooperation and mutual learning.