By Wang Ruoxin and Wang Xinyuan

On February 24, CCG (Center for China and Globalization) launched its new book “Transition and Opportunity: Strategies from Business Leaders on Making the Most of China’s Future”. The book was edited by CCG and published by Springer Nature at the think tank’s headquarter in Beijing. A roundtable seminar was held following the book’s release, discussing the future of multinational companies (MNCs) in China. Representatives and executives from the publishing industry, the International Chamber of Commerce, and MNCs attended the seminar. 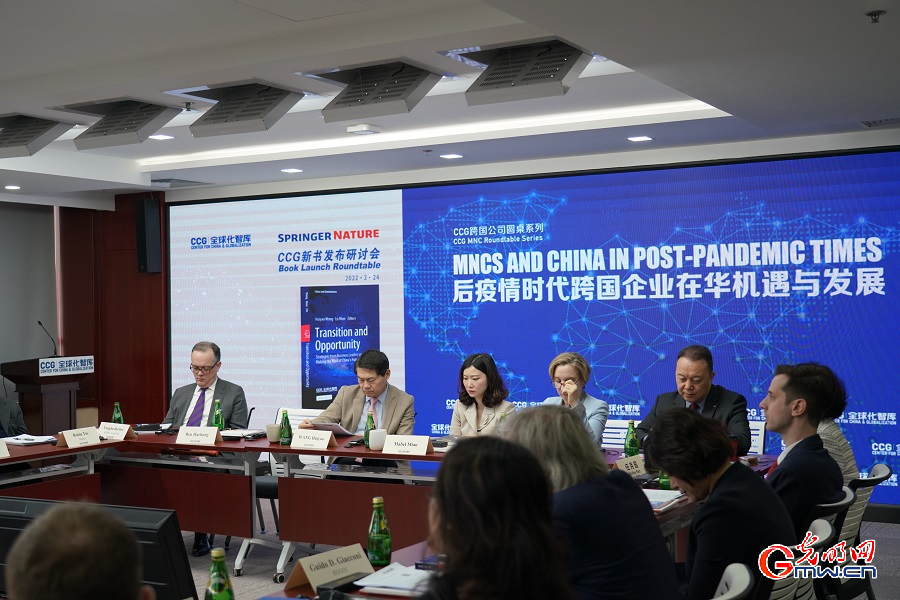 The book collects the thoughts and insights of nine leaders from the EU Chamber of Commerce in China, the US-China Business Council and the British Chamber of Commerce in China, and eight executives from MNCs such as the Airbus, Daimler, DSM, Michelin, and seven research and consulting experts from PWC, KPMG, Accenture, etc., who shared their observation on development opportunities in China, international economic cooperation, and multinationals operations. With authors from Brazil, China, France, Germany, Switzerland, the UK and the US, this is the first English-language book jointly published by a Chinese institution and an international publisher that brings together global elites analyzing the potential, opportunities and challenges in China’s economic transition.

In the face of the unprecedented changes in a century, CEOs and senior executives of leading multinational companies in China and leaders of foreign chambers of commerce in China offered a series of insights on the potential, challenges and opportunities for China and MNCs and other business organizations in the post-pandemic era and throughout China’s economic transition, offering a slew of constructive advices for China’s policy makers in formulating reasonable business policies, promoting the sustainable and healthy development of China’s economy, and achieving win-win result for MNCs, business organizations and China in general. 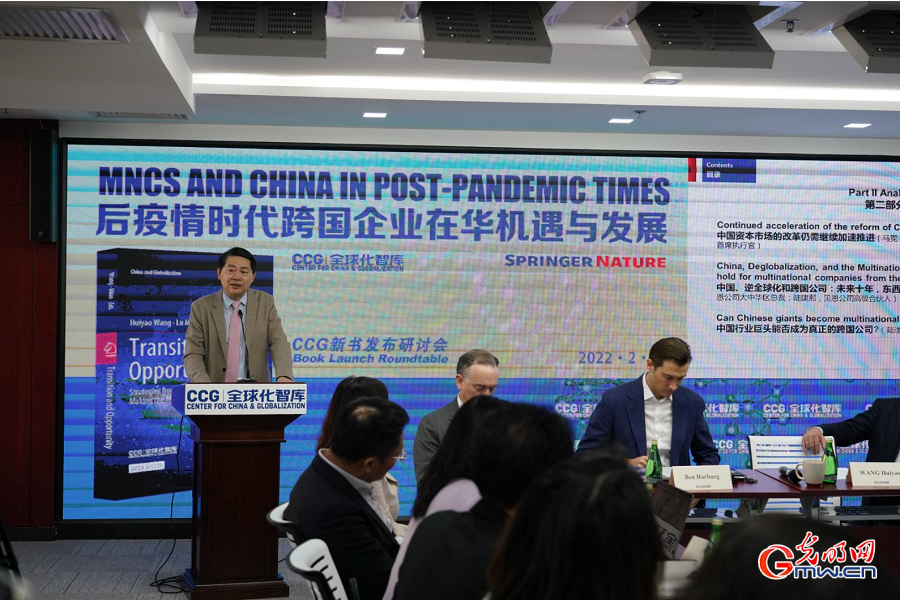 MNCs have long played a crucial role in China’s economic development, and China’s vast market and increasingly open business environment have provided opportunities for MNCs as well. With leading expertise on some of the most pressing economic, technological and environmental issues, MNCs can take full advantage of China’s opportunities to shape their own business strategies. At the same time, MNCs’ observations on China’s business environment also provide valuable insights and feedbacks to policy makers. This book aims just at sharing those valuable ideas with its readers. 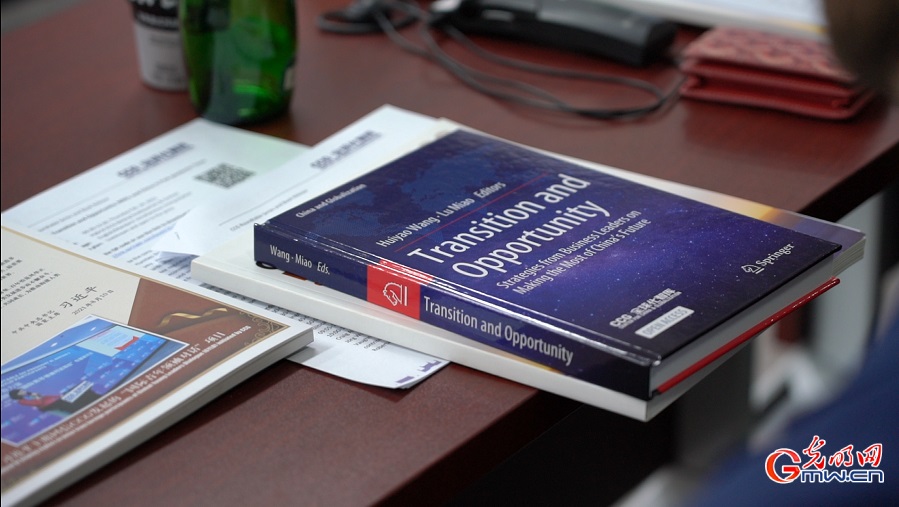 The book is divided into three parts. The first part, “Macro Perspectives” discusses how to further promote economic globalization and develop international business under the current international situation so as to achieve a real win-win situation; in the second part "Analysis and Recommendations”, well-known MNCs and consulting firms analyze the new opportunities for China from various perspectives and areas of expertise, and provide advice on how to make the most of China’s development opportunities; The third part, “Case Studies of Multinational Companies Operating in China” showcases how some MNCs have adapted to the Chinese market environment and achieved business success. Numerous senior executives have shared their insights in the book, such as Craig Allen, President of the U.S.-China Business Council; Jörg Wuttke, President of the EU Chamber of Commerce in China; Martin Mueller, President of the Swiss Chamber of Commerce in China and Founder and Director of SKC Group in China; Joseph Cash, Policy Analyst at the UK-China Business Council; Hong Zhu, Chairman of Accenture Greater China; Samantha Zhu, Chairman of Accenture Greater China; Denis Depoux, Co-President of Roland Berger Global Management Board; Mark Austen, CEO of Asian Securities Industry and Financial Markets Association; Hubertus Troska, Chairman and CEO of Daimler Greater China. 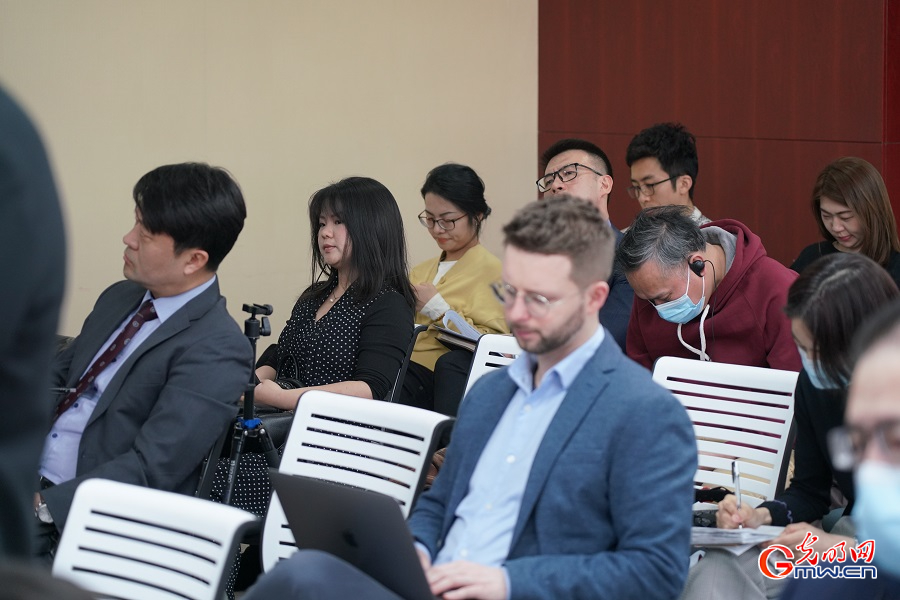 The book marks yet another important publication of the “China and Globalization” series edited by Dr. Wang Huiyao, Founder and President of CCG and Dr. Miao Lu, CCG Secretary General. The “China and Globalization” series published previously the book “Consensus or Conflict?”, which collated the ideas of 38 global opinion leaders; another book under the series, “The Asian 21st Century” authored by Singapore’s renowned diplomat and expert Kishore Mahbubani was also widely recognized across all walks of life. Within two months, the book registered nearly 2 million times of downloads online. Boasting an objective and impartial global perspective, this publication series brings together the insights of influential policy researchers and makers, industry experts and opinion leaders from China and around the world.

As one of the top 100 think tanks in the world and the only Chinese think tank holding “UN Special Consultative Status”, CCG has established a publishing center to leverage the network of think tank experts and intellectual resources to popularize ideas and its research results. The CCG Publishing Center has established close cooperation with globally renowned publishers such as Springer Nature, Edward Edgar, Palgrave Macmillan and Oxford University Press, as well as domestic publishers such as the People’s Publishing House, Sanlian, CITIC, Social Science, and Social Science Press, and more than ten monographs, feature books and research reports are published each year in both English and Chinese.