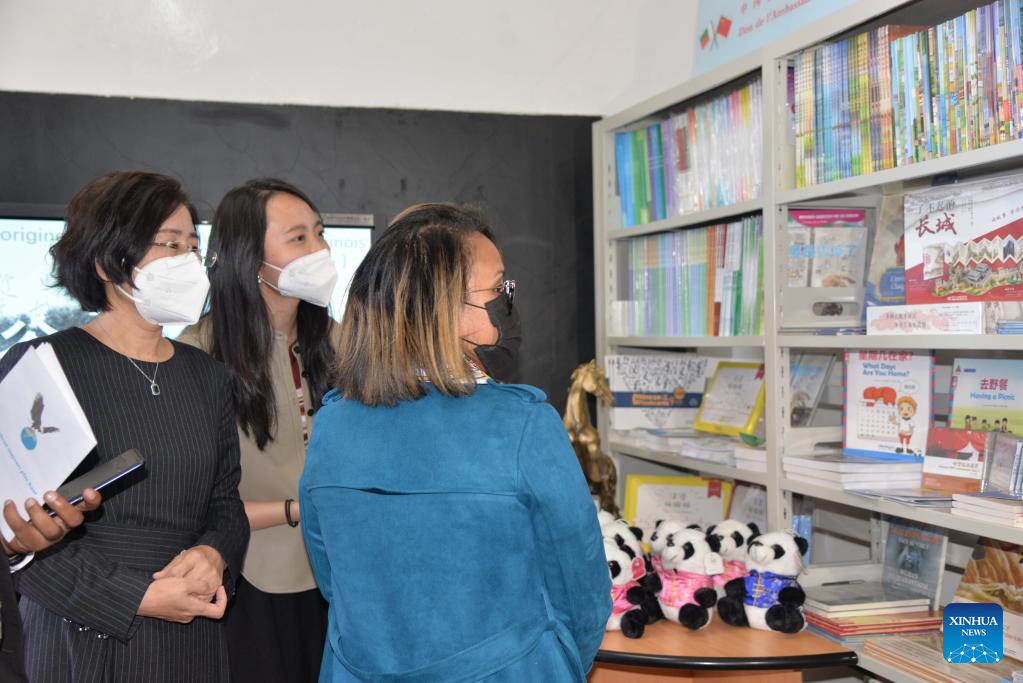 Chinese Ambassador to Madagascar Guo Xiaomei (L) and other guests are seen during the inauguration ceremony of a reading room at the school Le Petit Nid in Antananarivo, Madagascar, on May 5, 2022. The Chinese government on Thursday donated nearly 3,000 books in Chinese and bilingual Chinese-French to the Malagasy school. (Xinhua/Sitraka Rajaonarison)

ANTANANARIVO, May 5 (Xinhua) -- The Chinese government on Thursday donated nearly 3,000 books in Chinese and bilingual Chinese-French to a Malagasy school.

"China is delighted to donate 3,000 books in Chinese language and bilingual Chinese-French for this reading room," said Guo Xiaomei, Chinese Ambassador to Madagascar, during the inauguration ceremony of a reading room at the school Le Petit Nid in Antananarivo.

Guo said the donation included books for children with contents covering the four great Chinese classics, as well as the Chinese culture and China's traditional customs.

"I am confident that these books will provide a window into China for the school's young friends," Guo said, adding that she hopes the young Malagasy will enjoy reading, gain new knowledge, and extend their vision in this reading room.

Ratsimisetra Felambohangy, the Secretary General of the Malagasy Ministry of National Education, said that books, whether in physical or electronic form, represent one of the preferred tools of knowledge.

"We are confident that, owing to your help, the educational tools available to the children of Le Petit Nid school will allow them to open other windows, especially that of China," she added.

"Learning languages is about exchanging words and culture," she said.

Established in 1987, Le Petit Nid school contains pre-school, primary, secondary and high school education. Chinese language classes have been taught at the school since 2013, while the Confucius Class opened at the school in 2017.