China doubles down on expanding domestic demand to bolster growth

People camp at a scenic area in Wuyi County of east China's Zhejiang Province, May 2, 2022. (Photo by Zhang Jiancheng/Xinhua)

BEIJING, May 15 (Xinhua) -- Facing downward pressure and increasing uncertainties, China has stepped up efforts to invigorate domestic demand and rev up the growth engine of the world's second-largest economy.

Domestic demand has served as a main driver of the Chinese economy. Official data showed China's fixed-asset investment jumped 9.3 percent year on year in the January-March period, up from 4.9 percent for the whole year of 2021. Final consumption contributed nearly 70 percent of GDP growth during the same period.

Yet, in March alone, the country's retail sales fell, while fixed-asset investment growth slowed significantly compared to the first two months of the year. A mix of factors, such as the flare-ups of COVID-19, had weighed heavily on consumer and business demand during the period.

"One of the prominent pressures facing us is shrinking demand," said Zhang Liqun, a researcher of the Development Research Center of the State Council, highlighting the need to expand domestic demand and facilitate the balance of supply and demand.

Zhang called for leveraging the vital role of investment in expanding demand, especially government-led infrastructure investments, as such investments will generate more orders for enterprises and boost hiring and wages.

From last year's Central Economic Work Conference, to this year's government work report and the meeting of the Central Committee for Financial and Economic Affairs last month, advancing infrastructure investment has become a key issue for Chinese policymakers.

The construction of 102 major projects for the 14th Five-Year Plan period (2021-2025) has been accelerated. Efforts to boost new types of infrastructure will also be enhanced as the country vowed to build 600,000 5G base stations in 2022.

By the end of March, the issuance of special-purpose bonds for local governments totaled around 1.25 trillion yuan (about 186 billion U.S. dollars). Much of the funds were channeled into infrastructure construction such as the development of industrial parks, transport, water conservancy facilities and cold-chain logistics.

Measures have also been put in place to further boost consumption, another pivotal pillar for domestic demand.

China plans to build a batch of warehouses in the suburbs of large and medium-sized cities to ensure the supply of daily necessities in case of emergencies, according to guidelines unveiled in April on tapping the country's consumption potential and promoting consumption recovery.

Efforts will also be made to develop products and services that cater to the needs of the elderly and infants, promote the sales of automobiles and home appliances in rural areas and build several duty-free shops within cities, among other moves, the guidelines said.

Though some contact-based sectors were affected by COVID-19, new bright spots continued to pop up in China's consumer market.

For instance, camping emerged as a new trend among Chinese young people, driving up demand for accommodation and camping gear.

According to China's online travel agency Ctrip, hotels and B&Bs with the tag "camping" in their introduction saw orders soar 153 percent during the Labor Day holiday, when compared with the three-day Tomb-sweeping Day holiday in early April.

Consumption is resilient with huge potential in China and the fundamentals for consumption expansion stay positive, Sheng Qiuping, vice minister of commerce, told Xinhua in a recent interview. 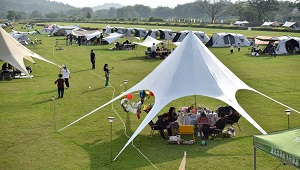