The closed club is faced with internal differences that are hard to iron out and a Cold War mentality that goes against the trend of the times.

Earlier, officials from Germany and Britain were reported to push for temporary waivers on biofuels mandates to mitigate soaring food prices. However, Germany had to drop the thought during the summit due to reported resistance from the United States and Canada.

A day before the opening of the G7 summit, protesters took to the street to voice opposition to the G7's approach to global issues.

ELMAU, Germany, June 27 (Xinhua) -- A series of major Western diplomatic gatherings began with the Group of Seven (G7) leaders' meeting in the German mountain resort of Schloss Elmau on Sunday, while thousands of protesters marched in Munich.

Leaders who are attending the three-day G7 summit and those who will show up at the upcoming 2022 NATO summit in Spain are trying to present a show of unity on the Ukraine crisis. Yet the reality is that the closed club is faced with internal differences that are hard to iron out and a Cold War mentality that goes against the trend of the times.

Before the start of the G7 meeting on Sunday, German Federal Chancellor Olaf Scholz, who holds the G7's rotating presidency and is hosting the gathering, met with U.S. President Joe Biden and the two leaders underlined "the unity of the West."

"The G7 nations must continue to close ranks," Scholz said. 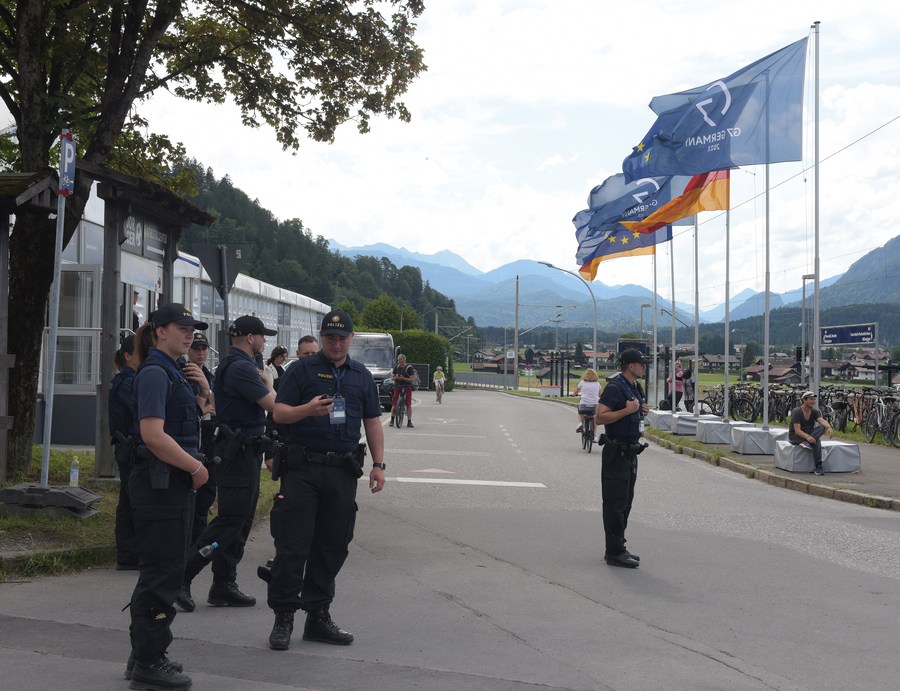 Police patrol outside the international media centre during the Group of Seven (G7) summit in Garmisch-Partenkirchen, Germany, June 26, 2022. (Xinhua/Guo Chen)

In a statement issued on Sunday afternoon after having discussions with other leaders, Scholz mentioned global difficulties, including declining growth rates, rising inflation, shortages of raw materials and supply chain disruptions.

Earlier, officials from Germany and Britain were reported to push for temporary waivers on biofuels mandates to mitigate soaring food prices. However, Germany had to drop the thought during the summit due to reported resistance from the United States and Canada.

Apart from the food crisis, the dispute over climate actions also grabbed headlines.

A 40-page communique, released in May after G7 climate, energy and environment ministers met in Berlin, said the G7 agreed to achieve "predominantly decarbonized electricity sectors" by 2035. However, the ministers failed to set a date for phasing out coal-powered energy due to objections from the United States and Japan.

The substantial effort to reduce carbon emissions remains a highlighted difficulty for G7 leaders at the summit, as the world's major industrialized economies, which are primarily responsible for the pollution warming the planet, continue to clash on coal.

At the beginning of this year, Germany listed several priorities for the G7 summit, such as striving for a sustainable planet, economic stability and healthy living. Now, the Russian-Ukraine conflict has moved to the top of the summit's agenda.

Before the summit, Scholz said that G7 leaders would highlight their support for Ukraine "for as long as necessary." Biden tweeted that the G7 would ban Russian gold imports, "a major export that rakes in tens of billions of dollars for Russia."

The group has already targeted key Russian energy exports such as crude oil, while the economic reverberations have taken a toll on resource-thirsty European countries, causing rising inflation and soaring energy prices. 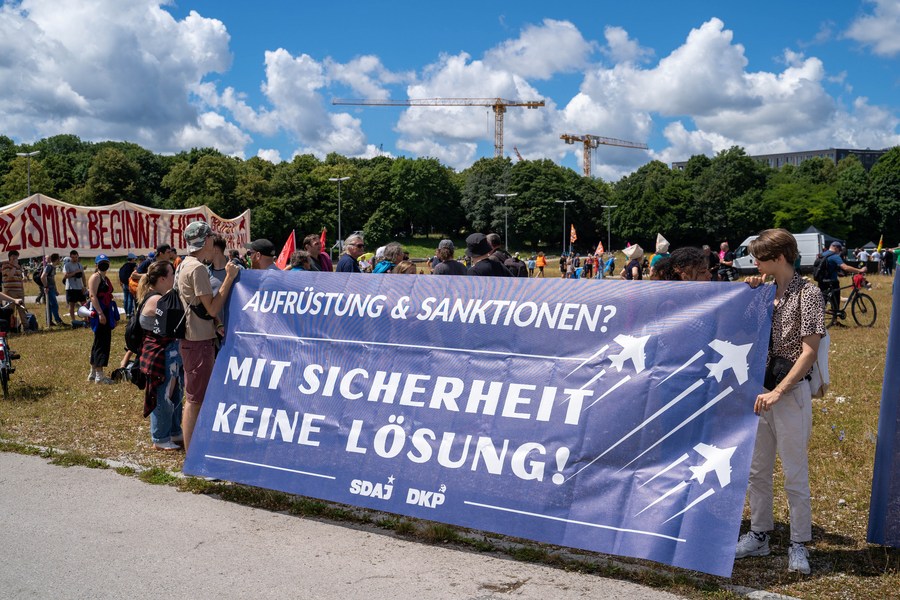 People take part in a demonstration to protest against Group of Seven (G7) summit in Munich, Germany, on June 25, 2022. (Xinhua/Ren Ke)

The G7 summit invited leaders from Argentina, India, Indonesia, Senegal and South Africa, five countries that have been reluctant to follow Western sanctions on Russia.

Introducing sanctions against Russia will not lead to peace, and Argentina will not follow this course of action, Argentine Foreign Minister Santiago Cafiero said in April.

Indonesian President Joko Widodo also has called for a cease-fire in Ukraine and a continued dialogue between Moscow and the West rather than economic sanctions to resolve the crisis.

The disputes won't end in Madrid this week for NATO members, as Turkey's concerns have added uncertainties to Finland's and Sweden's pursuit of NATO membership, exposing deeper fissures within the military bloc.

"After all, a swift membership of Sweden and Finland to NATO could only exacerbate the Russian-Ukraine crisis. It would mean to pour fuel on the fire," Tarik Oguzlu, a professor in international relations at Istanbul's Aydin University, told Xinhua.

A day before the opening of the G7 summit, protesters took to the street to voice opposition to the G7's approach to global issues.

On Saturday, around 4,000 people gathered in Theresienwiese, Munich, the capital of Bavaria, 100 km away from the G7 gathering.

Holding posters reading "No to imperialism" and "Distorted justice," protesters urged the G7 to shoulder their due responsibilities and consider the interests of developing countries. 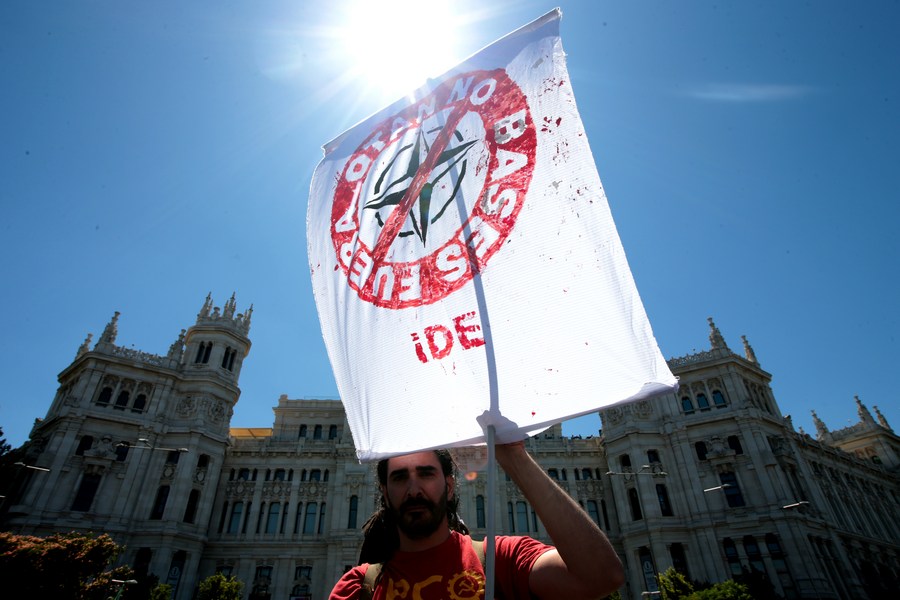 A man takes part in a protest against NATO in Madrid, Spain, June 26, 2022. (Photo by Juan Carlos Rojas/Xinhua)

Lisa Gaetner, a local resident, told Xinhua on Saturday that she joined the demonstration to urge the G7 to reduce military spending and increase efforts to combat climate change.

"We have to bond all our efforts together for environmental problems and climate change, instead of being against each other," said Doris, another resident.

During the summit, hundreds of people joined another protest in the southern German town of Garmisch-Partenkirchen. Protesters also set up tents in the town to express their dissatisfaction.

Days ahead of the summit, eight German riot police vehicles were set on fire in Munich.

About 18,000 police officers were on a mission to maintain order during the meeting in Bavaria. Police from neighboring regions also helped with security. 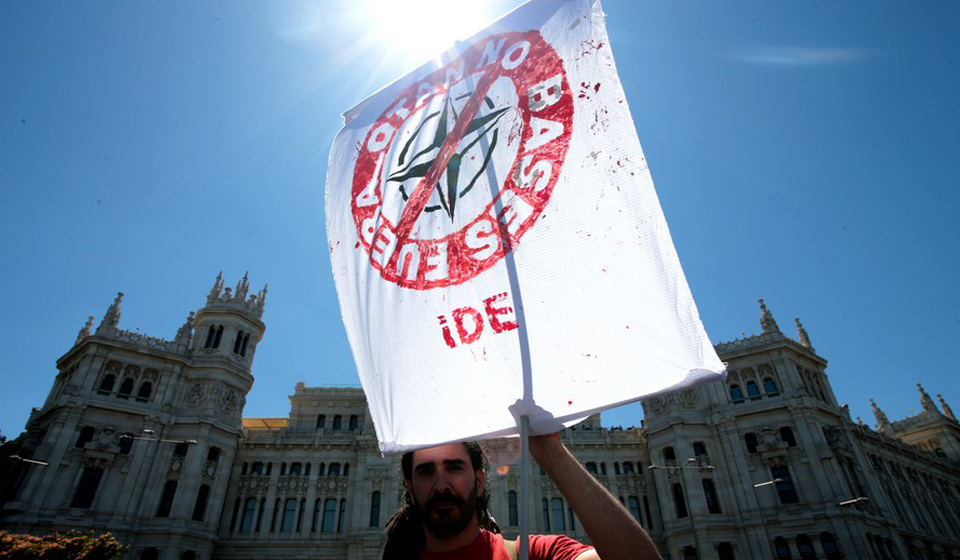