China's burgeoning digital economy has not only revolutionized the lives of urbanites with emerging technologies but also transformed the country's rural areas.

Southwest China's Guizhou, once the provincial-level region with the largest poor population in the country, has become the country's major big data hub in just a decade.

GUIYANG, Aug. 2 (Xinhua) -- China's burgeoning digital economy has not only revolutionized the lives of urbanites with emerging technologies but also transformed the country's rural areas.

Southwest China's Guizhou Province was home to 9.23 million registered impoverished residents in 2012, making it the provincial-level region with the largest poor population in the country. That's, however, a thing of the past. The province has eliminated absolute poverty and become the country's major big data hub in just a decade. 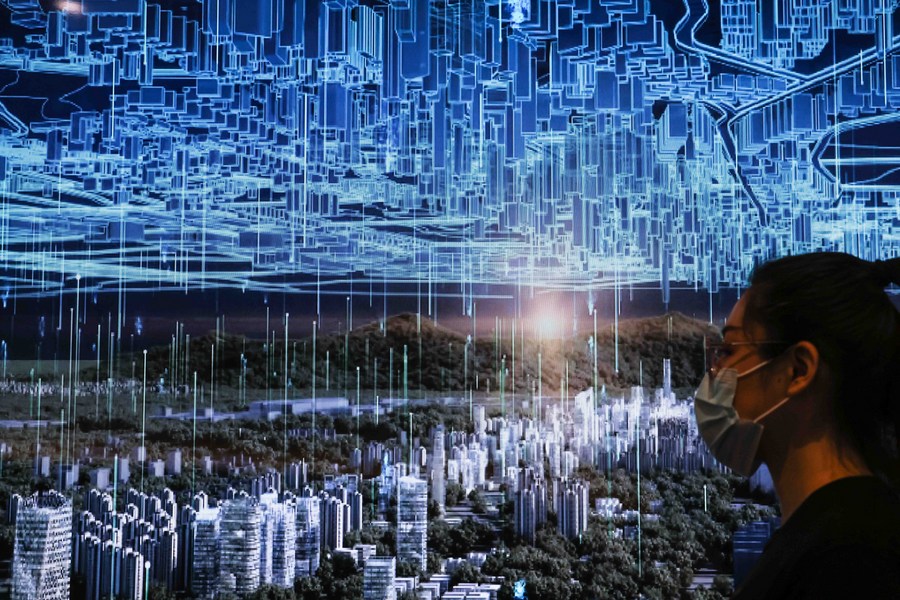 A staff member watches a big-data animation on an LED screen at the exhibition center of the national big data comprehensive pilot zone in southwest China's Guizhou Province, May 26, 2022. (Xinhua/Ou Dongqu)

An increasing number of big data and other technological projects have boosted Guizhou's digital economy. According to a development report on China's digital economy released in early July, the value-added output of the digital economy in Guizhou increased by 20.6 percent year on year in 2021, and the growth rate was 4.4 percentage points higher than the national average, ranking first in the country for seven consecutive years.

At a plantation base, established in 2018, in Tunshang Village of Pu'an County, an LED display screen installed outdoors shows the temperature, humidity and soil condition.

The growth of the tea is tracked in real time by dozens of digital devices installed at the base, offering data support for scientific management and protection of the tea garden.

Yu Dan, who is in charge of this tea plantation project, said that the 6 million white tea seedlings at the base were donated by 20 Party members in Anji, a well-known county in Zhejiang Province for white tea production. Today, the tea garden is not only boosting the income of the locals but also continuously improving the yield and quality of white tea through big data. 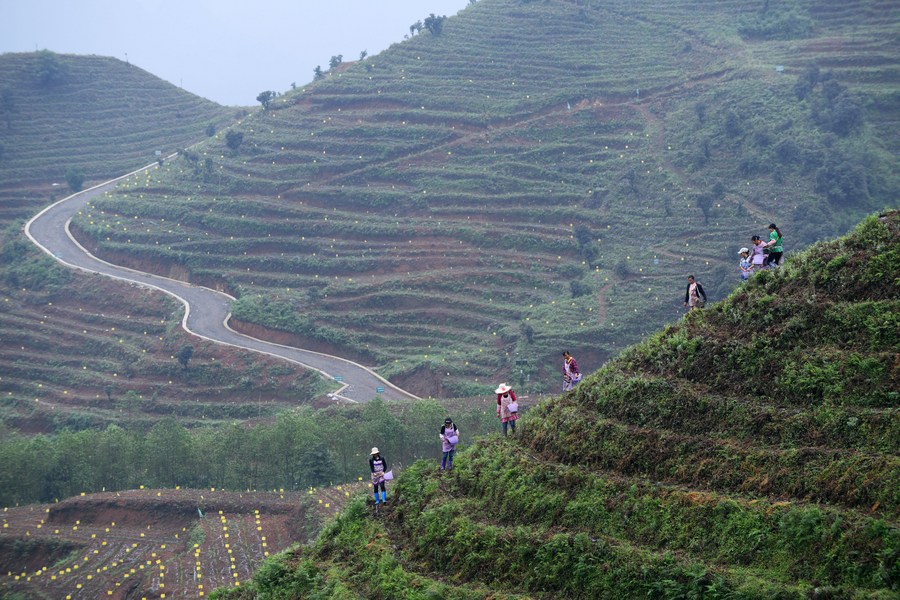 According to the provincial statistics bureau, the output value of big data and electronic information industry of Guizhou grew 22.8 percent year on year in the first half of this year.

With the big data industry taking root in Guizhou, digital applications are becoming increasingly popular, and digital management through intelligent apps has become a trend in rural areas.

Fei Rufen received several early warning messages on a mobile app in a short time, reminding him that 70 sows in the pigsty had abnormally high body temperatures.

The ear tag of each pig collects the body temperature and movement data of the animal 24 hours a day and uploads them to the app. If the pig's body temperature exceeds 39 degrees Celsius, or the movement remains stationary for a long time, the app will transmit early warnings to farmers and red light on the ear tag lights up.

"In the past, when pigs were found to be sick, symptoms such as anorexia and diarrhea were often observed, but the best treatment period was missed. Now, the big data system has helped us improve the survival rates of pigs to over 96 percent," Fei said.

There is a great deal of logistics equipment moving back and forth in this factory, said Han Hongchuan, head of the company's information technology department, adding that these AGVs are the company's focus of technological transformation, which greatly improves the stability of the on-site network, ensures the smooth transfer of components, and reduces operation and maintenance costs by some 30 percent.

Liu Da, an expert with China Unicom's Guizhou branch, said that the core equipment and storage system of 5G are placed in a data center. 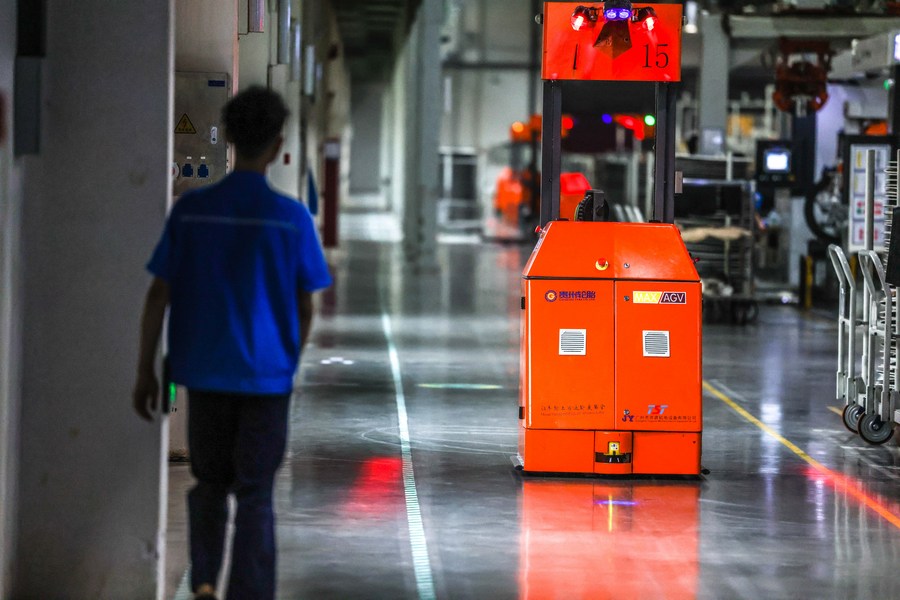 A "neural network" has been created through digital technology, and a large number of high-quality data are stably transmitted and analyzed in the data center, which can provide strong support for the process optimization and change in the factory, Liu added.

Suitable climate, sufficient power and stable geological conditions have made it possible for Guizhou to take the lead in starting new digital infrastructure construction.

At a health center in the midst of mountains in Wantanhe Township, Longli County, a young doctor Zhao Long examined a patient with severe abdominal pain and nausea symptoms. Noticing the complexity of the illness, he immediately used the remote consultation system in the consulting room to relay the patient's conditions to the doctors in the county seat via video link.

Zhao had less than two years of work experience. While listening to the analysis of the patient's illness, he asked the experienced doctors questions. Doctors at the Longli people's hospital answered them one by one from the other side of the screen.

Remote medicine has improved medical service in faraway areas, and locals can consult an expert doctor in the village without any hassle.

Luo Feng, head of Wantanhe's central health center, said that in the past, patients whose diseases could not be treated in the township had to travel to the county seat, but now there's a convenient access to better healthcare.

"By speaking with experts, I have gained a lot of professional knowledge, and patients' trust in us and their willingness to visit the village clinic for checkups have increased," said Chen Li, a doctor at the local clinic in Tuanjie Village of Longshan. 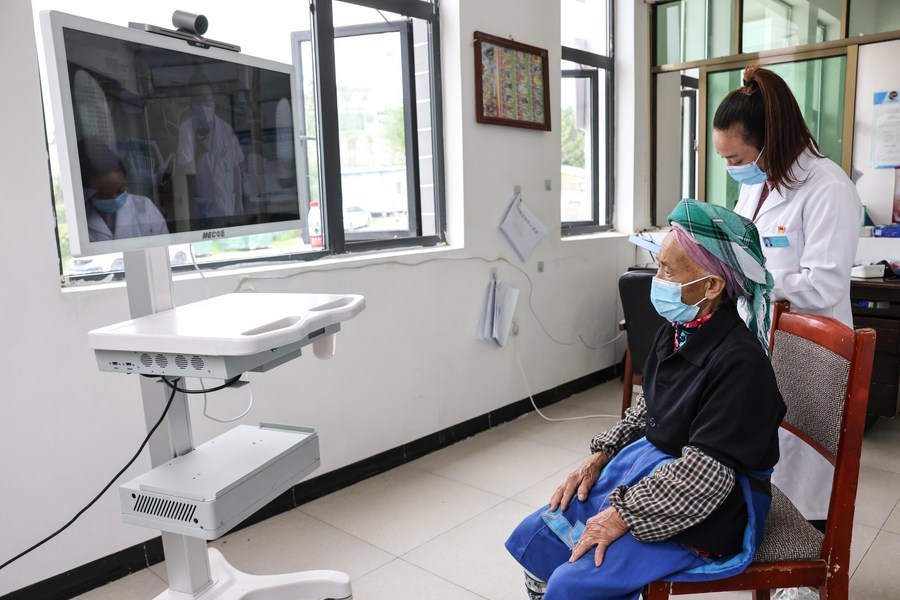 According to the 14th Five-Year (2021-2025) Plan of Guizhou, the total output value of big data and electronic information industry in the province is expected to exceed 350 billion yuan (about 52 billion U.S. dollars) by 2025.

The "digital village" is becoming a reality, with a gradual change in the traditional production and lifestyle, helping to narrow the gap between urban and rural areas, said Zhang Ke, deputy director of the big data policy and legal innovation research center of Guizhou Academy of Social Sciences. 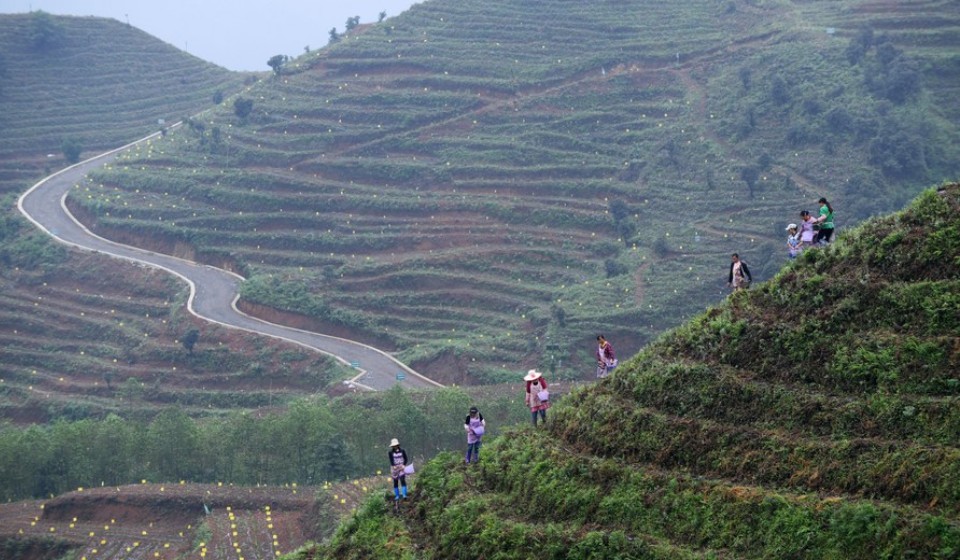