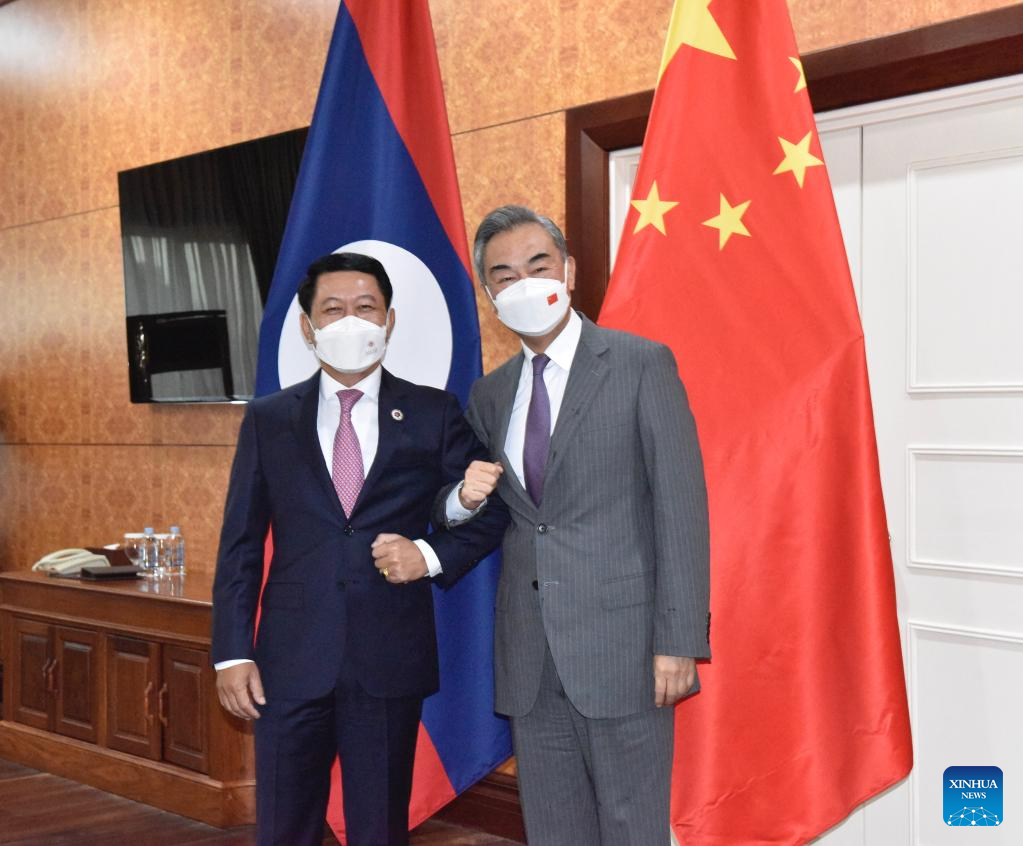 During talks with Saleumxay on the sidelines of meetings of foreign ministers on East Asia cooperation, Wang lauded the strong momentum of development of China-Laos relations, the continuously consolidated strategic mutual trust and the fruitful results of practical cooperation between the two countries.

Wang noted that the opening of the China-Laos Railway in December last year elevated bilateral exchanges and cooperation to a new level, and injected new impetus into the construction of the China-Laos Economic Corridor.

Both sides should deepen strategic communication and coordination so as to further build an unbreakable China-Laos community with a shared future, he said, adding that both sides should enhance the exchanges of experience in party and state governance, jointly improve governance capability and promote their national development and socialist causes.

For his part, Saleumxay thanked China for its long-standing support and assistance to Laos' economic and social development, saying the two countries have worked together to overcome the challenges of the COVID-19 pandemic and achieved remarkable results in practical cooperation, which demonstrates the true nature of bilateral relations that shares weal and woe.

Laos attaches great importance to learning from China's experience in state governance and looks forward to strengthening bilateral cooperation in various fields and building well the Laos-China community with a shared future, he added.

Saleumxay said that the recent provocative moves of the U.S. side on the Taiwan question broke its own commitments, violated the basic norms governing international relations, and infringed upon China's sovereignty and territorial integrity.

The Lao Ministry of Foreign Affairs has immediately issued a statement, making it clear that the Lao side adheres to the one-China principle and reiterating that Taiwan is an inalienable part of China's territory, Saleumxay said.

Laos opposes any attempt to create "two Chinas" or "one China, one Taiwan," and will continue to stand firmly with China and support China in safeguarding its sovereignty and territorial integrity, he noted.

Wang stressed that the United States, for its self-serving interests, has used every means without a bottom line, ignored basic norms governing international relations, and blatantly violated China's sovereignty, adding that the U.S. national credibility has gone bankrupt.

China will make firm and necessary responses to the U.S. retrogressive acts of "using Taiwan to contain China," he said, warning that any attempt by the "Taiwan independence" separatist forces "to look for U.S. support for their independence agenda" is doomed to fail, and will cause the greatest damage to the safety of the people in Taiwan.

Noting that mutual trust and mutual support are essential to the China-Laos community with a shared future, Wang said China appreciates Laos' just position, and will continue to strengthen solidarity with the Lao side, firmly support each other in safeguarding their legitimate rights and development space, as well as uphold international fairness and justice. ■