The U.S. Side's Act in Bad Faith on the Taiwan Question Will Only Further Bankrupt Its National Credibility

Wang Yi pointed out during an interview to reporters on Tuesday after attending the Shanghai Cooperation Organization foreign minister's meeting and visiting Central Asia that the one-China principle is the overwhelming consensus of the international community, the political foundation for China's relations with other countries, the core of China's core interests, and a red line and bottom line that cannot be crossed.

"Some people in the United States keep challenging China's sovereignty on the Taiwan question, hollowing out the one-China policy, and even deliberately creating trouble in the Taiwan Strait," he said, "The Chinese people will never accept such moves, and the international community will also sniff at such unwarranted provocation." 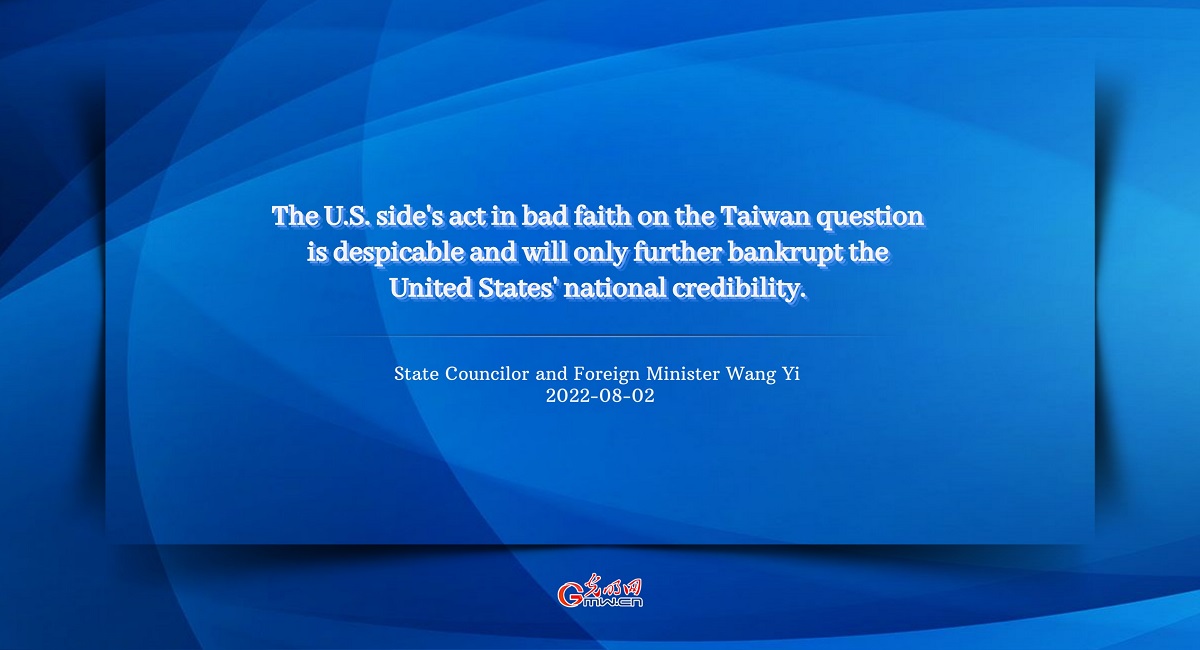 Wang Yi stressed that the U.S. side's act in bad faith on the Taiwan question is despicable and will only further bankrupt the United States' national credibility. Some U.S. politicians are flagrantly playing with fire on the Taiwan question for selfish gains and making themselves enemies of the 1.4 billion Chinese people. They will not come to a good end.

During another interview to reporters on Wednesday, Wang Yi slammed on Pelosi's visit to Taiwan as an "out-and-out farce". "The U.S. is playing the dirty tricks to encroach upon China’s sovereignty under the guise of 'democracy', and separatist forces for 'Taiwan independence' like Tsai Ing-wen are hanging on to the U.S. coattails, turning their back on the just cause of the Chinese nation," he said. 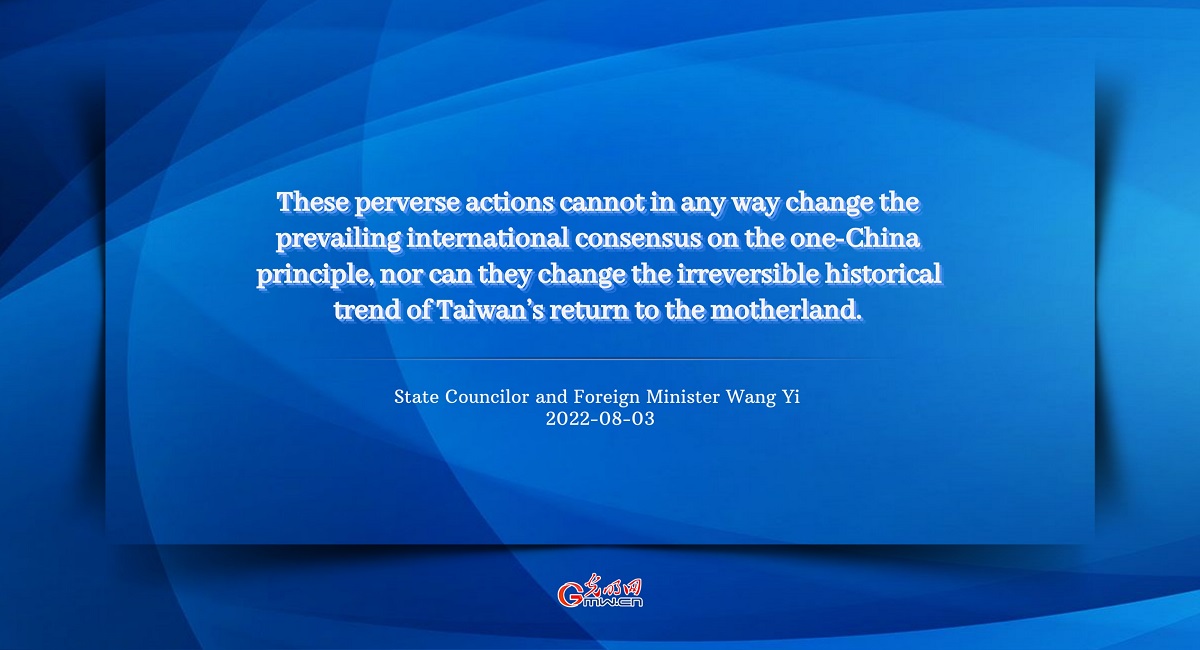 "However, these perverse actions cannot in any way change the prevailing international consensus on the one-China principle, nor can they change the irreversible historical trend of Taiwan’s return to the motherland," he stressed.

Wang Yi further elaborated on China's position on the U.S. side's provocative behavior in violation of China's sovereignty on Thursday. 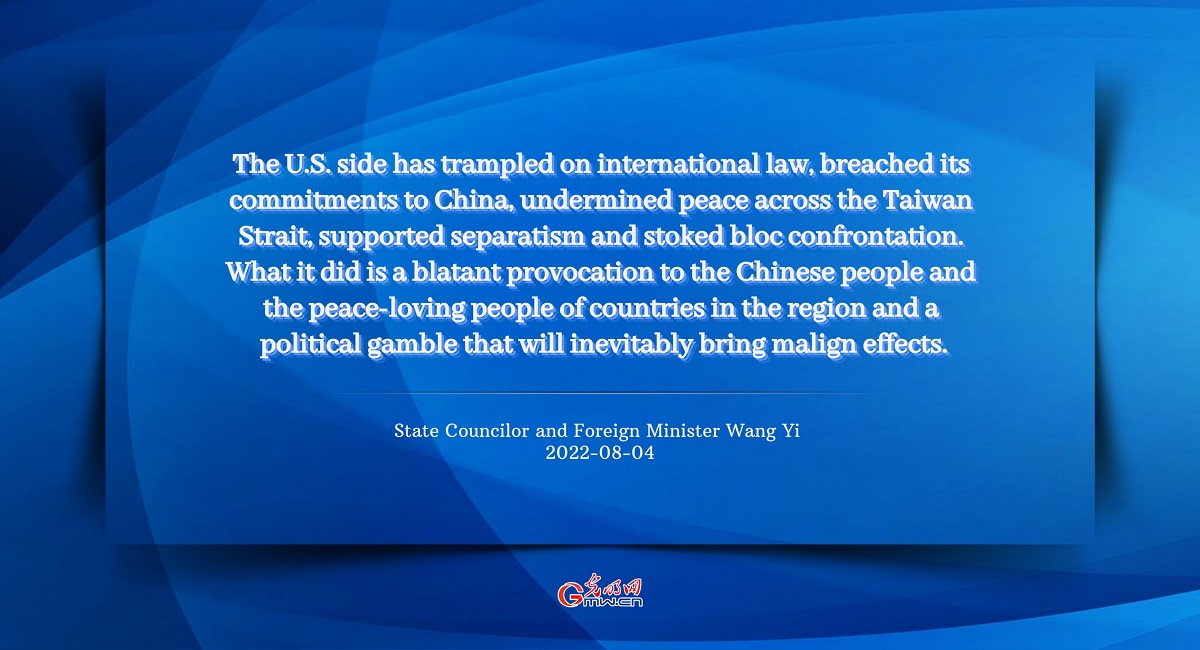 "The U.S. side has trampled on international law, breached its commitments to China, undermined peace across the Taiwan Strait, supported separatism and stoked bloc confrontation," Wang Yi said, "What it did is a blatant provocation to the Chinese people and the peace-loving people of countries in the region and a political gamble that will inevitably bring malign effects."

Wang Yi emphasized that the comprehensive measures taken by China now and in the future are necessary and timely counteractions for defense. 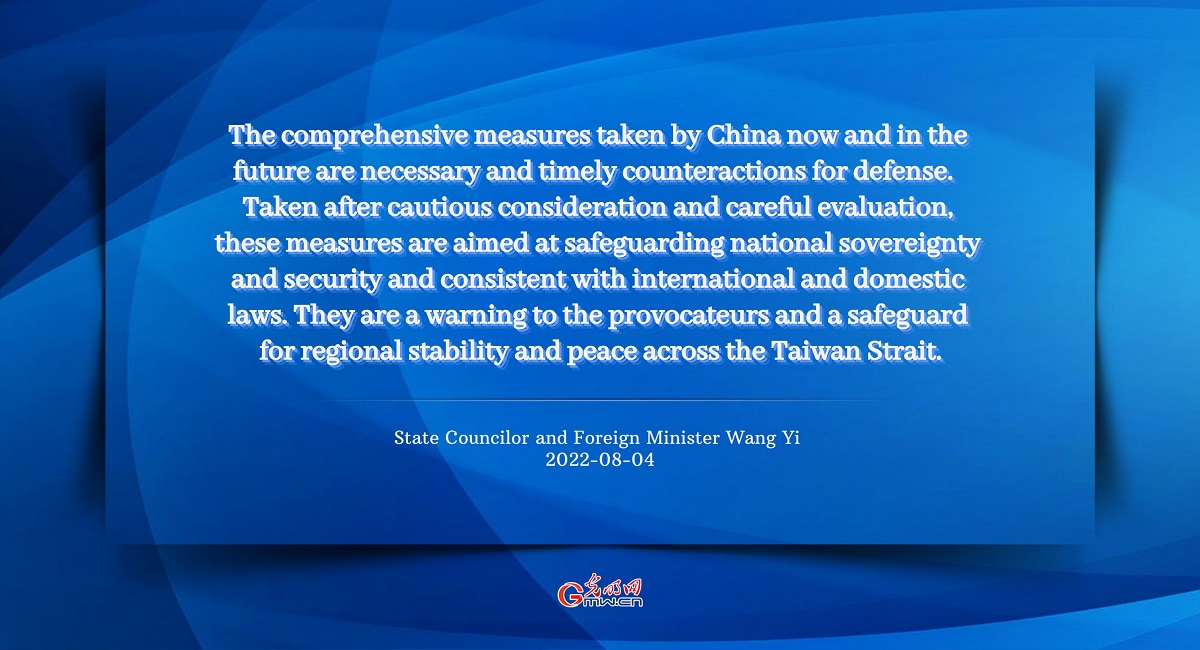 "Taken after cautious consideration and careful evaluation, these measures are aimed at safeguarding national sovereignty and security and consistent with international and domestic laws," he said, "They are a warning to the provocateurs and a safeguard for regional stability and peace across the Taiwan Strait."

Wang Yi also warned that all parties should clearly recognize the causes and essence of the current crisis, jointly oppose the U.S.’ adventurism and provocations, continue to support China's legitimate position and measures, and jointly safeguard peace in the region and across the Taiwan Strait.