US move on Taiwan threatens world 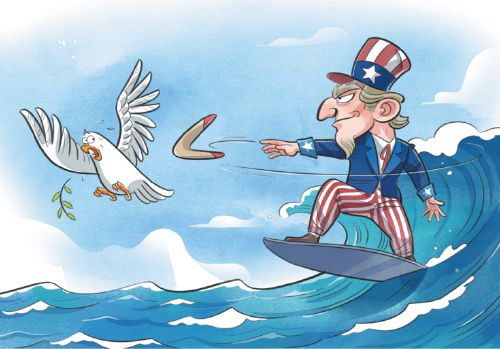 The international situation highlights the need for China and the United States to fulfill their due responsibilities and cooperate in different areas, so as to maintain global stability. The risks and challenges facing the international community have become more complicated, not least because the COVID-19 pandemic remains a threat to the health and lives of people around the globe.

Also, the global impact of the protracted Russia-Ukraine conflict is being increasingly felt across the world. The disruptions in global supply chains and adjustments to industry chains have dealt a heavy blow to systems and normal operations around the globe. And the energy and food crises, and financial risks are intensifying in some countries.

Against such a backdrop, the global connotations of China-US relations have become even more important, so there is an urgent need to put China-US ties back on the normal track. For that, however, the two countries need to maintain regular communication and exchanges; in fact, they need to increase the frequency of candid, in-depth communication, both on bilateral and major international issues.

Indeed, communication between the two sides in different fields and at different levels have increased of late, which is good news for the world at large. But the two sides also need to shoulder their due major-country responsibilities and play their respective role as a global stabilizer.

An important premise to this is that the US needs to see China in an objective, rational manner. The last two US administrations have viewed and defined Sino-US relations from the perspective of strategic competition, continuously hyped the so-called China threat theory, and recklessly tried to contain and suppress China in various ways.

The US government's outlook on China has led to misjudgment of China's development goals and misreading of China's intentions. It has also misled the international community regarding China's initiatives and regional and global development projects. That's why Sino-US relations have deteriorated dramatically and the scope for the two countries to work together to resolve global issues has shrunk. China has pointed out the US' strategic mistakes many a time but to no avail.

So it's time the US side faithfully implemented the consensuses the two countries' leaders have reached over the years and US strategic circles developed an objective, rational outlook on China. As for the Joe Biden administration, it needs to address the domestic political and economic issues and drive some sense into the anti-China forces in the US. This is the only way China and the US can cooperate to boost their economies, sustain global growth and stave off risks of turbulence and recession.

The Taiwan question will be an important test for the US, because it is the most sensitive issue in Sino-US relations and the foundation on which bilateral ties are based. But the US has been frequently playing the Taiwan card and gradually upgrading exchanges with Taiwan at various levels and in various fields, undermining the political foundation of Sino-US ties.

Biden, on his part, did assert that the US has not changed its one-China policy and doesn't support Taiwan independence. But the US side has been saying one thing and doing just the opposite, as evident from its anti-China rhetoric and actions, especially US House of Representatives Speaker Nancy Pelosi's stopover in Taiwan on Aug 2 on her way to the Republic of Korea.

Therefore, the US needs to honor its pledges, match its words with deeds and correct its mistakes.

In the years since the People's Republic of China and the US established diplomatic relations in 1979, all US administrations, both the Democratic and Republican parties and all political forces have been fully aware of the sensitivity of the Taiwan question. Even after that, if the US side keeps playing the Taiwan card, it will fundamentally damage Sino-US ties.

To consolidate the political foundation of Sino-US ties, bilateral interactions have increased lately, albeit at a slow pace, gradually creating an atmosphere for the two sides to cooperate on common issues and maintain world stability.

Given the increasingly gloomy world economic outlook, the two sides should maintain close communication and coordinate their macroeconomic policies, taking inspiration from the Sino-US policy coordination during the 2008 financial crisis which helped the global economy deal with many financial and economic challenges.

Facing the challenges created by the global energy and food crises, China and the US need to strengthen collaboration through bilateral cooperation networks or multilateral platforms such as the United Nations and G20. For instance, the two sides can collaborate on projects to clear the bottlenecks of the international supply chains and provide assistance to countries suffering from shortages of grain, oil and gas, thus clearing the way to deeper cooperation in different fields, thereby boosting bilateral ties.