Why a U.S. obsession with meddling in other countries seriously jeopardizes world peace

* From the end of World War II to 2001, the United States has initiated 201 armed conflicts in 153 locations, accounting for more than 80 percent of the total wars that occurred across the world in that time.

* Outright military aggression is not the only tool of U.S. control. It has also resorted to economic seduction, financial sanctions, cultural infiltration, incitements to riot, election manipulation and other ruses to covertly subvert so-called "ideologically hostile countries."

* The consequences have extended beyond the human losses, economic collapses and social turmoil of targeted states to shatter regional and global stability.

Jervis' words were written 23 years ago and remain valid today. They get to the heart of U.S. foreign policy, one that features meddling in the internal affairs of other countries and subverting their governance, with the ultimate aim of securing American hegemony.

Such an interventionist foreign policy has prompted scenes of woe and horror worldwide and seriously jeopardized global peace and stability. 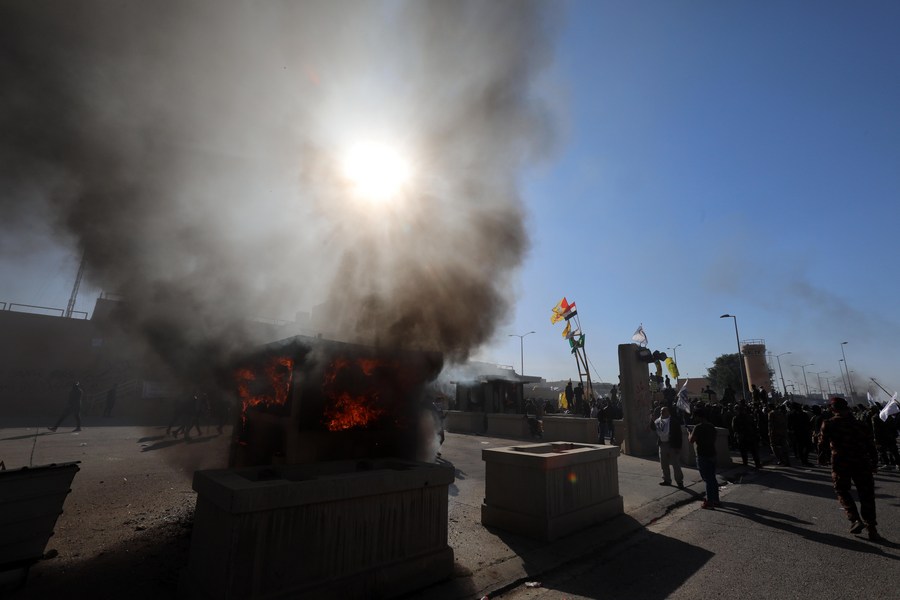 Protesters gather in front of the U.S. embassy in Baghdad, Iraq on Dec. 31, 2019 to condemn airstrikes by the U.S. forces against Hashd Shaabi bases in Iraq. (Xinhua/Khalil Dawood)

In the spring of 1805, U.S. army officer and diplomatic consul William Eaton, in alliance with Hamet Karamanli, the deposed brother of Yusuf Karamanli, Pasha of Tripolitania, or today's Libya, marched an army to attack Derna. They easily captured the Tripolitanian city with the help of three U.S. ships, and the Pasha was forced to capitulate.

The incident, which led to the end of the First Barbary War and a victorious United States, has been viewed by many scholars as the first U.S. attempt at a coup d'etat in a foreign government through military interventionism, triggering the country's consequent pursuit of global domination.

Since then, the United States has launched more bloody overseas military intrusions, often swooping in on a country and launching deadly attacks until the target is thrown into chaos and its government overthrown.

From the end of World War II to 2001, the United States has initiated 201 armed conflicts in 153 locations, accounting for more than 80 percent of the total wars that occurred across the world in that time. Since 2001, Washington and its allies have dropped an estimated average of 46 bombs on other countries daily.

Those wars, mainly in the name of "democracy," "freedom" and "human rights" were instead a reckless interference in the domestic affairs of other countries, leaving behind death and destruction in the Middle East, Latin America and Eastern Europe.

For example, U.S.-led NATO forces carried out continuous airstrikes for 78 days against Yugoslavia. The result? More than 8,000 civilians dead or injured and nearly 1 million displaced.

The U.S.-launched war in Afghanistan killed around 50,000 Afghan civilians from 2001 to mid-April 2020 and reduced some 11 million to refugees. Furthermore, years of bloodshed have left more than 200,000 Iraqi civilians dead and dragged Libya into greater turmoil.

The United States is "the most warlike nation in the history of the world," former U.S. President Jimmy Carter said in 2019, adding his country had only enjoyed 16 years of peace in its 242-year history.

The U.S. history of looting "is associated with numerous military interventions and the organizations of coups to eliminate those governments that did not easily accede to their demands," Gilberto Valdes Gutierrez of the Cuban Institute of Philosophy told Xinhua.

U.S. historian Paul L. Atwood has also summarized this bellicose nature of the United States: "War is the American way of life." 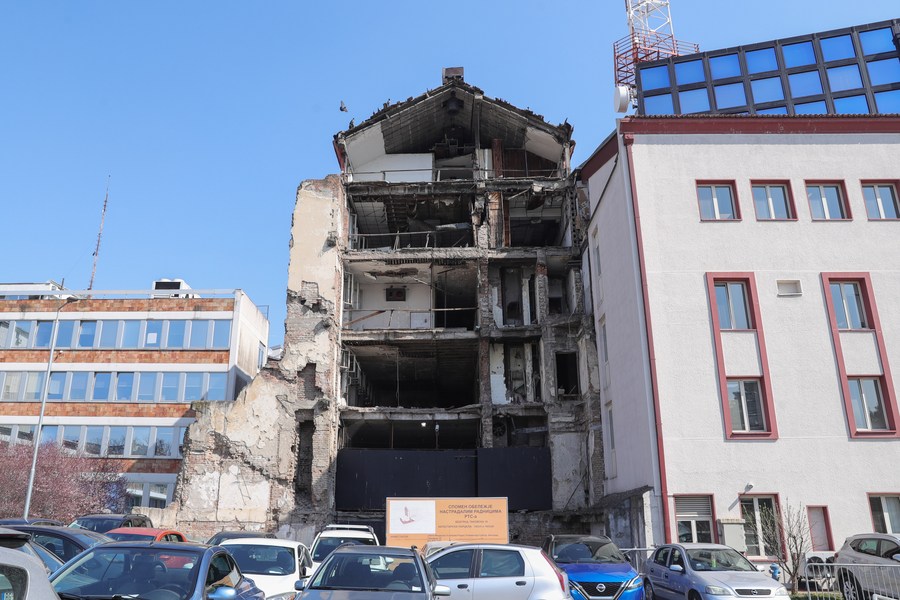 The bombed Radio Television Serbia (RTS) building is seen in Belgrade, Serbia, March 21, 2022. In Belgrade, there are many scars left by the NATO bombings. (Xinhua/Zheng Huansong)

Outright military aggression is not the only tool of U.S. control. It has also resorted to economic seduction, financial sanctions, cultural infiltration, incitements to riot, election manipulation and other ruses to covertly subvert so-called "ideologically hostile countries."

Those underhanded moves were admitted by former U.S. National Security Advisor John Bolton in a CNN interview in mid-July. "As somebody who has helped plan coup d'etat, not here but other places, it takes a lot of work," he said.

As the Boston College political scientist Lindsey O'Rourke wrote in her book "Covert Regime Change: America's Secret Cold War," from 1947 to 1989, the United States launched 64 covert operations of subversion in other countries.

Over the past few decades, the U.S. government has fostered political unrest in Latin America, played a part in the "Arab Spring" and instigated "Color Revolutions" in Europe and Asia. In Latin America, it continues to meddle in the domestic affairs of regional countries under the "Monroe Doctrine."

Washington's sanctions have increased tenfold in the past 20 years. It has long put Cuba, Venezuela, Libya, Iran, Iraq, Syria and others on its blacklist, wantonly disrupting their economies and damaging people's livelihoods, even amid the COVID-19 pandemic.

In an interview with USA Today in September 2020, political scientist Dov H. Levin noted that the United States has intervened in 81 elections between 1946 and 2000, including those in Yugoslavia and Italy.

The United States has financed non-governmental organizations "that essentially are there to destabilize countries," said Alfred de Zayas, professor of international law at the Geneva School of Diplomacy, who, as an American, feels "vicariously responsible" for the misdeeds of his country.

Photo taken on Sept. 2, 2021 shows damaged vehicles at the site of the U.S. airstrike in Kabul, capital of Afghanistan. (Photo by Saifurahman Safi/Xinhua)

"A modern form of 'Western arrogance" is how Greg Cusack, former member of the Iowa House of Representatives, described his country's foreign policy in an interview with Xinhua.

He was right: From the beginning of its founding, the United States has formed a culture of piracy that advocates pillage and conquest. Later, as triumphalism reared its head in the West following the end of the Cold War, the United States, the world's sole superpower, saw a rare opportunity to reshape the globe as it saw fit and rule supreme.

But its "unipolar moment" was short-lived. As the world shifts towards a multipolar one, the United States fears its global supremacy is weakening and has therefore started tightening its grip.

"Washington's empire" is "built on foundations of greed and lust for power," writer and political commentator John Wight wrote in an opinion published in July.

Its "imperial arrogance" is the same as that accompanying any empire, "established in the name not of peace and prosperity, but of war and exploitation," Wight wrote, adding the United States "seeks to dominate" and "has a policy of interfering in other states' internal affairs."

Indeed, the United States has long undermined international rules, coerced others to pick sides and retaliated against those who refused to comply. The consequences have extended beyond the human losses, economic collapses and social turmoil of targeted states to shatter regional and global stability.

And to justify its interventionist policy, the United States has masqueraded its misdeeds as "just war theory" and so-called "democratic experiments."

Daniel Kovalik, an American expert on international human rights from the University of Pittsburgh, told Xinhua that the United States uses human rights as a "bludgeon" against targets.

It has nothing to do with human rights, he said. "It's about U.S. economic and strategic interests."

"The discourse about democracy is the U.S. tool of pressure on countries ... Every region they invaded was completely destroyed both physically and spiritually as they set neighbors against one another," said veteran Turkish journalist Tunc Akkoc.

As an op-ed published last year in the South China Morning Post read, the United States "delivers all the consequences that a hegemon can inflict upon non-compliant states."

The "different experiences of U.S. interventions" over the past decades "were not in favor of the peoples," Egyptian political expert Akram Hossam told Xinhua. 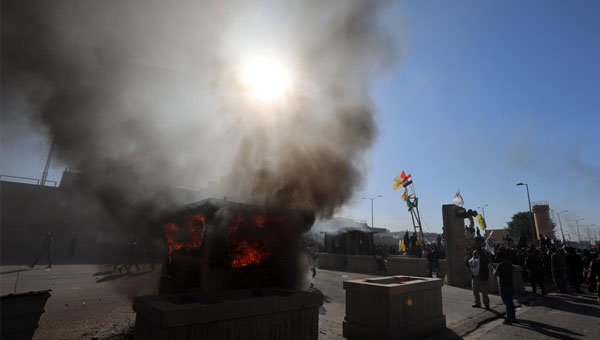