Children walk on a widened and reconstructed bituminous road at a village in Barguna, Bangladesh, on July 26, 2022. (Xinhua)

On the day the reconstruction was completed, villagers walked on the new asphalt road and gave a big thumbs-up. They took pictures and posted them on social media to share the happiness with friends.

"PowerChina is a responsible Chinese enterprise. Thank you for repairing the road for us to solve the long-term obstacle to our travel," Rezbi-ul Kabir, chairman of the Taltali Upazila sub-district, told Xinhua.

The Taltali Upazila sub-district lies in the Barguna district of the country's southern Barisal Division, some 180 km south of Dhaka, a place where the Chinese company constructed a 350-megawatt power plant with its local partner.

"This is a road to prosperity for our village. From now on, it will be more convenient for us to sell agricultural products in the town," said Kabir.

He said the old road could only accommodate one car and it used to be muddy during the rainy season, making it difficult to drive and walk.

"The road condition was terrible in the past," said a villager named Abul Hussein. He said they used to raise money from every family to repair the road but it still returned to a terrible condition every time during the rainy season.

"After being informed of the demand of local people, PowerChina Barisal Electric Power Company Limited (BEPCL) took up its social responsibility for the locality by immediately sending engineering technicians to survey the site and actively communicating with the local government about the solution," said Shi Weiti, deputy director of the Engineering Technology Department of BEPCL.

The company allocated the money, scheduled the construction, and sent machinery and technical personnel to guide the construction. After more than two months of intense work, the dilapidated road has been replaced by a straight and flat new asphalt road, easing the transportation inconvenience, he said.

Local residents called the reconstructed road "the road to safety, prosperity, and happiness".

Village woman Sabita is running a tea stall by the road. She is happy because her business is growing after the reconstruction of the road. "Our store sells some snacks, drinks, and fruits. In the past, as the road was terrible, only some families nearby came to buy stuff here, and we had difficulty replenishing our stock," she said.

After the road got repaired, Sabita's store has gradually become busy with more people coming for shopping. She has set up a shed alongside the tea stall for villagers to rest and chat. As a result, she said her income has increased several times than before.

Sabita's husband Md. Shah-Jalal is a welder at the power plant. According to Sabita, her husband has been working at the plant for three years and is now the leader of a welder team, and they just moved into the brick house built by themselves six months ago.

She thanked PowerChina for helping them have better living conditions. "I want to send our children to study in China after they grow up," said Sabita who has two children at school.

"We're in the southernmost part of Bangladesh with inconvenient transportation. Our villagers used to live only by farming and fishing and many of them had no chance to see the outside world," Kabir said.

He said the power plant has not only provided a lot of jobs but also attracted many people to come to do business here. In its Belt and Road projects, PowerChina has always been adhering to localized operations, serving local people's livelihood, and deeply integrated into the local economic and social development of the country.

During the project construction, the PowerChina Barisal power plant cumulatively employed more than 5,000 local technical workers, conducted mentoring and apprenticeship skill training, and reserved and trained a large group of professional technical talents for the locality. 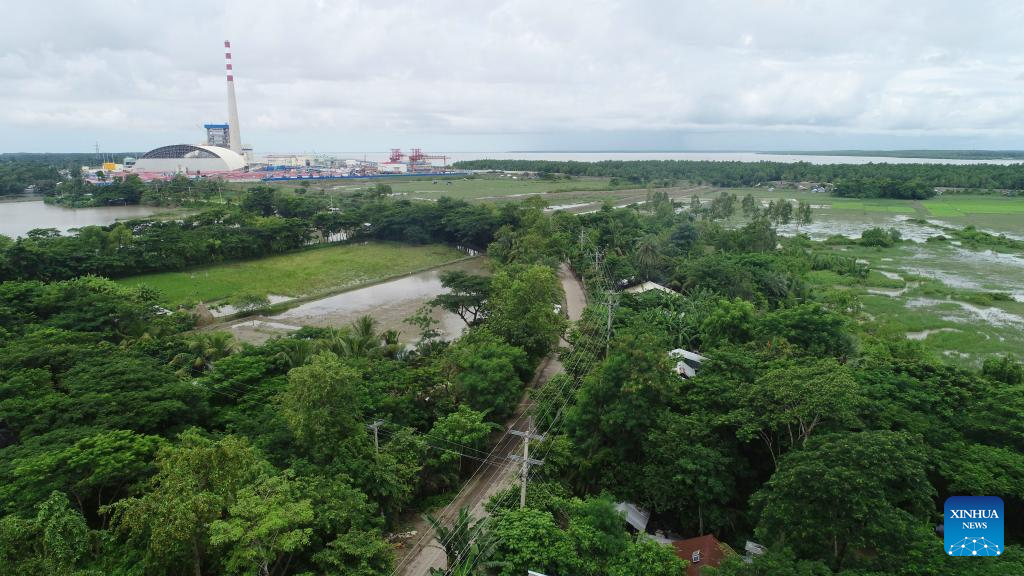 Photo taken on July 26, 2022 shows a widened and reconstructed bituminous road at a village in Barguna, Bangladesh. (Xinhua)