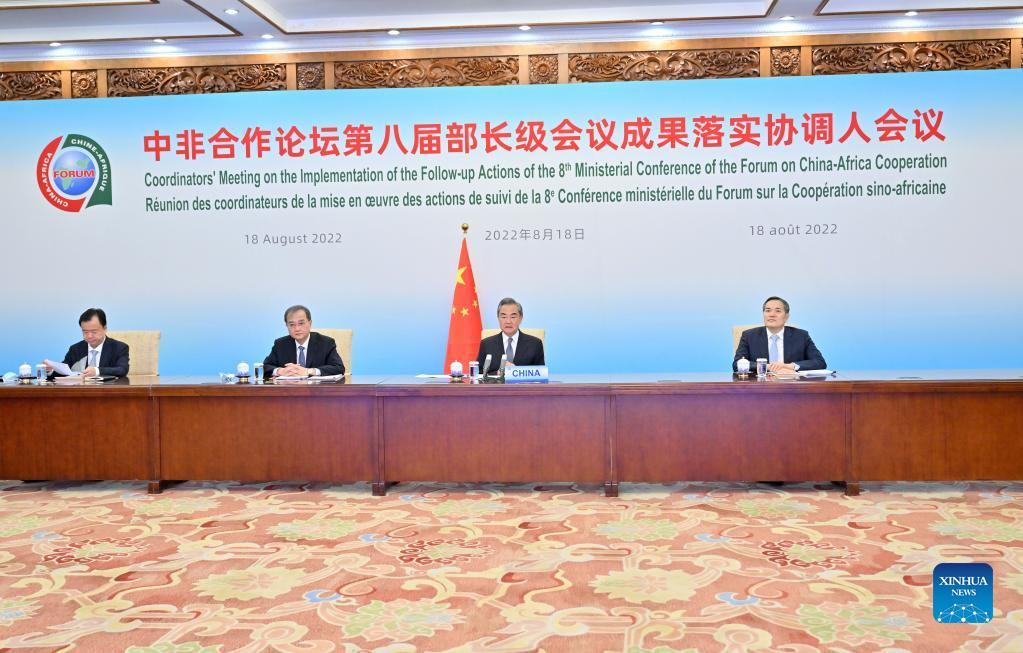 Chinese State Councilor and Foreign Minister Wang Yi chairs the coordinators' meeting on the implementation of the follow-up actions of the 8th Ministerial Conference of the Forum on China-Africa Cooperation (FOCAC) held in virtual format in Beijing, capital of China, Aug. 18, 2022. (Xinhua/Yue Yuewei)

BEIJING, Aug. 18 (Xinhua) -- Chinese State Councilor and Foreign Minister Wang Yi on Thursday made a proposal on building a China-Africa community with a shared future in the new era at a meeting reviewing the progress made in China-Africa cooperation.

In November last year, the 8th Ministerial Conference of the Forum on China-Africa Cooperation (FOCAC) was held in Dakar, Senegal, during which China announced to implement nine programs jointly with African countries, demonstrating its continued commitment to Africa and the sustained momentum of China-Africa cooperation.

At Thursday's coordinators' meeting on the implementation of the outcomes of the 8th ministerial conference held in virtual format, Wang said China and Africa had jointly implemented the outcomes with good progress and brought tangible benefits to the African people.

Noting that this year marks the 20th anniversary of the founding of the African Union (AU), Wang said China and Africa should unite more closely to pursue common development and revitalization, and earnestly build a China-Africa community with a shared future in the new era.

He then put forward a five-point proposal:

First, both sides should uphold the principle of sincerity, real results, amity and good faith, and strengthen unity and mutual assistance. China is ready to work with Africa to carry forward the Five Principles of Peaceful Coexistence, practice true multilateralism and jointly safeguard the legitimate rights and interests of developing countries.

Second, both sides should be committed to common development. China will continue to take an active role in Africa's major infrastructure construction, continue to increase imports from Africa, support the growth of Africa's agriculture and manufacturing industries, and expand cooperation in emerging industries.

Third, both sides should be committed to independence and jointly promote regional peace. China will continue to support African solutions to African issues, oppose external interference in the internal affairs of African countries, and oppose creating confrontations and conflicts in Africa.

Fourth, both sides should uphold traditional friendship and promote people-to-people exchanges. China is ready to overcome difficulties caused by the pandemic and help African students who previously studied in China to return. China supports think tanks, media, non-governmental organizations, youth and women of both sides to strengthen exchanges and cooperation.

Fifth, both sides should adhere to openness and win-win cooperation to promote the sound development of international cooperation with Africa.

The meeting was attended by Aissata Tall Sall, foreign minister of Senegal, the African co-chair country of the FOCAC, as well as representatives of African subregions and the AU Commission, and diplomatic envoys of African countries in China.

The African side is willing to work with China to continue to strengthen the construction of forum mechanisms and promote the continuous upgrading of Africa-China cooperation, according to the African diplomats. ■ 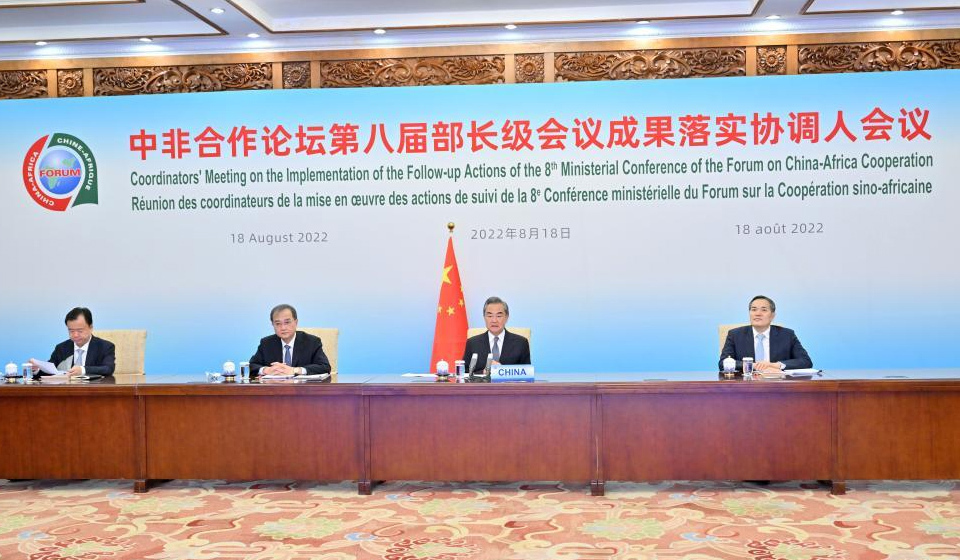