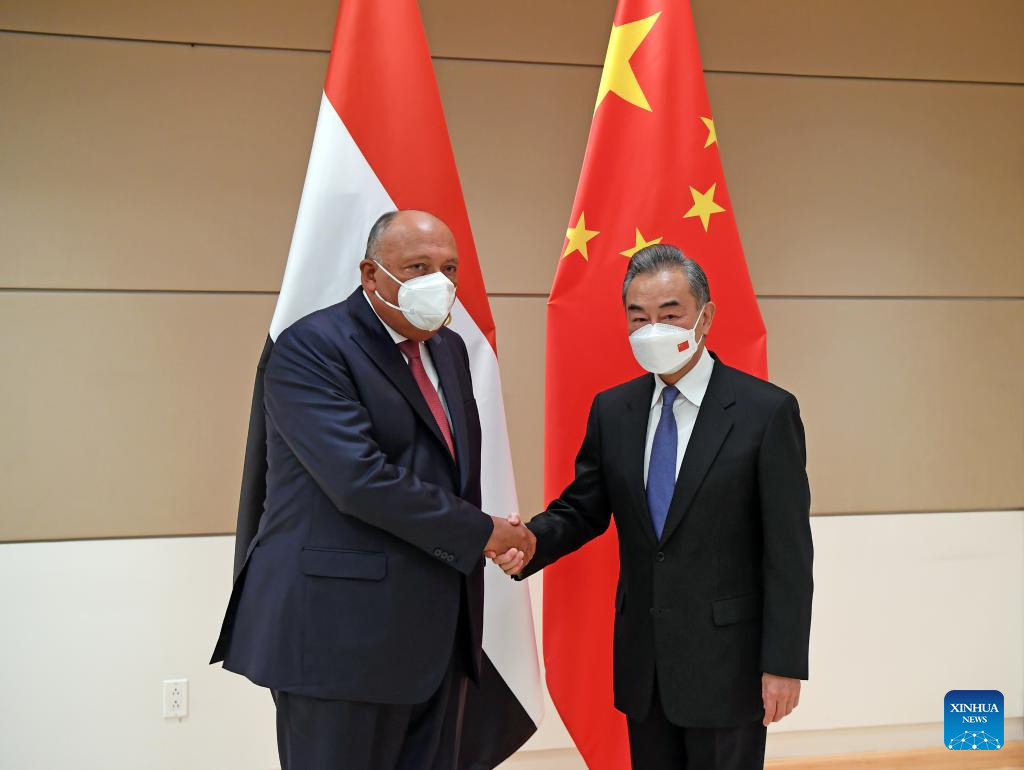 Wang said that close contacts between Chinese President Xi Jinping and his Egyptian counterpart, Abdel-Fattah al-Sisi, have provided strong strategic guidance to China-Egypt relations, adding that the two countries' joint fights against the COVID-19 pandemic and cooperation to boost their development have facilitated a growth momentum of bilateral comprehensive strategic partnership.

China firmly supports the Egyptian people to explore a development path fitting their own country, as well as the cause of national rejuvenation by the country, said Wang, adding that China is willing to strengthen mutually beneficial cooperation with Egypt and intensify their unity and coordination in international and regional affairs, so as to safeguard the two countries' common interests, legitimate rights of developing countries, as well as fairness and justice.

For his part, Shoukry said that Egypt and China have always respected, trusted and supported each other, adding that the Egyptian side is proud of a strong bilateral relationship with China and satisfies with the two's practical and fruitful cooperation.

Egypt firmly sticks to the one-China policy, opposes any behavior that violates the one-China principle or escalates the situation, said the Egyptian foreign minister, adding that his country supports China to take rightful steps to safeguard its sovereignty, and opposes forming any anti-China camp or creating differentiation and confrontation.

Egypt is ready to work closely with China in multilateral coordination to safeguard the solidarity of developing countries, he added.

The two sides agreed to promote the joint construction of the high-quality Belt and Road, sign the implementation plan as soon as possible, strengthen the second five-year outline document of China-Egypt comprehensive strategic partnership, and expand financial cooperation.

Stressing that the development of China is an opportunity for Egypt, Shoukry said that Egpyt welcomes Chinese investment and looks forward to strengthening tripartite cooperation in Africa.

The two sides also agreed to further strengthen cooperation in response to climate change, and China supports Egypt in successfully hosting the 27th session of the Conference of the Parties to the UN Framework Convention on Climate Change.

The two sides also expressed concerns over the shortage of food and energy caused by the spillover effects of the Ukraine crisis, and believe that political settlement of the issue should be reached, global economic recovery should be promoted at an early date, and the legitimate rights and interests of developing countries should be effectively safeguarded.