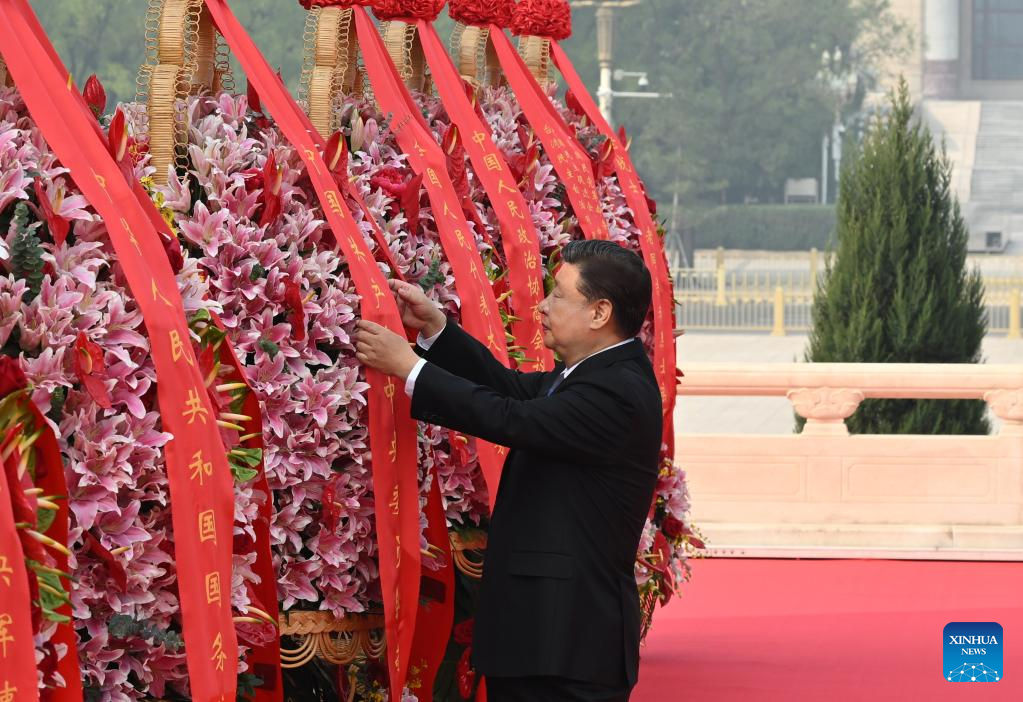 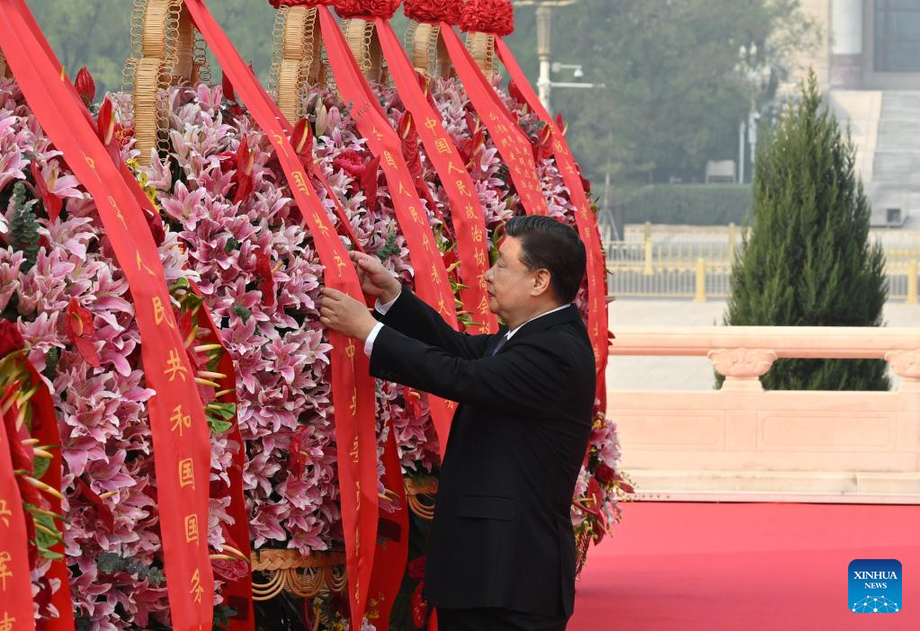 Xi Jinping straightens the red ribbon on flower basket during a ceremony to present flower baskets to fallen national heroes in Tian'anmen Square in Beijing, capital of China, Sept. 30, 2022.

Xi Jinping and other leaders of the Communist Party of China and the state attended a ceremony on Friday morning in Tian'anmen Square in Beijing to present flower baskets to fallen national heroes.

The event was held to mark Martyrs' Day, a day ahead of the National Day in China.

At the grand Tian’anmen Square, the national flag flies high and conspicuously and the Monument to the People’s Heroes stands majestically. A huge display in the shape of a flower basket is placed in the square center. Words in it read “Best wishes to the motherland,” expressing the wishes for a more prosperous and stronger China, and “Looking forward to the CPC 20th National Congress,” conveying the high expectation of the whole Party, the armed forces, and the Chinese people of all ethnic groups for the upcoming congress.

The band of the People’s Liberation Army (PLA) played the trumpets, blowing the “Martyrs’ Day Bugle.”

“Guard of Honor on your marks!” At the word of command, 30 PLA guards of honor marched to the front of the monument with parade steps and stood still, holding their guns.

At 10 a.m., the ceremony commenced. The military band played the national anthem “The March of the Volunteers” and all participants sang.

Then, they paid a silent tribute to the martyrs who devoted their lives to the liberation of the Chinese people and the development of the People’s Republic of China.

After that, a group of children, holding flowers in their hands and facing the monument, sang the song “We Are Communist Successors” and saluted to the monument as Young Pioneers.

In front of the formations, nine large flower baskets were placed in a line in the names of the CPC Central Committee; the National People’s Congress Standing Committee; the State Council; the National Committee of the Chinese People’s Political Consultative Conference; the Central Military Commission; non-communist parties, All-China Federation of Industry and Commerce, and patriotic persons without party affiliations; people’s organizations and people from all walks of life; veterans, retired senior officials and relatives of martyrs; as well as the Chinese Young Pioneers. “Eternal Glory to the People’s Heroes,” read the golden characters in the red ribbons hung on the flower baskets.

As the military band played the soulful “Flower Presenting Melody”, 18 guards of honor steadily lifted the baskets, walked slowly to the monument and laid them on the pedestal.

Xi and other leaders of the Party and the state walked onto the pedestal and stopped in front of the flower baskets. Bright-colored anthuriums, fragrant lilies, and blossoming oncidiums… all were telling people’s cherished memory of and sincere respect for the deceased heroes.

Taking a few steps forward, Xi carefully straightened the red ribbons, and led other leaders in a walk around the monument to pay tribute.

Since the 18th National Congress of the CPC, under the strong leadership of the CPC Central Committee with Comrade Xi Jinping at its core, the Party, the armed forces, and the people of all ethnic groups have been forging ahead in solidarity, achieving historic accomplishments and transformations in the cause of the Party and the state. Sustaining the spirit of the martyrs and drawing on strength from it, China will surely write a more glorious chapter on the new journey to the second centenary goal of building a modern socialist country in all respects.

Children and other attendees also laid bouquets of flowers at the foot of the monument and paid tribute.

The ceremony was presided over by Cai Qi, member of the Political Bureau of the CPC Central Committee and secretary of the Beijing Municipal Committee of the CPC.

Leading officials from central authorities and Beijing municipal government, representatives of non-communist parties and the All-China Federation of Industry and Commerce, non-party individuals, veterans, senior officials, the families of martyrs, recipients of national medals and honorary titles, representatives of groups and individuals who have made outstanding contribution to the Beijing 2022 Winter Olympics and Paralympics and representatives from all walks of life also participated in the ceremony.