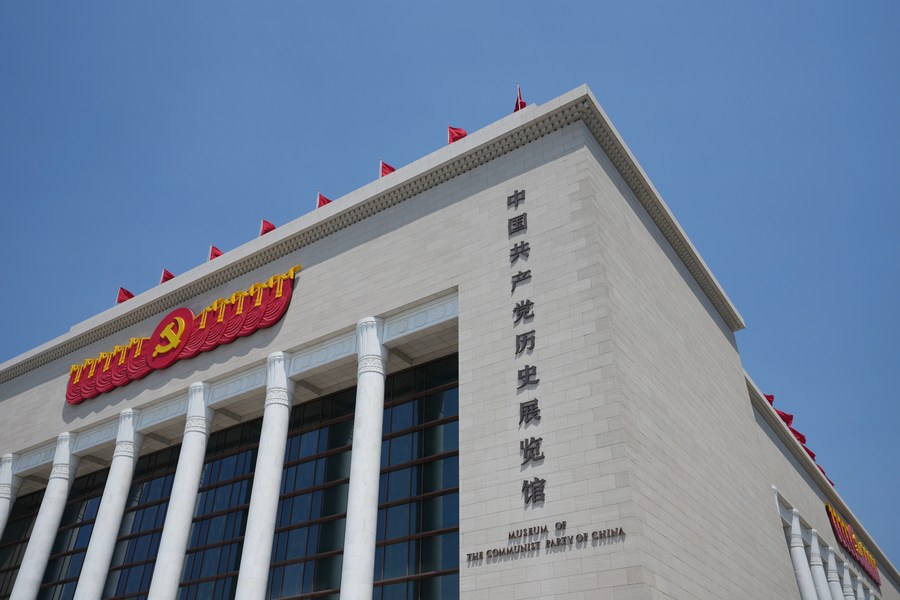 Photo taken on June 22, 2021 shows an exterior view of the Museum of the Communist Party of China in Beijing, capital of China. (Xinhua/Ju Huanzong)

BEIJING, Sept. 21 (Xinhua) -- "Every citizen is entitled to the rights and at the same time must perform the duties prescribed by the Constitution and other laws."

On Dec. 3, 2021, students of Shanxi Agricultural University (Taigu Campus), under the guidance of their teachers, recited the Constitution in a morning recitation marking National Constitution Day, which falls on Dec. 4 every year.

This was among the activities held in various forms across the country to promote public awareness of the Constitution during the yearly "Constitution Awareness Week."

The Communist Party of China (CPC) Central Committee has included comprehensively advancing law-based governance as a part of China's Four-pronged Comprehensive Strategy for building socialism with Chinese characteristics since the 18th CPC National Congress in 2012. The other three prongs are building a modern socialist country, deepening reform, and strengthening Party self-governance.

Over the years, the central Party leadership has acted with resolve and intensity as never before to comprehensively advance law-based governance.

On May 28, 2020, the lawmakers at the Great Hall of the People broke into long applause as the Civil Code was adopted by the legislature.

Hailed as "a declaration of the people's rights in the new era," the law marks a landmark achievement in terms of advancing law-based governance and is of great significance to accelerating the building of a socialist country based on the rule of law.

Over the past 10 years, the CPC Central Committee has combined top-level design with the practice of rule by law.

They set the grand blueprint, roadmap, and construction drawings for advancing the rule of law in all respects in the 14th Five-Year Plan period (2021-2025), putting in place a general pattern for comprehensively advancing law-based governance.

The Yangtze finless porpoise, a rotund creature with its mouth fixed in a permanent grin, is known in China as a "smiling angel."

Porpoises in groups spyhopping above the surface of the Yangtze River is now a usual summer scene again at the lower reaches of the Gezhouba Dam in central China's Yichang City, due to enhanced ecological protection efforts underpinned by the enforcement of the Yangtze River Protection Law.

Accelerated legislation for environmental protection over the past decade has boosted China's ecological and environmental governance.

The National People's Congress and its standing committee have formulated a total of 70 laws, revised 238 laws, passed 99 decisions on legal questions and other major issues, and issued nine legal interpretations since the 18th CPC National Congress.

To improve law-based governance, it is crucial to safeguard judicial impartiality. The country's judicial organs have followed the principle of seeking truth from facts and correcting any mistakes, resulting in the correction of wrongful convictions of criminal cases in accordance with laws over the past decade.

The central Party leadership has, since the 18th CPC National Congress, upheld a people-centered approach, safeguarded the rights and interests of the people, and guaranteed the people's sense of fulfillment, happiness, and security with the rule of law.

Progress has been made on deepening reforms to streamline administration, delegate powers, improve regulation, and upgrade services.

Efforts have been made to scrap redundant certification requirements and strengthen the provision of legal aid for people in difficulties and safeguard their legitimate rights.

For example, the implementation of a case docketing and registration system further solves the difficulties of case filing, with an average on-the-spot case registration rate of 95.7 percent as of June 2022.

The law-based governance has empowered economic and social development, elevating China's governance to a higher level. ■