The vast land of Xinjiang boasts three mountain ranges and two basins. It stretches as far as eyes can see, to places where lush pastures extend to horizon. Countless flocks and herds roam on the green land, where Chinese of all ethnic groups join hands to transform Gobi deserts into oasis, adding vitality to the beautiful land of Xinjiang. 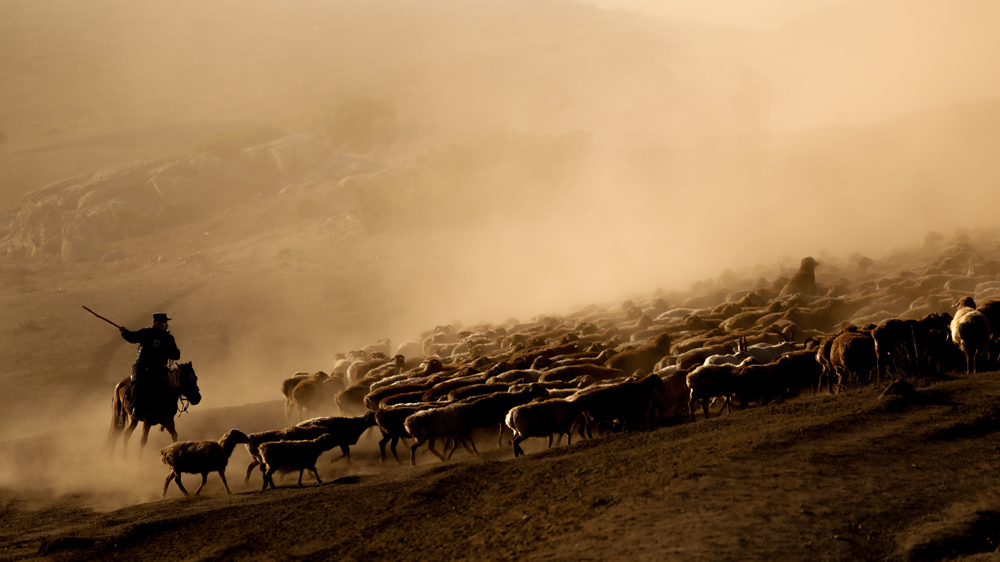 The ancient Silk Road that connected then Chinese capital Chang’an and Rome ran through Xinjiang. The vicissitudes of times have seen camels criss-crossing endless deserts, and the sun setting behind the mountains far away. Our great forebears, adventurers and explorers alike, left their footprints in trade and cultural exchanges on the mysterious land of Xinjiang, triggering endless imaginations for future generations.

It was here that Lin Zexu, a famous patriot, the loyal minister of the imperial court in Qing Dynasty who fought the opium trade, lived in exile after being sacked. Lin left to us the famous poem that “I shall dedicate myself to the interests of the country in life and death, irrespective of personal weal and woe”. Lin’s footprints covered both sides of the Tianshan Mountains, prospecting the territory, encouraging agricultural activities, dredging Kan’er wells and leaving behind legacies that benefited one generation after another.

It was here that a battalion of Han Dynasty troops took off their military uniforms and settled down for development. They buried the hatchet and turned swords into plowshares, transforming farming villages into cities. They were defending national borders and the ecosystem here. Today, the Xinjiang Production and Construction Corps have taken up a similar role, becoming modern-day “boundary markers” that will never fade away.

It was from here that enchanting melodies spread across the country and became tunes that echo in the hearts of generations of Chinese. Household songs such as the “The Girl of Darban City”, “Alamu Khan”, “Why Are the Flowers So Red”, “Xinjiang is a Good Place”, “The Grapes of Turpan are Ripe” and the “The Shepherd of Koktokay” are odes the beauty of this land, and the infinite love of the Chinese people for Xinjiang.

Xinjiang, with its exotic scenery, bountiful produces, unique charm and ever-changing looks, has drawn the attention of the world.

Unfortunately, exactly because of its vastness, many people have failed to see its full picture; and few have been there because it sits so far away in the hinterland of the Eurasian Continent. Worse still is the fact that people with ulterior motives are pouring dirty water on Xinjiang ...

The Guangming Daily research team recently paid a visit to Xinjiang, walking into its streets and communities, and villages and towns, to find out how the locals live and work, and how they perceive the changes that have taken place.

Let’s start the journey and walk into a real, full-dimensional Xinjiang.

With great virtue comes great success. Labor has nourished our virtue and shaped the landscape of the places we live. For thousands of years, people of all ethnic groups in Xinjiang have explored the land under their feet with hard work and diligence. Today, people in Xinjiang are passing on this spirit. Every ethnic group and every worker deserves a solemn salute, for they have created a prosperous Xinjiang under the leadership of the Communist Party of China. 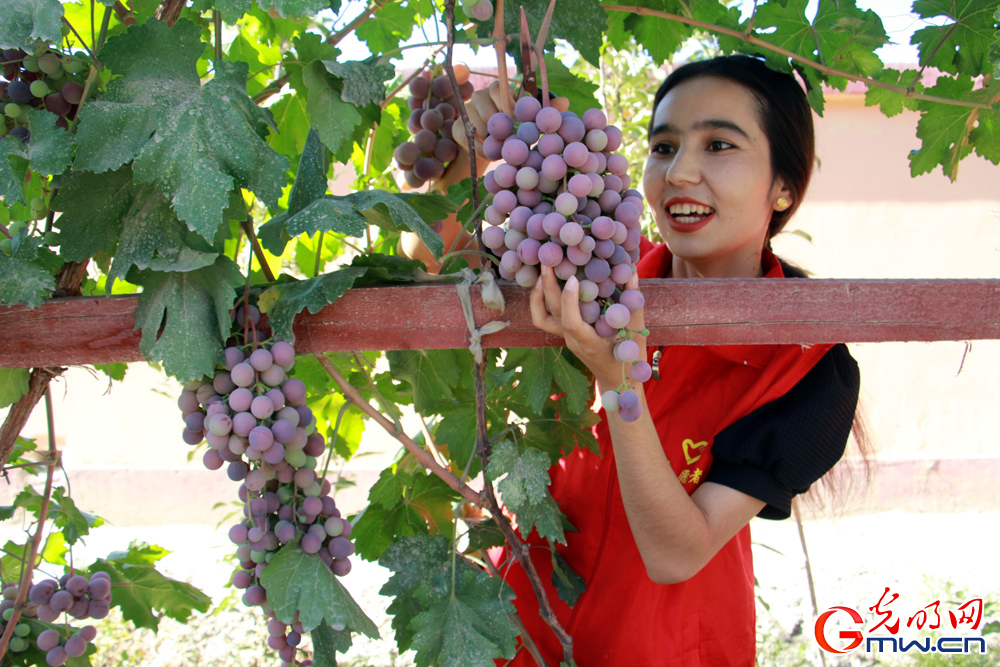 Against the scorching heat of the vast Gobi in the west of Aksu, we walked into a 65,000-mu (4,333-hectare, or 10,708-acre）fruit orchard of Hongqipo Group in late June. It seemed as if we could hear the sizzling sound of apples, pears and grapes turning juicy and sweet under the sun.

According to He Zhangwei, technical director of the orchard, only 50 workers are needed to manage the entire orchard. The whole process is mechanized, which improves the efficiency by 90% and reduces the cost by 90%. “Now we use tree planters, machine ploughs, straw crushers and electric, intelligent and driverless tractors.” He pointed to the drone flying over and said, “This is our drone supported by the Beidou navigation system and it’s spraying fertilizer now. All you need is to mark the longitude and latitude of the orchard on your phone, and the drone will take care of the rest.”

With two basins sitting in between three mountain ranges, Xinjiang is blessed with over 100 million mu of arable land, where large agricultural equipment can be used to great effect. “Science and technology” have become the highlight of Xinjiang’s agriculture, where the mechanization rate for main crops has reached 85.48%.

In Wensu County–Xinjiang’s key cotton producer in Aksu Prefecture, hundreds of thousands of acres of cotton is blossoming with milky white, light pink, and light yellow flowers. Although cotton-picking season has not yet arrived, standing here, one can imagine the spectacular harvesting scene in autumn.

The ample sunshine, warm wind, and the water melted from snow are blessings for cotton. Quality of the cotton produced here is second to none in the world: the cotton lint is long and soft, and the color is pure and clean. The long-staple cotton in Xinjiang not only has good looks, it’s highly elastic, durable and wear-resistant. Its fiber is 35% longer than that of ordinary cotton. The air permeability of cloth made of Xinjiang cotton is 5 times that of ordinary cotton. Cotton production in Xinjiang accounts for 89.5% of China’s total, and 20% of the world’s. 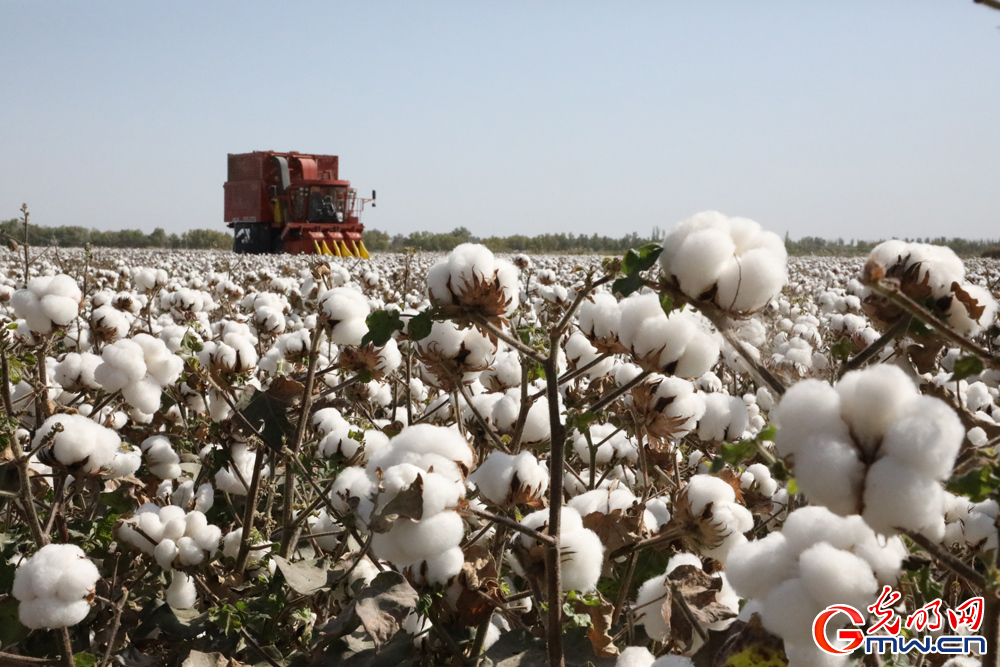 “Cotton farms nowadays are increasingly less reliant on human labor. Machines get to do most of the job from plowing the land to picking the cotton. You’d see if you come in autumn, that cotton-picking machines neatly line up in a row, the entire farm could be harvested with only a few round trips. It is such an enjoyable scene. Last year I earned nearly 3 million yuan, and labor cost was only a fraction of that”, said Manuti Daouti, a cotton farmer who planted 3,000 mu of cotton.

Aymel Tulhong is a large cotton farmer in Xayar County of Aksu Prefecture. Last year, his planting area exceeded 1,900 mu thanks to the alluring income from the cotton business. “Cotton picking was completed within one week, and I earned over 1 million yuan because of these machines”, he said. 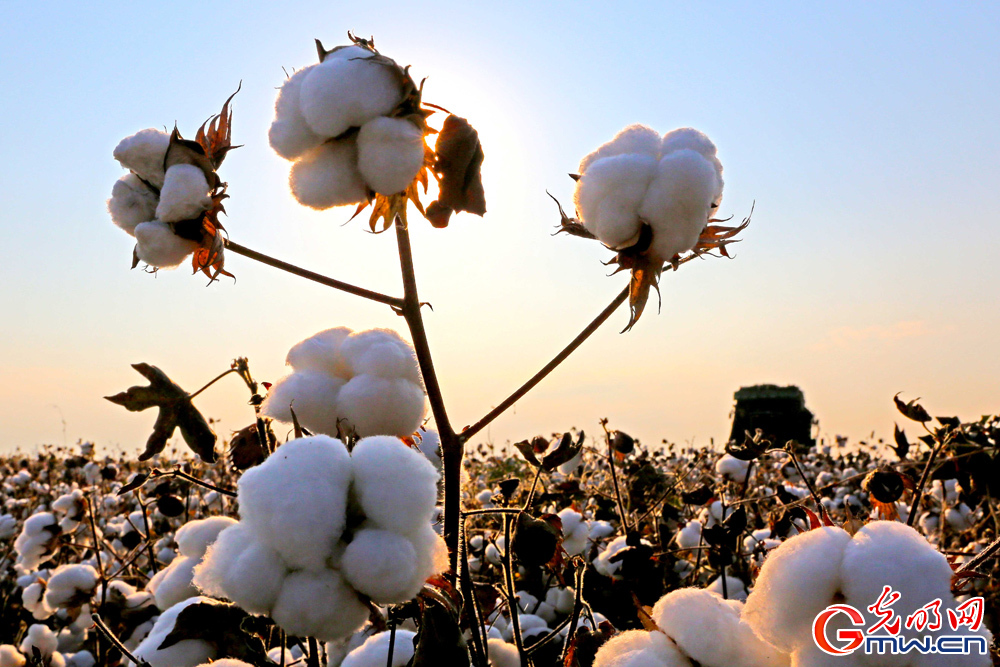 Statistics show that the mechanized harvesting rate of cotton in 2021 exceeded 80%, and 95% of the cotton in northern Xinjiang was picked by machinery.

There are also some small plots not suitable for mechanized picking and need to be picked by hand. However, in Xinjiang, hand-picking is an attractive job due to the lucrative pay. In the two-month harvesting season, not only locals in Xinjiang rushed to the job, cotton pickers from Shandong, Henan, Gansu and other parts of the country would also join the silver-hunting game. A skilled cotton picker can earn more than 20,000 yuan in two months. Maimaitimin Atagula, a local farmer in Hotan, said that last year he and his wife earned nearly 20,000 yuan after working 40 days in Aksu. “We’re definitely going again this year”, he said.

Our reporters heard this Uygur proverb along the trip: “The hard-working get to eat lamb leg, and the lazy drink cold water.” On both sides of Tianshan Mountains, working has become a spontaneous choice for people of all ethnic groups in Xinjiang. The people of Xinjiang today are creating happy lives by doing decent jobs of their voluntary choice.

Statistics show that in 2021, the per capita disposable income of urban residents in Xinjiang exceeded 37,000 yuan, and for rural residents, the figure exceeded 15,000 yuan, both had grown more than 100 times from that of 1978. Today, 2,020 service stations for outdoor workers and 4,622 lounges and breastfeeding rooms for female workers have been built in industrial parks with a high concentration of workers.

Xinjiang Siwei Textile Company is a cotton enterprise that came into operation last year in Aksu’s Awati County. Buyhemuti Toheti, head of the company, said with anger: “Some people are so jealous that they smear Xinjiang with ‘forced labor’. They must be thinking with their toes: why would anyone force us to pursuit a happy life?”

The white cotton is the “flower of happiness” for the people in Xinjiang. In the United States, however, there is a dark history of forced labor associated with cotton. The white cotton in southern US was once soaked with the blood and tears of black slaves – it’s a sin that the US can never wipe off.

Black slaves, inadequately clothed and fed, exhausted all their strength for cotton picking under guns and whips. In 1860, cotton production in the US was 130 times what it had been in 1800, behind which was the unimaginable physical and mental devastation of the blacks.

The value of labor squeezed from black slaves by American slaveholders amounted to $14 trillion in current prices. According to statistics, in 1850, 80% of US exports were produced by slaves. It was slavery, rather than democracy, that paved the US and West’s way to prosperity.

Even today, US immigration law remains supportive of modern slavery, and there is a strong correlation between certain visa types and forced labor. Studies have shown that over 70% of victims of forced labor in the US arrived with a legal visa.

Cotton, flawlessly white and pure, is nature’s blessing to Xinjiang. To boycott Xinjiang’s cotton is to reject the gift from nature.

The so-called “Uyghur Forced Labor Prevention Act” shows how the US is blatantly meddling in Xinjiang’s affairs, and flagrantly interfering with China’s internal affairs to achieve the goal of “containing China with Xinjiang”. This is a manifestation of bullying and hegemony, and a dangerous, provocative move.

But how can anything ever be achieved by inciting the boycott of Xinjiang’s cotton?

An overseas netizen once launched a challenge to “reject Made-in-China products”, and the result was a bleak one: the challenger ended up running almost naked on the street, wrapped only in a green bath towel.

This is not to say that China is unstoppable, but rather, we live in a global village and are bonded together in one way or another. Xinjiang’s cotton has been warming our day-to-day life, and it’s not something that people can cut off easily. The question for those Western politicians demanding the boycott is, are you ready for a “naked run”?