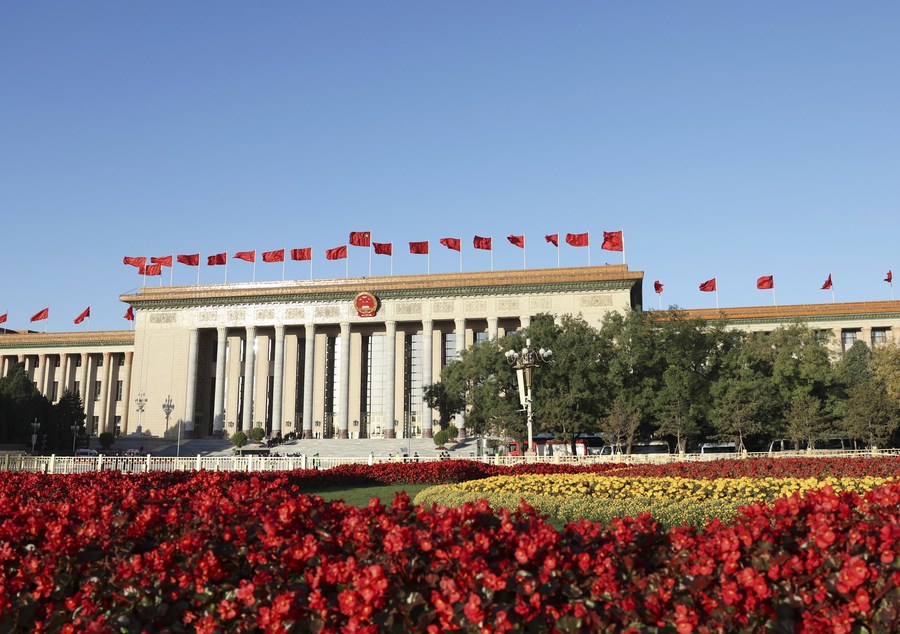 This photo taken on Oct. 22, 2022 shows the Great Hall of the People in Beijing, the capital of China. (Xinhua/Chen Jianli)

BEIJING, Oct. 25 (Xinhua) -- Leaders of political parties, governments and heads of state worldwide have sent congratulations to Xi Jinping on his election as general secretary of the 20th Central Committee of the Communist Party of China (CPC).

Head of the Fatah party and Palestinian President Mahmoud Abbas said he wishes Xi continuous success in fulfilling his noble missions and tasks, leading the CPC and Chinese people to achieve their goals and enjoy a peaceful, stable and prosperous life.

Leader of the United Democratic Alliance party and Kenyan President William Ruto said on behalf of the Kenyan people and in his own name, he would like to warmly congratulate Xi on the election as general secretary of the CPC Central Committee.

Xi's people-centered and dedicated leadership has set an example, Ruto said, adding that Kenya looks forward to working with China to build a vibrant Africa-China community with a shared future.

The Thought on Socialism with Chinese Characteristics for a New Era proposed by Xi has greatly encouraged developing countries to creatively explore development paths suited to their national conditions, he said, adding that he firmly believes that under Xi's leadership, the Chinese people will surely build China into a great modern socialist country.

The 20th CPC National Congress is of great significance not only to China but also to the whole world, said Aleksandar Vucic, leader of the Serbian Progressive Party, also Serbian president.

Noting that he believes that Xi will lead China to new achievements on the development path ahead, Vucic said Serbia looks forward to stronger friendly cooperation with China.

Czech President Milos Zeman congratulated Xi on his election, saying it is believed that under Xi's leadership, China will continue prospering, and cooperation between the two countries in various fields will bear new fruits.

President of Vanuatu Nikenike Vurobaravu said he firmly believes that under Xi's leadership, the CPC will continue to unite and lead the Chinese people to greater development achievements, and play a more important role in the international community.

Vurobaravu said he is looking forward to working with Xi to build a closer comprehensive strategic partnership between the two countries.

Dinesh Gunawardena, leader of the Mahajana Eksath Peramuna and prime minister of Sri Lanka, said he firmly believes that under the strong leadership of Xi, China will achieve greater progress, and the friendship and cooperation between Sri Lanka and China will be further deepened.