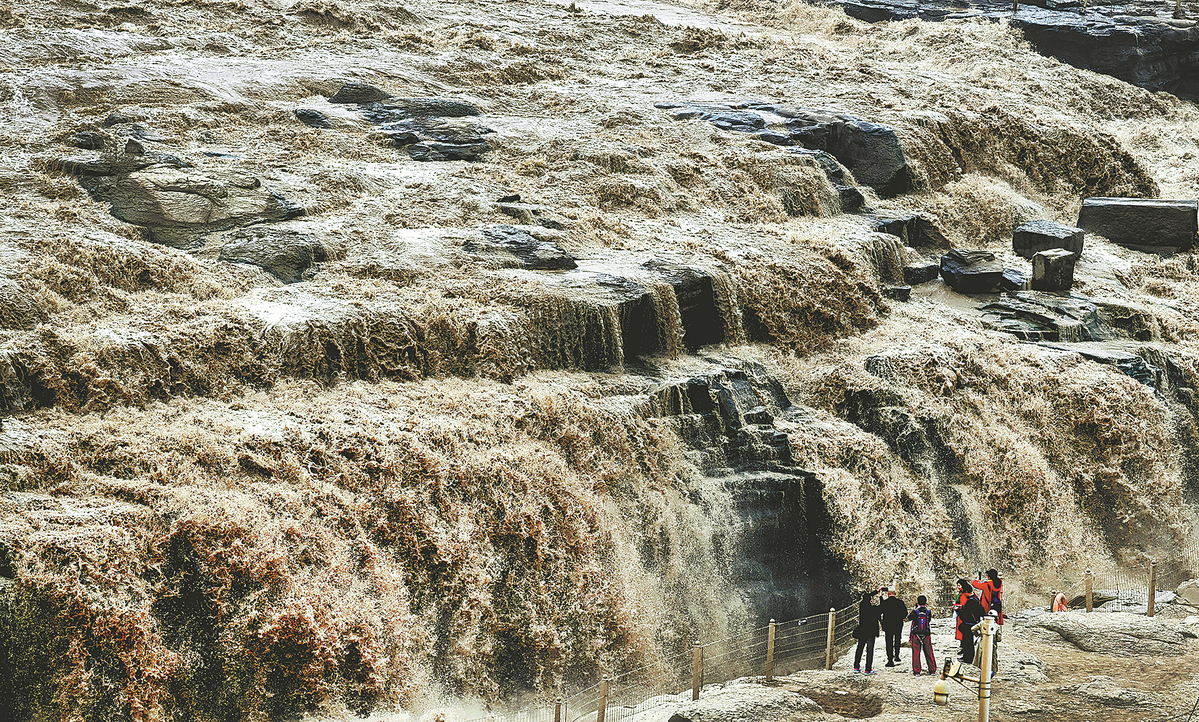 Visitors tour Hukou Waterfall on the Yellow River, which sits on the border of Shanxi and Shaanxi provinces, last month. (Photo/Xinhua)

China will bolster water conservation in the basin of the Yellow River while enhancing the management of water consumption quotas, according to the newly adopted Yellow River Protection Law.

The law was passed on Sunday after it was submitted to the Standing Committee of the National People's Congress, the country's top legislature, for a third reading. It will come into effect on April 1.

The national government will roll out measures to ramp up water conservation in the basin's agricultural and industrial sectors, as well as in its urban areas, according to the law. It is also obligated to boost the application of advanced water conservation technologies, as it strives to accelerate the formation of water-conserving ways of production and life in the basin.

The law makes it compulsory for county-level governments and above to promote highly water-efficient agriculture.

In addition to strengthening the construction of facilities for conserving water and metering water consumption, the government should promote drought-resistant crops to reduce water consumption in the agricultural sector, the law stipulates, adding that it's forbidden to tap deep aquifers for irrigation water.

It's the government's duty to intensify publicity and education to improve public awareness about saving water, according to the law.

The law asks local authorities to tap the potential of sewage in meeting some demand for water consumption. The national government will support them in constructing facilities in this regard, it said. Reclaimed water should be the first choice to meet demands in landscaping, afforestation, production and construction.

Yuan Jie, an official with the NPC Standing Committee's Legislative Affairs Commission, said water shortage is one of the most prominent problems in the Yellow River Basin, and water resources are the most important subject in the binding constraints in the law.

She said the law has fully followed the principle of planning development in accordance with the amount of water resources in the basin.

According to the law, major water consumers in the basin should fix online water metering facilities. Once found operating without such facilities, they will be charged in accordance with the daily maximum amount of water they can obtain.

If they fail to make rectifications within a prescribed time, they will be subject to fines of 20,000 yuan ($2,700) to 100,000 yuan, it says. If the circumstances of the violations are especially serious, the fines can be up to 500,000 yuan and their water consumption permits will be revoked.

Similar penalties will be imposed if companies consume more water than their quota and fail to complete water-saving transformation as required.

Upholding a holistic approach, the law aims to "properly handle the relationship between environmental and ecological governance and high-quality development in the basin", said Li Jinbin, a senior member of the NPC Environmental Protection and Resources Conservation Committee.