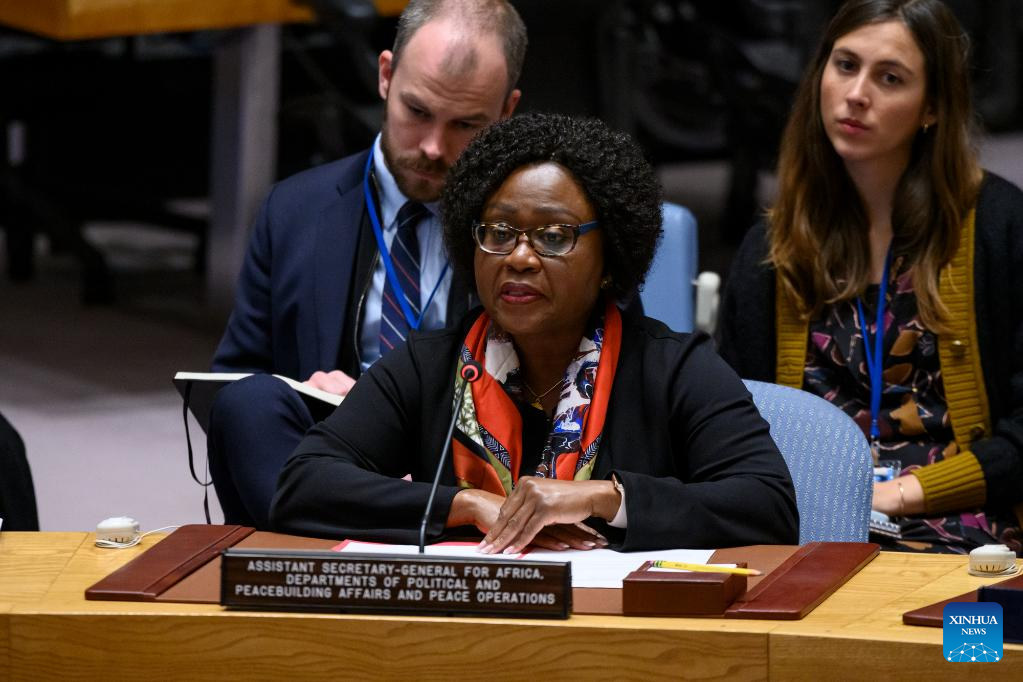 United Nations Assistant Secretary-General Martha Ama Akyaa Pobee (front) briefs a Security Council meeting at the UN headquarters in New York, on Nov. 22, 2022. A "holistic and long-term approach" is needed to address the root causes of and therefore effectively eliminate the threat posed by piracy and armed robbery at sea in the Gulf of Guinea, the UN official said on Tuesday. (Loey Felipe/UN Photo/Handout via Xinhua)

UNITED NATIONS, Nov. 22 (Xinhua) -- A "holistic and long-term approach" is needed to address the root causes of and therefore effectively eliminate the threat posed by piracy and armed robbery at sea in the Gulf of Guinea, a United Nations official said on Tuesday.

The instances of piracy and armed robbery in the Gulf of Guinea have continued to decrease, UN Assistant Secretary-General Martha Ama Akyaa Pobee told a Security Council meeting, while introducing a report by the UN secretary-general on the situation of piracy in the region.

The report found positive developments as the number of cases of piracy and armed robbery in the Gulf of Guinea decreased from 123 in 2020 to 45 in 2021. The trend has continued in 2022, with a total of 16 incidents of maritime crime reported between January and June.

However, Pobee pointed out that it is still too early to draw definitive conclusions with regard to this decline.

Attributing the steady decline, which began around April 2021, to concerted efforts by national authorities with the support of regional and international partners, Pobee noted that piracy in the Gulf of Guinea has morphed over the last decade.

Pirate groups are adapting to changing dynamics both at sea and in coastal areas. The recent decrease in instances of piracy may in part be attributable to the shift by criminal networks to other forms of maritime and riverine crime, such as oil bunkering and theft, which they likely view as both less risky and more profitable, she said.

Pobee called for greater efforts to establish a stable and secure maritime environment in the Gulf of Guinea.

"At the same time, the underlying causes, such as youth unemployment and inadequate access to public services, which render coastal communities vulnerable to being drawn into illicit and criminal activities must also be addressed," she said.

Pobee stressed that to effectively eradicate the menace posed by piracy in the Gulf of Guinea, national stakeholders, regional structures, and the international community must work in close collaboration to address the underlying social, economic, and environmental challenges that underpin the recruitment of individuals into maritime crime networks.

"This requires a holistic and long-term approach, in line with the Sustainable Development Goals and Agenda 2030 to address poverty and the lack of alternative livelihoods, youth unemployment and underemployment," she said.