JIUQUAN, Nov. 28 (Xinhua) -- Chinese astronauts Fei Junlong, Deng Qingming and Zhang Lu will carry out the Shenzhou-15 spaceflight mission, and Fei will be the commander, the China Manned Space Agency (CMSA) announced at a press conference on Monday.

Fei once participated in the Shenzhou-6 spaceflight mission and both Deng and Zhang are newcomers to space, according to Ji Qiming, assistant to the CMSA director.

"I'm very proud to be on a mission again. I'm very excited to be stationed in China's space station. I'm proud of my great motherland," said Fei when he met the press for the upcoming mission.

Deng, who became one of China's first 14 trainee astronauts 24 years ago, had offered support for several space flights as a backup. "I will cherish this opportunity to fly into space and fulfill my duty," said Deng at the press conference.

Zhang was selected as one of China's second batch of astronauts 12 years ago. "I am ready for my first space flight," said he. "I will fly for my personal dream and fly for our nation's dream."

Talking about the upcoming work handover with the Shenzhou-14 crew, Zhang said "we have gifts for them, but we'll keep it a secret for now." 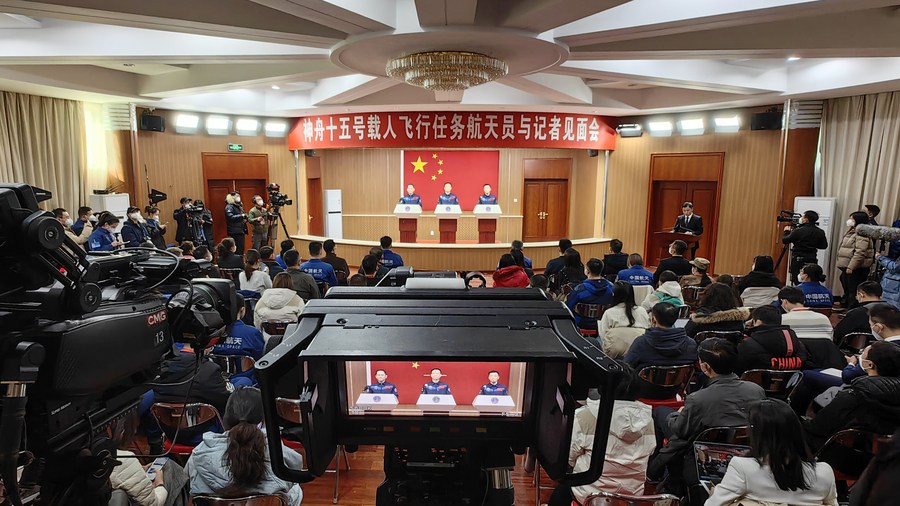 He added that the trio will stay in orbit for six months and return to the ground in May next year according to the plan.

During the mission, the Shenzhou-15 crew will carry out verification of long-term residence in China's space station at its three-module configuration. They will also unlock, install and test 15 scientific experiment cabinets, and carry out more than 40 experiments and testing in the fields of space science research and application, space medicine, and space technology.

They will conduct extravehicular activities (EVAs) three to four times and complete the installation of the Mengtian lab module extended pump sets and the exposure payload platform, said Ji.

The crew will also verify the exit mode of the cargo airlock cabin of the Mengtian module, and cooperate with the ground to complete six cargo exit tasks. They will perform regular platform testing, maintenance, and space station affairs management, said Ji. 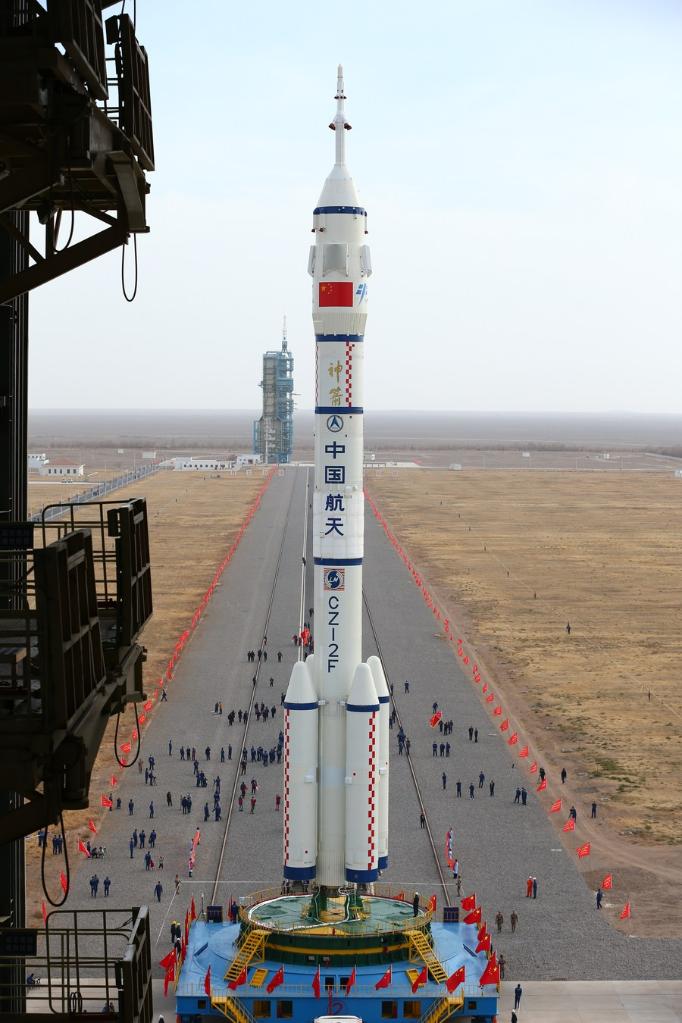 The combination of the Shenzhou-15 crewed spaceship and a Long March-2F carrier rocket is to be transferred to the launching area in Jiuquan Satellite Launch Center in northwest China, Nov. 21, 2022. (Photo by Li Yunxi/Xinhua)

The Shenzhou-15 manned spaceship is scheduled to be launched at 11:08 p.m. Tuesday (Beijing Time) from the Jiuquan Satellite Launch Center in northwest China. The launch will be carried out with a Long March-2F carrier rocket.

After entering orbit, the Shenzhou-15 spaceship will make a fast, automated rendezvous and dock with the front port of the space station's core module, Tianhe. The space station will then be expanded to its largest configuration with three modules and three spaceships, having a total mass of nearly 100 tonnes, Ji said.

The three modules refer to Tianhe and two lab modules Wentian and Mengtian, and the three spaceships the cargo craft Tianzhou-5 and two spaceships Shenzhou-15 and Shenzhou-14.

Also on Monday, the CMSA announced that a number of space science application projects jointly selected by China and the United Nations Office for Outer Space Affairs or with the European Space Agency are being implemented as planned, and related payloads will be launched to get into China's space station for experiments next year.

China will also welcome astronauts from other countries to enter its space station to conduct experiments, said Ji at the press conference.