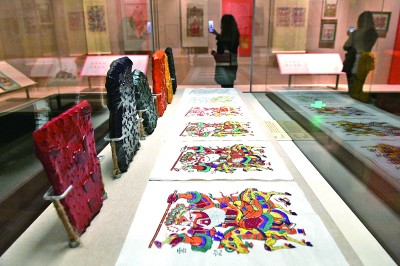 Photo taken on January 10, 2023 shows a visitor taking pictures of items on display at Guangdong Museum in Guangzhou, south China's Guangdong Province. The exhibition themed "China in New Year Pictures", which opened on January 10, 2023, showcases over 300 Chinese New Year pictures, including traditional and modern ones. Exhibited alongside are tools and procedures for making the New Year pictures. By combining the finished artworks with the traditional craft for making them, this exhibition offers visitor a comprehensive sense of the art of New Year pictures, or Nianhua. The exhibition is expected to last until March 29, 2023.(Xu Jianmei/Guangming Picture)